Research into the connection between salt and high blood pressure shows we may have been overly-anxious about sodium.

Sodium chloride intake it would seem has been a thorn in our flesh for far too long. It is true that most of us should add rather less to our food; research shows that it would have a moderately beneficial effect on any person suffering from hypertension. 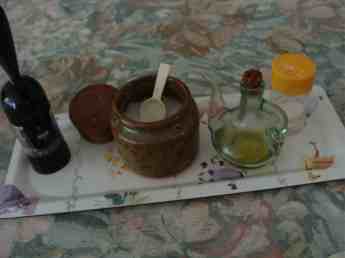 But new research from the institute of medicine claims that it is totally unscientific to insist we lower our intake below the recommended 2,3g of sodium per day; that is about one teaspoon of salt, or 5 grams. In fact, it will be harmful.

But the average American, and South African, still consumes nearly double the recommended 2300mg of sodium per day. So avoiding the really high-salt foods like packet soups, canned chicken noodle and spaghetti sauces is still on the cards.

Grains that have been highly refined become utterly tasteless, so we feel a need to add more salt and often sugar too.

We should cut back or avoid most of these anyway, for other reasons. Packet soups are full of chemicals; breakfast cereals are made with refined carbohydrate and sugar.

Refined mealie-meal porridge is a staple in South Africa. It has no flavour at all so we add far too much salt and sugar; a double whammy.

Think rather of making your own homemade, delicious and easy soup recipes. Honestly, those spaghetti sauces are nothing more than an onion, a tomato and a few herbs and spices; and a massive amount of salt.

This salsa de peppadew for example is so simple to make; use whatever chilies are available.

Seventy-five percent of the high sodium the average person ingests is already in the packaged foods they purchase at the supermarket; add more and you are seriously in trouble.

Apparently two-thirds of folk add salt to their food even before tasting it; that obviously is sheer silliness and I am going to test myself as well.

Bread too contains a lot of extra salt, and sugar too, not to mention the refined flour. Even so-called whole wheat may have had up to 40 percent of the goodies removed, mostly the germ and bran obviously.

Baking your own loaf using a machine is one of the simpler ways of reducing the unwanted content, and increasing the goodies; it takes only five minutes to prepare the dough. The extra choline alone makes it worthwhile.

This salt calculator will give you a rough idea of how much you consume, and whether you are within the guidelines.

"One in five South African children already has high blood pressure. The main drivers in adults are abdominal obesity, alcohol and excessive-salt intake."

- Professor Alta Schutte, President of the International Society of Hypertension.

Our bodies need sodium chloride, and too little increases insulin-resistance; great care must be taken not to overemphasize salt high blood pressure.

One cup of canned spaghetti sauce contains nearly half of your recommended daily allowance of sodium; 1100mg per serving.

Research about the connection between salt and high blood pressure reveals that, if we take too little, it raises cholesterol and increases insulin-resistance.

Do you suffer from vertigo or dizziness? Find them in the Site Search above.

"Breakfast cereals like corn flakes have the salinity of sea-water; bread is also stuffed with salt."

Top of the pops is the average pizza which has 1300mg sodium in two slices, and canned soups at 1600mg per can; both have more than half a teaspoon in one serving.

Make your own sourdough pizza; then you do not have to worry about salt high blood pressure. And try a few of these easy soup recipes.

What really muddies the waters is that the recommended no salt recipes, giving a total sodium intake of less than 2000mg per day actually

Sodium is a vital mineral in many processes in the body, not least the normal inner-ear balance mechanism. Are you suffering from vertigo or dizziness?

But if there's too much sodium in the blood then the body draws in more water to dilute it, raising our pressure. There are no symptoms but it leads unerring to catastrophic health outcomes.

There is not a shred of evidence showing that reducing sodium intake below 2300 mg provides a better outcome.

Another serious consideration concerning salt and high blood pressure is that the accompanying raised cholesterol often means statins are then prescribed; and they are strongly associated with an increased risk of becoming diabetic[3].

A meta-analysis (summary) of 13 studies however does indicate that high salt intake (over 3600mg of sodium) is strongly associated with higher risk of heart disease and stroke; twice as likely. That's massive.

The weakness of this study is that it compared two large groups, both taking too much salt, viz 8g of sodium vs 4g of sodium. Clearly the group consuming 8g per day was at a much higher risk of heart disease and stroke.

All things in moderation

So, the old adage still holds true. Too much salt is bad, too little salt is also not good for you.

Those at risk are anyone eating out regularly, and those relying on the food industry for their soups, sauces and pizzas; TV-dinners and fast food in general. Snacks like salted peanuts every day are a recipe for disaster.

New research published in the Journal American Medical Association in January 2015 again confirms that we have perhaps been overly concerned about salt intake. A study of 2600 older folk in fine fettle, over a ten year period, found no significant association between mortality and salt intake up to 2300 mg per day.

It is the whole diet that counts, and certainly those who eat out regularly may find themselves consuming far more than 2300 mg of sodium per day.

Just a can of soup contains about 1000 mg of sodium, and a couple slices of supermarket bread 350 mg.

Using a bread machine to bake your own, it takes only five minutes, gives you control over the salt in your bread. I use 1/2 tsp which contains 1150 mg sodium. One loaf makes 15 slices; 77mg per slice which is less than half of that in commercial bread.

This artisan bread menu recipe is dead easy, but you do need a baking machine; get one second hand; there are plenty about since it's the most underused kitchen appliance apparently.

Bernard Preston uses his every day; only five minutes work to make the most delicious loaf using the best ingredients, half the salt that may be causing your high blood pressure, and what's known as resistant starch; it's not fattening like your supermarket bread.

Just avoid canned soups totally; rather make one of our easy soup recipes.

Find out about resistant starch to get you a happy colon, and help prevent the neurodegenerative diseases like Parkinson's.

Tufts University research points out that salt is an acquired taste and just as we can retrain our mouths to enjoy more fibrous, chewy food, and less sugar so can we apply the same mindset to eating less of the mineral.

Tufts recommends embracing home cooking and eating less prepared foods; we could not agree more. It's a massive time-saver; in the future we'll be spending far fewer hours consulting doctors for heart conditions, sitting in the chair being dialized and purchasing medication.

Disturbing research after following 14,000 people with high blood pressure for ten years found there was no significant reduction in mortality by taking hypertensive medication; however changes of lifestyle were definitely associated with a lower risk of death.

Change of lifestyle plus the medication had the greatest benefit. They studied weight loss, smoking and physical activity; and diet and sleep-duration.

The salt high blood-pressure equation would certainly have been part of the dietary changes studied.

The buzzword today is food as medicine; researchers for example have shown that type-2 diabetics can get completely into remission by a change of lifestyle alone without any drugs.

Look rather to your own choice foods remembering that our slogan is nutritious food, made fast. There are so many recipes now available, but so many of them take up hours of your life; time you probably don't have. At Bernard-Preston.com you will find simple, good recipes; with none of the salt high blood pressure worries. Slow food made fast is our slogan.

And taste your food before adding any extra. If you are vigorous with normal blood pressure, then do not stress out.

According to a prominent heart surgeon, the inflammation in blood vessels that he views every day has been getting much worse. He attributes this to the switch to polyunsaturate omega 6 fats like sunflower, soyabean and corn in cooking oils and margarine.

In short, return to the foods that your grandmother served, and look twice, no five times, at the meals that your mother serves, before fussing over salt high blood pressure. Yes, and that includes returning to butter, in moderation.

More important perhaps is to make sure we are consuming on a daily basis those foods to enable the methylation of homocysteine, a toxic breakdown product of protein metabolism. At least four of the B group of vitamins are essential; they are folate, choline and betaine. B12 too is especially important.

"A whole grain should consist of the bran, germ and endosperm in the same proportions as found in nature.

This study determined that choline and betaine are particularly rich in the germ and bran[1]."

Commercial bread contains too much salt and, since most of the germ and bran have been removed even in so-called wholegrain flour, it is very low choline and betaine; the consequences for our blood vessels is devastating with resulting high blood pressure.

It's just one of the reasons we advocate milling your own flour and baking your own bread; the other of course is that your homemade-loaf tastes divine. 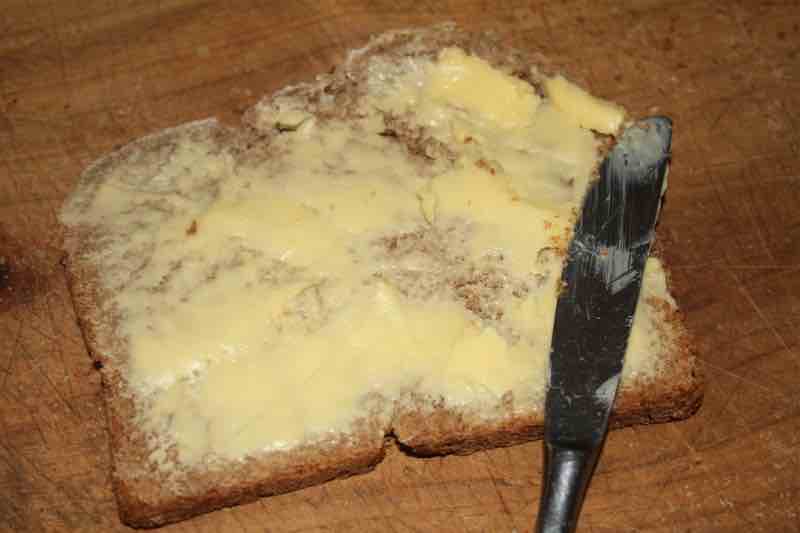 Homocysteine has been strongly associated with cardiovascular disease and senile dementia. Green leafy vegetables contain all the  benefits of folate enabling the body to break down the toxic compound.

These choline food sources supply yet another vitamin necessary for the break down of homocysteine and improve the overall well-being of your colon.

It is about overpopulating and feeding the friendly microbiota in your large intestine; then the pathogens, should they attack, are outnumbered and by sheer virtue of the population are overwhelmed; that is where the nasty twisted tor proteins come from in Alzheimer's disease. Do you know about the benefits of kefir?

And have you ever considered a homemade sauerkraut recipe? Food companies cannot make it half as tasty as you can in your own kitchen. To make it palatable and safe they have to add flavour enhancers and preservatives; it is no longer a probiotic.

Personally I am very suspicious of all these chemicals they add. Rather, let us turn the television off and make half an hour once a month to prepare our own homemade sauerkraut.

Are you worried about salt high blood pressure? Just eat out less often.

More recent research confirms that in ambulatory patients with heart failure, a dietary intervention to reduce sodium intake to less than 100 mmol, that is <1500 mg/day, did not reduce clinical events[5]. 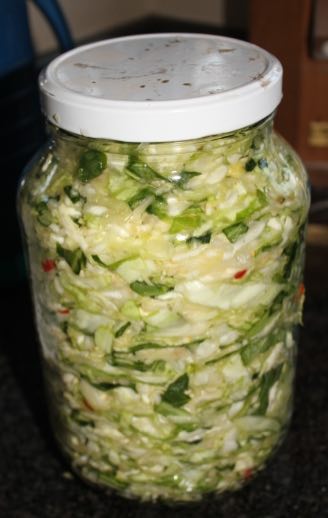