Stunting of children begins in the uterus and continues with how the newborn infant is fed. Two definitions are often used to which we add a third. 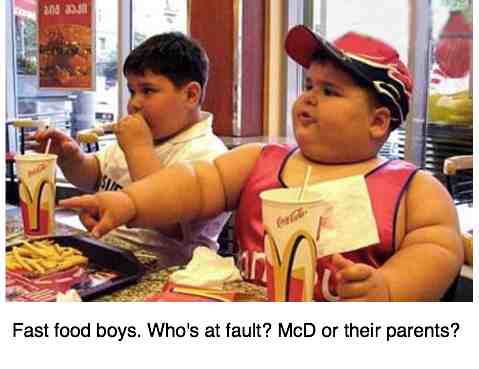 "Section 28 of the Constitution guarantees our children the right to basic nutrition. And yet, 27% of them under the age of five are stunted."

Some children are naturally short, and not physically stunted but worldwide this is reckoned to be no more than 3% of all kids. But in South Africa it has reached epic proportions with 27 percent of all kids under the age of five falling below the guidelines[1].

Add to that stuntedness of cognitive-development, and we have a catastrophe.

This page was last updated by Bernard Preston on 13th August, 2021.

Maternal under-nutrition means inevitably a poor start for children who will already be on the path to stuntedness even before they are born.

Adequate balanced protein for the development of a strong and normally tall body is non-negotiable; nor is a complete fatty acid complement for the rapidly expanding brain.

Add to that the multitude of microchemicals required from their food for a strong mother and child, and one grasps the need for sound nutrition. Just the deficiency of folate means the great likelihood of a neural-tube defect as in cleft lip or spina bifida.

Foods with high folate levels include a glass of freshly-squeezed, unstrained orange juice and a cup of spinach; more than half of the nutrients in citrus are found in the pulp. Stunting of children because of deficiency of vitamin B9 should be extremely rare but it is not.

There is an abundance of research that proves beyond any shadow of a doubt that breast-feeding is the best for the infant. How did we ever believe otherwise?

Whether it is the high-quality fats and protein, or the immunity to disease that is passed on, nothing can compare with the breast.

However unscrupulous infant-formula companies have targeted less well-educated mothers, and convinced them that their very expensive milk powder is far superior. Nestle have conceded that 60% of their products are not healthy.

For the wealthy it is less of a problem, but for the poor who can no longer afford the formula, but cannot return to breast-feeding, it is an unmitigated disaster; stunting of children is inevitable.

Mother's milk is high in one of the omega-3 fats called DHA; an astonishing 25 percent of the grey matter of the normal brain is made up of this nutrient. A deficiency would certainly lead to stunting.

Fatty fish, avocados and free range eggs are the best sources of DHA; dairy from pasture fed cows and freshly-ground flaxseed too. None of these are routinely available to the poor; but mother's milk from a well fed woman would provide it all.

The first two to three years are generally recognised as the most important; once the child reaches five, the damage done is permanent and cannot be reversed. The cognitive development will be impaired too and they will never reach their true potential.

Stunting of children is not only a third-world problem but is prevalent in the west too, if one includes mental backwardness from poor nutrition.

Stunting affects the development of a baby's brain, whether they will matriculate or not and their productivity as an adult. A person who is backward as a result of poor childhood nutrition will never reach their potential as a worker. The fallout on the economy is simply unimaginable.

The data shows that 27 percent of children under 5 are considered short for their age or stunted, and of them 10% are severely effected. 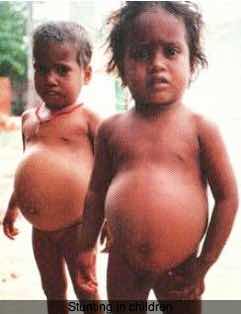 Kwashiorkor is one of the more obviously severe but less common signs of stunting of children.

It is caused by a severe protein deficiency. The low albumin in the blood results in a drop in the oncotic-pressure in the capillaries provoking the leakage of fluid into extracellular spaces known as ascites; swelling of the abdomen.

Of far greater concern is the less visible poor nutrition of more than a full half of South Africa's children in some areas that starves them of a meaningful future.

It also starves the country of strong and productive workers who are physically and mentally up to the challenges of a modern economy.

According to Wikipedia, South Africa loses about R15 billion annually in GDP to vitamin and mineral deficiencies arising from malnutrition, to which I would add micronutrient shortages; omega-3 would be one of the more obvious examples. They go on to state that it would cost less than 1/20th of that to alleviate the problem[3].

A balanced diet containing all the essential amino acids is absolutely necessary to prevent the stuntedness of Kwashiorkor; simply an egg and a glass of milk a day would go a long way to provide sufficient protein; they are both rich in albumin.

Free range eggs are probably more available to rural children, where the hens can roam unrestricted in cages or barns.

School feeding schemes in South Africa are based on polony, a relatively cheap processed meat byproduct known to cause tumours; and highly-refined mealiemeal, deficient in the protein, fat and vitamins found in whole corn. Neither should be allowed within the gates; they destine children to poor health and stuntedness.

Simply contracting with local farmers to supply a head of corn in summer, a glass of milk daily and an egg twice a week should be the aim of every school feeding-scheme; together with greens like spinach or cabbage.

In winter mealie meal porridge made from the freshly-ground grain would supply much of their needs. Instead it is highly refined from which much of the protein has been extracted.

How to grow spinach should be the aim of every rural school.

Many of those who are more financially able enjoy a cola or fruit juice for lunch; and sandwiches made using white bread. They are little better.

Lysine in chickpeas may be the solution. The World Health Organization recommends consuming 30 milligrams of this amino acid per day for each kilogram of body weight. A 1/2-cup serving of chickpeas contains 486 milligrams[5], enough for a 15kg child.

Total protein requirement for a 15kg child is fifteen grams.

Using dried chickpeas, at R23/kg which provides 15 cups, the cost would be less than R1 per child.

With the human brain consisting of more than 60 percent fat, it is no coincidence that mother's milk is very rich in these nutritious acids; in other animals the preponderance rather is protein so the tiny calf for example can grow physically quickly.

But human children need fat and protein; if either are in short supply there will be mental or physical stunting.

And then children of course need all the vitamins, minerals and phytonutrients that adults require for their well-being.

They too need whole grains and at least seven different coloured foods every day. Yet few children eat corn on the cob any longer; the affluent find it takes too long to chew and for the poor it is simply not available in cities.

There is continuing controversy in research circles about how much carbohydrate children need; all are agreed however that refined starches like white bread, sugary cakes and colas should be kept to a minimum.

There is no doubt that, with the average American consuming more than half a cup of sugar per day, there is stunting of children in the West too; the effect on the brain and behaviour is more apparent than shortness of stature.

Pellagra is a disease associated with an over-dependance of maize as a staple in the diet. Agricultural workers and the rural poor are particularly vulnerable. The disease affects the skin, gastrointestinal tract and brain; psychiatric manifestations are common.

Subclinical pellagra is highly prevalent in South Africa; a deficiency of B3, or niacin. It occurs primarily in countries where maize is the staple carbohydrate; it is low in the amino-acid tryptophan which can ordinarily be converted to the vitamin. Meat, chicken and avocados are rich sources; and legumes too.

The bio-availability of niacin, though present in maize is low; reports exist that cooked in the presence of an alkali, known as nixtamalization[8] frees the vitamin. Normally it is bound up in a complex with hemicellusose called niacytin.

Pellagra was common in Asia too amongst those on a subsistence diet of polished rice.

In short stunting of children should be rare in countries like South Africa, yet over a quarter of our kids are permanently disabled because of poor feeding schemes. We can expect nothing better from this or frankly any government; is it time to start digging for dignity?

This green mealie risotto made with brown rice is particularly nutritious with all of the vitamins and fibre found in whole grains.