Frog in my Throat is the first of three Chiropractic Bernard Preston books.

It's quite a venture of faith to write a book. Me, write a book? You must be crazy; and now I have six under the belt. I very soon discovered that I had no idea what demands would be made on me before I had a completed volume in my hand. Just as well, as I would probably never have started. But what a proud day the arrival of Frog was, despite the enormous energy and persistence it took.

And what a pleasant surprise it was when a fan wrote, saying how much Frog made her think, laugh and relax.

And this by a young student at AECC ...

"Thank you for re-inspiring me in my studies. I had lost my motivation and drive. Reading Frog gave that back to me."

Frog in my Throat is the first Bernard Preston novel; it covers the early difficult years of practising without a licence and he poses as a ghost; they have been described as gems funny and healthful from the life and work of a DC. 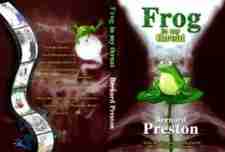 Probably the supreme moment came during an adaptation of Steven Covey's Seven Habits for Christians; yes, I am a Believer. Is there something left that you really want to do, he asks?

All the lights came on; I want to write a book. That day I made a choice to go in search of myself in quite another realm. Was there another depth, a capacity, yet unfilled and untapped?

Let me hasten to say this is not a religious book, but I do openly believe in the lordship of Jesus Christ in my life. I say it humbly, because I've made a lot of mistakes that bring him no glory.

Like Uriah Heap I hope to remain a humble man.

Read more: YOU MUST BE BORN AGAIN ...

I quite soon discovered that writing the first draft of a chapter was relatively easy. But editing it, that was altogether another matter. A bear! Each chapter of Frog has gone through at least fifteen formal edits, and was preceeded by at least another half dozen before that. Probably more. The first and last chapters were written, and rewritten at least twenty five times.

Then there's the matter of a publisher. And a formal edit by the official editor. A second nightmare! Letting go of one's baby is no easy business.

These suggestions have been the cure for my Writer's Cramp. EVERY WRITERS SIX Ds have saved me from oblivion as an author.

But did Bernard Preston believe in himself sufficiently to do it; and carry Frog in my Throat to completion? Do I really have stories worth telling, tales that people will delight in? Yes, absolutely, but needless to say, many were doubtful.

Was this another of Bernard Preston's absurd notions?

Not so. Here's my baby. She was very nearly stillborn.

And then the burden of distribution. Frankly, that has been the worst. I had no idea! Hence soon to move into the eBooks domain. A quarter of the price to you, and a thousandth of the labour for me.

But finally the sense of achievement, the great many people you meet along the way, the new experience of life in the complex new world of publishers and authors. It's been wonderful.

The back page says it all.

From the pen of a local DC come these delightful cameos of incidents and anecdotes and fascinating glimpses into the professional world of complementary practitioners.

Those who are familiar with James Herriot's vet stories will find Frog in my Throat a must read.

It's a great privilege just to be mentioned in the same breath as the great Herriot. I hope you will not be disappointed. He remains one of my all time favourite authors.

Here are four sample chapters, tidbits to whet your appetite.

From the publisher's desk

Bernard Preston D.C. has been practising as a DC for nearly thirty years, in one of South Africa's smaller towns. Known by widely differing patients from small children to famous artists in pain, he is well equiped to give us some fascinating insights into the world of complementary care. No holds are barred.

Bernie is married with two sons, and a daughter who is also a DC. He is a person who believes in the fullness of life both in a general sense, as you will soon see as you accompany him in his wide interests in nature, mountains, fishing, and gliding, beekeeping and carpentry; and, as a layminister in the Anglican church, in a religious sense. There are several stories about soaring the skies in his very old Ka6.

Preston's books are beautifully illustrated by Lorraine Harrison. Of Frogs, Bats and Stones, and now Tadpoles. 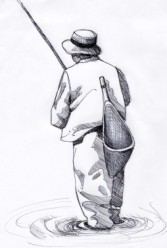 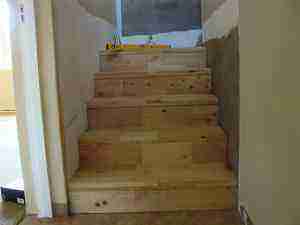