The basic ingredients for sourdough bread are really very simple; flour, unchlorinated water and salt. And of course the culture that pre-ferments the starch and gluten, lowering the glycemic index and stopping those collywobbles.

Sigh, so many of us have needlessly given up bread and pizza; just learn to make sourdough. It's the way it has been made since Adam and Eve and nearly came to an end when the food manufacturers got clever. My recipe will take just five-minutes of your time every morning for the best loaf in the world.

This is part-two of a series entitled dough has a mind of its own.

Two weeks ago I extolled the merits of what, in the United Kingdom, is being called real bread. It uses 100 percent wholemeal-flour and a sourdough starter; and no added chemicals. Today we look at the ingredients.

I will not again belabour having your own grinder, but do keep it in the back of your mind for the future. The best commercial flour I have found is from a mill nestled in the foothills of the Drakensberg. It is also refined; they will not tell me how much of the bran and germ they remove, but it probably is the best on offer, though there is a four times mark up in price. Store it in an air-tight container in the freezer.

It gets me very irritable that a food-company can take a basically good foodstuff, extract the best parts and then has the gall to sell what's left to us for such an exorbitant markup. 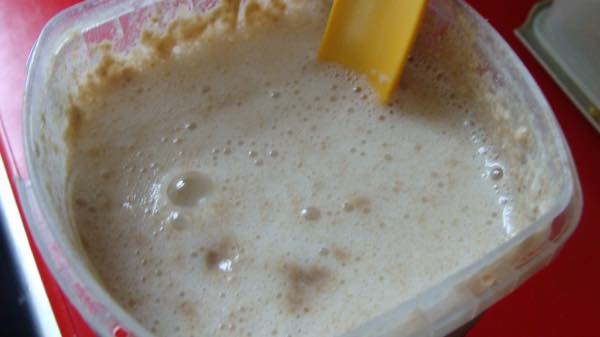 The starter is easy to make yourself, or get it from a friend. See the link at the bottom of this page[1] for more details. It consists of flour, unchlorinated water and raw-honey. It contains the wild bacteria and yeasts that ferment your dough thoroughly, making it edible even for most of those with a serious gluten intolerance[4].

Use the starter as soon as it becomes very active and frothy, if you are baking without yeast. If you leave it too long it becomes acidic and less active.

You will need to experiment; it will require a long fermentation time if you have Crohn’s-disease.

The sourdough also improves the taste of your bread immensely. It is so good that you have no need of jellies and processed meats; I usually eat it just with butter and perhaps half an avocado. The good wife enjoys hers with our raw-honey and cheese.

Purists would sneer at using dried-yeast, but we use half the generally recommended amount for a light and delicious loaf.

I have yet to be convinced that using added yeast detracts from the bread in any way; even if you are gluten-intolerant, in which case a longer fermentation time is needed.

Then you simply add the dried-yeast just before baking the next day.

Then of course, for our easy sourdough bread recipe, you need a teaspoon of honey for the yeast to feed on, salt and water.

Commercial bakers add a protein flour to improve the shelf-life and texture of the loaf. It is a good idea, though I do not personally like soy, so we use a tablespoon of homemade hummus made with chickpeas.

The extra protein and olive-oil lower the glycemic index, so your bread has less of a detrimental effect on your blood-sugar; that is very important.

The acids produced by the bugs, those that give it the great flavour, also slow down what is known in scientific terms as the postprandial glucose-response; they further lower the GI.

However researchers in Israel have added controversy by finding this is not necessarily so. It is dependent on the culture used, the wholeness of the flour and even the bugs in your own colon; the microbiome. For this reason we also make and take kefir regularly.

About six months ago, we had a very experienced professional chef to stay. He makes all his own bread every day from first principles; it was very delicious, though a little heavy with no yeast, and it took quite a lot of time to knead. What I did learn from him was to add some butternut-soup to the dough. That was a big step forward in the baking of a light and tasty sour loaf.

Bakers also add an acidifying chemical; we simply use a teaspoon of freshly-squeezed lemon juice.

I said you could make your own real bread for less than ten-rand; less than half a dollar. That was perhaps a little misleading. If you have to buy flour at supermarket prices, then you can double that figure; it is still cheap for a delicious sourdough loaf which generally retails for at least six times as much, or more.

Sourdough bread made the easy way.

I sell this loaf for R45; bake it yourself. We humans have been hoodwinked into believing it is so much easier and better from the supermarket; it isn't. Learn to distinguish between real and fake bread; cheese and chalk. You'll never go back to the commercial-loaf.

Finally I have a word on the ketogenic diets. I have done Tim Noakes’ course; it was profound and very challenging, and I have a suggestion for those of you who cannot see yourselves totally eschewing all carbohydrate, including even real bread, for the rest of your lives. Adding a large amount of animal-fat and meat to your platter also raises many question marks.

Instead cut out all the refined carbohydrate from your food, which should include commercial bread and adding olive oil and avocados for extra fat; and include more legumes for protein instead of all that red-meat. Then you can enjoy your homemade sourdough loaf; it has a low glycemic index.

Remember it takes less than ten minutes to prepare the dough for the very best real loaf in South Africa; then you would delay adding the yeast for several hours, or even overnight. It takes another five-hours of course in the little oven.

I actually did a demonstration recently. With all the ingredients at my right hand, including milling the wheat it took only four-minutes from start to finish to prepare the dough.

Ingredients for sourdough bread are just wholemeal flour, unchlorinated water and raw honey for the best loaf in the world. We like to add a little dried yeast, some hummus and butternut soup; and, of course, some salt.

Using 100 percent real flour this sourdough bread is rich in a very important family of phytonutrients called lignans; having sufficient of them from your food greatly moves the statistics of bread tumours and cardiovascular disease in your favour.

This page entitled what are lignans simplifies what is really a very complex subject.

That's another reason to gather the ingredients for sourdough bread and bake it yourself; you have control over how much salt goes in. We use half the amount of the commercial loaf[5].

I shudder to think how I needlessly gave up pizza too for thirty-years because it started to give me a serious bellyache. Dough has been prepared the slow way for millennia, until the last fifty-years or so when commercial bakers thought they had got clever. Fast food is intrinsically bad for us most of the time.

This sourdough pizza crust takes me less than half an hour to knead, but you have to start the day before you are going to eat it, giving those bacteria and yeast cells time to pre-digest the ingredients.

Slow-food, made fast, is our motto. 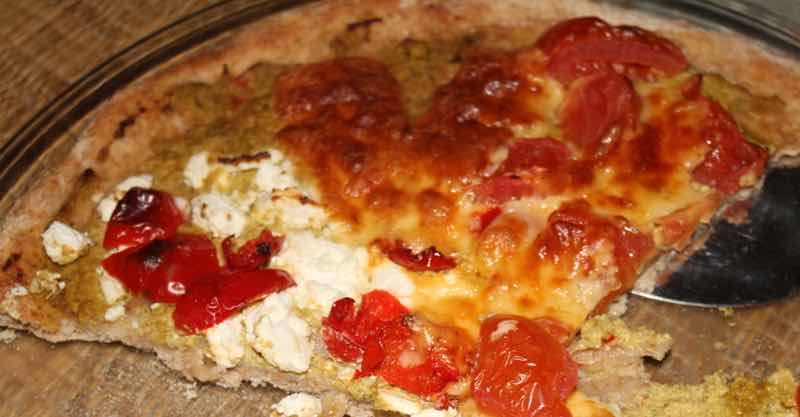 Baking a wholesome loaf using on the best ingredients for sourdough bread, and brewing go together; both use yeast and they are altogether challenging. There are so many variables. This wheat beer recipe is one of the simpler.