Every single family should have one of these pots; it is more useful than the microwave, though we have one of them too, and is the biggest single saver of time in the kitchen.

Let us look first at the benefits. How does it work? 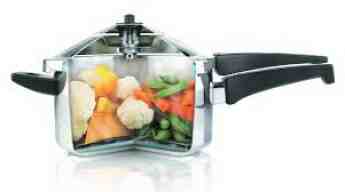 I have yet to see convincing evidence that nutrients sensitive to heat are spoiled by pressure cooking, remembering that the time is reduced by two-thirds. What's more, there is the suggestion that the influence of anti-nutrients like phytates is negated even better by the raised temperature.

This page was last updated by Bernard Preston on 8th October, 2021.

Choice foods are prepared in one-third of the time using solar pressure cooking, reducing any negative effect of heating on the phytochemicals in the veggies that help prevent tumours.

Incidentally I call it solar only because we cook with electricity from the sun; it works just as well on a regular stove.

Only purchase a stainless-steel pressure cooker; aluminium may be a bit cheaper, but there are serious questions about using it with food.

Also aluminium pots are no good on induction cooktop stoves, where you can prepare your food using half the energy and the heat is instantly available unlike a conventional electric hob. In fact it is even faster than gas; we have both, so I know. 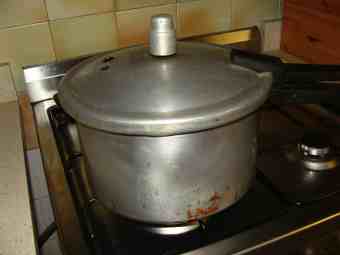 And only purchase one of the modern pressure cookers with a locking lid and a safety-valve; they start around $70.

I wouldn't call that old cooker dangerous, but if you open the lid you will have super-heated steam in your face and your dinner on the ceiling.

Also those old sealing-rings were hopeless; the new ones are far better. 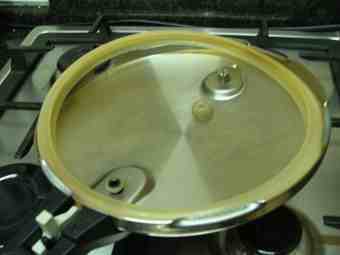 Notice the locking-device on this modern cooker. You cannot open it when it is under pressure.

The valve gives you three settings; steaming, low and high. This T-fal is the best pressure cooker I have ever owned; eight years old and it is used several times a week with no trouble. It has paid for itself in reduced electrical bills many times over.

The handle needs to be tightened now and again; the pressure indicator lets some spurts of air and steam out until it sets. That gave some concerns initially but I now think it is quite normal.

All stainless steel pots like this pressure-cooker work fine on induction stoves. 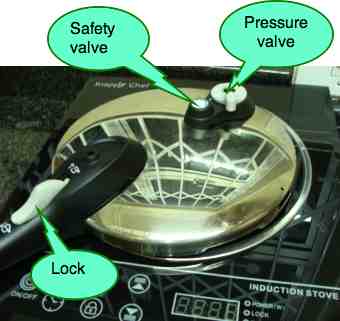 More so than other devices perhaps, your pressure-cooker is potentially dangerous; just as you would be sensible using a pair of scissors, a blender, or the lawnmower, you need to have your wits about you.

Do not forget to set the lock. Do not leave the kitchen until it has come to pressure and you can turn the electrical or gas setting right down to low.

I gave a friend one in thanks for a huge gift, not thinking to explain to her how to use it. She forgot to set the lock, and nearly caused serious damage to herself; luckily most of the pressure was already off.

Far less than hot oil, it's true, but your solar pressure-cooker is still a potentially dangerous appliance.

Solar pressure cooking by using the sun's energy collected by PV-systems costs nothing.

These induction-stoves are magnificent and this is where all cooking really comes into its own league.

To my mind every family should have a modern pressure-cooker if you value your time; and a countertop induction stove like this one if you want to reduce your electricity bill.

The elderly and infirm

Unless one is experienced with using a pressure-cooker I would not purchase this item when one is elderly; it has pitfalls and serious burns certainly can happen.

However to upgrade to a new model is a breeze for anyone familiar with pressure cooking.

Building a solar-generator is another story; it is only for those who are true greenies, but is certainly coming into its own.

Potatoes and carrots take ten-minutes in your solar pressure cooker; most other vegetables less than five. And a roast chicken or beef roll can be cooked in half an hour.

Frankly I would not use it for gem squash or green beans. It is quite heavy metal and takes an extra few minutes to get it up to pressure. Just enjoy them "al dente" in a light weight stainless-steel pot.

Copper-bottom and aluminium pots are not good for cooking on an induction stove; the metals are good conductors of electricity, and no heat is built up in the base.

"Pressure cookers retain so much more flavour and nutrients as nothing evaporates in the cooking process."

If I was to single out the greatest uses for your pressure cooker, I would choose brown rice, legumes and a finger-licking good chicken.

They all take an age to cook. Folk generally don't like brown rice because it takes double the time compared to its white counterfeit.

Legumes like chickpeas take literally hours to cook on a regular stove; and the canned ones are loaded with sugar, salt and preservatives. With all the tumours about I'm very conscious of all the chemicals in our supermarket foods these days.

Just take Parkinson's disease for example; nitrates, a common preservative in bacon target the cells of the substantia nigra, a nucleus in the brain that controls movement. It is a horrible illness with no cure; it is only about prevention.

Keep preserved-meat like bacon, ham and, our favourite, a smoked eisbein, for high and holy days only.

We do a good roast but it takes an hour and a half in the oven using a lot of energy.

Just get yourself a stainless steel, modern pressure-cooker and you can prepare these foods in a third of the time, and reduce your electricity bill.

The solar pressure cooker, energised by the sun is only for the greenies like me. It looks like the Martians landed on our roof in the night.

Bernard Preston loves good food, made fast; that is why he is into solar pressure cooking, and induction-stoves.

He is a semi-retired DC and also a physics major; he questions the widely-accepted belief that the same wattage panels must always be used. That is preferable, but a simple stud diode prevents one PV system from dominating another.

It can be done but my advice is from the start use the bigger panels. Larger are currently available, though I am told the 280W are more efficient. I had not considered these issues when starting with these little PVs 12 years ago.

Using them for our solar pressure-cooker has meant a greatly reduced electricity bill for years and now with the added panels is completely free.

And if you are building a new house, talk to Elon Musk about solar tiles for your roof; so much neater and cheaper too, I believe in the long run.

Solar PV systems collect the sun's energy, turning it into direct current, perfect for storing in batteries; but it then needs to be inverted to produce useful AC.

3kW of these panels, with a 5kW inverter will even allow you to bake and roast on a solar electric oven; provided the sun is shining.

With a very large bank of batteries, one can cook at night too using sunshine power, but that is prohibitively expensive for the average home.

Anyway it is a great way to use your solar pressure-cooker using the sun's energy for free.

It is also very quick for extracting the cartilage from chicken bones for your arthritis.

Using a solar pressure cooker simply means it's powered by the sun for free.