Lime marmalade is one of my favourite preserves. Since we now have our very own tree, I have started to make it myself. A gale caused some lovely yellow windfalls in the last few days, so we picked a basketful, washed them and weighed out two pounds of the fruit.

The hardest part was getting off the peel without taking too much pith; it was not easy. I did this with a potato peeler, but I should think a sharp knife would also do a good job.

Why are Helen and I so excited about this jelly? Just read these notes at lime nutrition. Perhaps most important for folk of our age is that the vitamin C is one of the four that are desperately needed to prevent frailty syndrome. We have no desire to get old before out time. 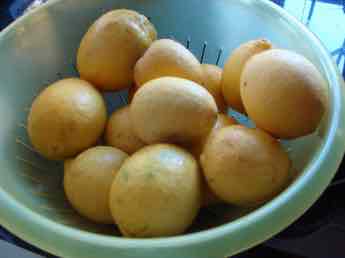 This page was last updated by Bernard Preston on 6th February, 2021.

Lime marmalade is a delicious jelly on your low GI toast. 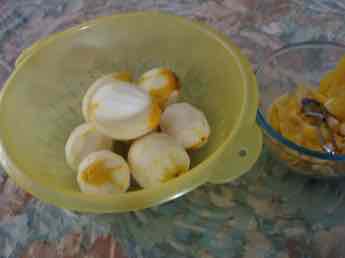 But eventually it was achieved, and I was left with egg-looking fruit in one bowl and peel in the other.

Make sure you always use the pulp too when enjoying citrus as that is where the pectin is found that helps prevent prostate and presumably other metastatic tumours[2]. 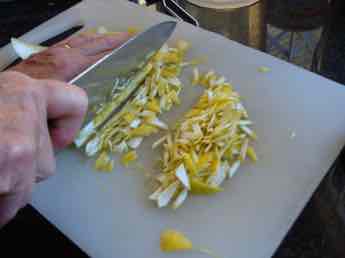 I cut up the peel into very thin, small strips and put them into a muslin bag. It has been used many times for other fruit jellies, so it is discoloured, but completely clean. 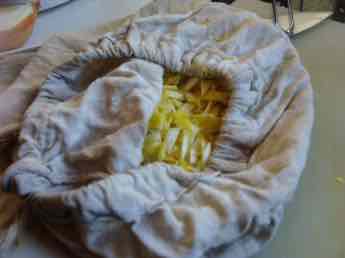 The peeled fruit was then sliced roughly. 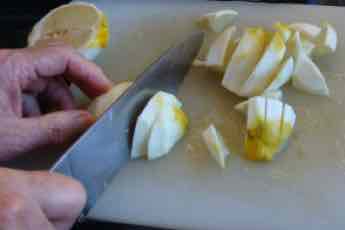 This was very easy compared to slicing up the peel.

As only the peel will end up in the jar, these pieces do not need to be neatly-cut; they will be strained off and discarded.

Both the chopped fruit and the bag of peel will be placed in the cooker together with 1.2 litres of water, and then brought to ten-pounds of pressure; we will leave it to boil for twenty minutes.

The contents should take up no more than one half of the pot's volume. Pressure-cooking softens the citrus much more quickly than just boiling.

A pressure cooker is such a labour and time-saving appliance. Avoid aluminium and watch for a sale price; usually around fifty dollars. The modern ones have a safety device so it is quite impossible for your lime marmalade to end up on the ceiling; provided you remember to set the catch.

Pressure cooking reduces the time by two thirds; it saves you time and electricity, not just with lime marmalade, but all your dishes. [1]

We have used ours three times today; Helen made the lime marmalade and I cooked first an organic butternut soup, and then the dogs' dinner. Is your pet on fast food? Expect the vet bills to start rolling in.

These new devices are super safe. Just because we are crazy about preserving the planet for our grandchildren, we use solar pressure cooking but of course it works just as well on the utility or gas, only it costs you a bit more; actually a lot more; sunshine is free. 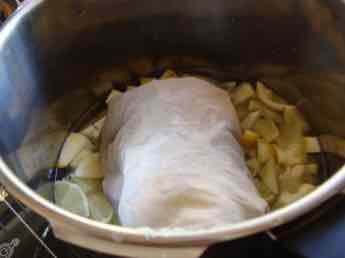 After switching off the heat and waiting for about thirty minutes for the pressure to drop, I carefully removed the bag of peel. 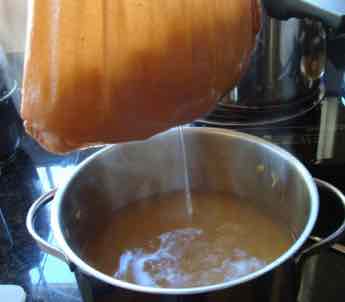 What remained in the cooker was put in another muslin bag and left to drip (in this case tied to the handle of a wheelbarrow outside!) until most of the liquid had drained into another pot. 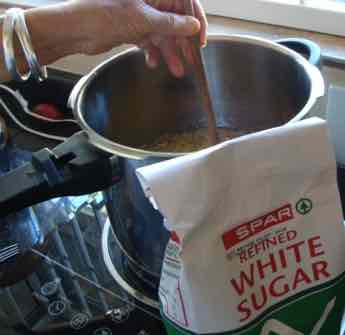 The drained-liquid was poured back into a large pot and three pounds of sugar added to it. It should first be dissolved by stirring, then the heat turned up high for a few minutes till the mixture boils.

We use the pressure-cooker again, but it is not heated with the lid on obviously; you have to stir.

After the heat was turned to zero, the scum was scooped off the surface with a large spoon. Then the washed-peel was added to the pot and the power turned up again. Occasional stirring ensures no burning.

Notice this is all being done on a portable induction-stove; they are such a joy to work with, and not expensive. The provide instant heat and use less than half the electricity.

At this stage, the heat should be kept as high as is safe. Be warned that the mixture should not be left unattended; sugary-mixtures that have boiled over are horrible to clean up. 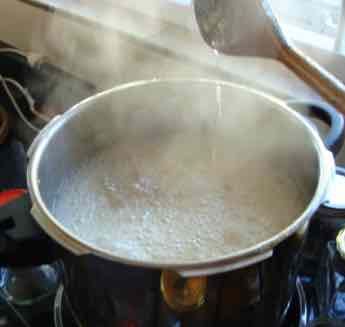 Setting point was reached after about thirty minutes. I tested for the setting point by letting a little of the mixture cool in my wooden spoon, then allowing it to drip.

When setting point is close, the drips near the end will fall cleanly. I also placed a few drops onto a cold plate which was then left in the freezer for a minute.

If the cold drop wrinkles when pushed with a finger, you can be sure the jelly will set.

I'm glad to say that I've done this often enough now that I no longer need to empty jars of supposedly ready but, in reality, very sloppy jelly back into a pot to reheat and get it to really set properly.

All this is being boiled using a revolutionary hob;  induction cooktop stoves use half the electricity and heat at twice the speed; what more do you want?

Just like we'll all be driving electric cars within a very short few years, we will also be cooking by this method. Like all new ideas the price is dropping dramatically once the novelty is over. 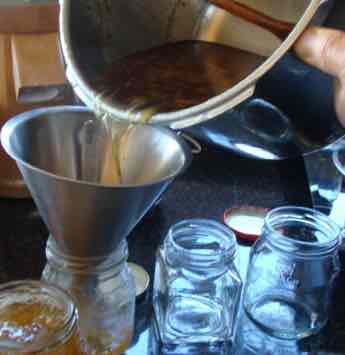 The mixture needs to be left to cool until a thick skin forms. This took about ten minutes. Then the chopped peel can be stirred in so that it is evenly distributed and won't end up rising to the top of the jar. The jars were filled and closed immediately. Our yield was about five and a half pound jars of lime jelly marmalade.

Choice foods give us a realistic chance of a reasonably zestful and happy old age; they affect our longevity, whether we'll get arthritic knees and our mood too.

Lime marmalade on toast made from white bread, lavished in margarine, I would consider junk food.

Make your own low GI bread, and use butter and lime marmalade, yes, butter is back, and you have a very fine snack; not too much if you're seriously overweight.

But low GI bread, butter and limes have many ingredients essential for our wellbeing; just in moderation if you are obese, because of the calories in the snack.

Are you in the dark-green?

Bernard Preston is a foodie nut, semi retired DC with sufficient time now to devote to organic gardening, and his seventh book.

Actually it is Helen who makes the lime marmalade; I just take the photos and enjoy the fruit of her labour. Well, I bake the bread for the toast.

Have you read the other six? They are inexpensive eBooks to be enjoyed on your Kindle or tablet, or even smartphone.

That sugar is a devil, no doubt about it, and every one of us needs to strictly limit it, whether you are obese or not. How much is there in your lime-marmalade?

Five and half jars provides 182 heaped teaspoons of marmalade, enough for one-slice of toast, containing almost exactly 1.8 tsp of sugar each; 7.5g of carbohydrate.

So one slice of toast together with a heaped-teaspoon of our lime marmalade provides about 25g of starch; quite a lot. However, depending on the bread, much of it may be retrograded and difficult for the enzymes in the small-intestine to digest; instead it passes through to the colon.

No person should consume no more than about 150g of carbohydrate per day, the obese less than 50 grams, and an unstable diabetic less than 20.

I am prediabetic myself, so I try to stay under 100g per day; provided I go for a short ten minute walk after a starchy-meal, my blood glucose remains normal. The sugars in the toast and lime marmalade get turned into glycogen instead.

Lime marmalade on white toast is an indulgence, to be kept for high and holy days only. On 100 percent wholemeal low GI bread, if you can find it, with butter, I would call it a nutritious food that needs to be enjoyed in moderation. Keep the glycemic load down.

Everything is about context. How much exercise do you get daily and is resistant starch a big part of your food-planning?

Grasping the meaning of net carbs will be a big step forwards.

Three months ago Rev X consulted me a long and difficult history of lower back pain. He was obese and an insulin-dependent diabetic. We spoke at some length about the role of refined carbohydrate in obesity and the inflammation associated with LBP.

My words struck a chord in him and he took it seriously. At this morning's consultation he had absolutely no lower back pain and a brief examination confirmed he needed no treatment.

With a wry smiled he told me that yesterday he consulted his specialist physician. He too examined him carefully and announced too that there was no further need for insulin injections.

Provided he continues faithfully with his lower back-exercises and remains vigilant about refined carbohydrate it would seem that his future outlook is a lot brighter.

When browsing use right click and "Open Link in New Tab", or you may get a bad gateway signal.