Vitamin E was initially known for its property of preventing sterility. Discovered in the early 1920's by various biochemists in the USA working independently, it was known that feeding rats on a diet of only milk made them infertile.

Adding various other foods made no difference until one researcher discovered that the humble-lettuce restored the rats' fertility.

He named the unknown substance in the lettuce vitamin-E; perhaps surprisingly there is only 0.22 mg per 100 grams.

This page was last updated by Bernard-Preston on 8th August, 2019.

It is a fat-soluble compound, and is found in much larger concentrations in various oils such as that in wheat germ.

Persistent reports suggest strongly that one should get it from whole, unprocessed-foods rather than in capsules; read further for the data.

There are eight different-forms, known as isomers, but we will mention only two; alpha and gamma tocopherol. Not much is known about the others.

Mixed forms give protection against malignancies.

But many supplements contain only the alpha-fraction and this is now known to increase the rate of prostate disease. Why is that?

The vitamin E story is a fascinating cooperation between biochemists, but what comes out of it is that vitamin E is readily oxidised, and in the oxidation process acts as an anti oxidant, giving protection to the cells of the body.

When fats are broken down in cell membranes, free radicals are produced, but the tocopherol protects them against oxidation.

Vital in nerve function, it protects the myelin sheath of the cells. A deficiency causes serious neurological diseases.

It is this antioxidant effect that is thought to give the protection against the muscle wasting[1] associated with frailty syndrome.

It is noteworthy that heart disease was almost unknown, and certainly heart attack very rare, prior to the refining of wheat flour, removing in the process the wheat germ oil and its tocopherols; the lignans too. It is an important factor in the anti-coagulation of blood. It helps to stop clots from forming.

Do you have the signs of an imminent heart attack at your finger tips? It could save a life, even yours.

And know that if you have had one heart attack or stroke, there is another coming within a year unless you make radical life style changes, including consuming foods rich in vitamin E. First and foremost though, have a test to see if you are insulin resistant.

Type "Heart attack" signs and symptoms into the Site Search function above.

And "Lignans" too which are the phytochemicals that compete with circulating oestrogen.

Tingling in arms and hands and legs

Anti-cholesterol drugs too, not uncommonly cause tingling in the limbs.

Vitamin E and the prostate gland

Vitamin E is a must but alpha tocopherol, the commonest form, on its own increases prostate neoplasms.

The SELECT study found that taking neither supplements of vitamin E or selenium had any significant benefit; they have to come from our food to give protection.

But gamma-tocopherol has been shown to prevent tumours, in addition to acting as an anti-inflammatory agent, but for this protection the alpha form has limited value; some of the lesser known vitamin E isomers may be even more effective.

In short, alpha and gamma tocopherol have very different functions:

Clearly both are needed in the nutritious diet; and almost certainly the other six tocopherols too but this is not defined yet.

Prostate neoplasms are the most common terminal malignant disease of men; make sure you are getting gamma vitamin E from your food; and selenium too.

A research project involving a very large group of men showed clearly that gamma tocopherol gave five times protection against prostate neoplasms, but the alpha form and selenium on their own had little or no effect.

The most powerful protection seemed to be when all three were present; gamma and alpha tocopherol, and selenium.

Alpha tocopherol alone has no value in the fight against prostate disease. In fact there are suggestions that it may increase the risk. Why is that?

Alpha and gamma tocopherol are competing for absorption sites in the small intestine. If you are consuming small amounts of the gamma isomer in your diet, and flooding the small intestine with the alpha form from capsules then the latter inhibits the absorption of the protective kind, the one that mops up the free radicals that cause prostate neoplasms.

In short for your prostate gland consume foods rich in alpha-tocopherol and gamma-tocopherol and selenium; meals rich in mushrooms and avocados, for example, plus 100 percent wholemeal bread.

Type "nutritional value of mushrooms" into the Site Search key above; it's about their rich selenium content amongst many others, including ease of cooking and great taste.

And for more information about the "tomato prostate" link which was discovered when research was done into why Italian men had far less of the malignant disease. These subjects are not small beer; for many it's the difference between life and death.

Researchers from Loma Linda University (Journal of Nutrition 2011) state that pecans are particularly rich in the gamma form of vitamin E. They found that LDL cholesterol (the "bad" cholesterol) decreased by up to 30 percent too. That is huge.

Researchers in Poland found that the young leaves of pole beans were particularly rich in gamma-tocopherol, but unfortunately there is no information in this research about the beans and pods.

However Grela et al state that green beans and favas too have significant vitamin E  but there is no mention of the alpha and gamma split.

Growing and cooking green beans is easy; they should be in every garden. 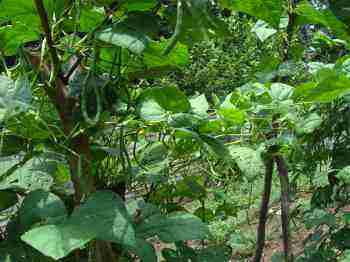 Alpha tocopherol is the most widely distributed, naturally-occurring form in foods. However, as stated above, in certain grains and legumes such as corn and soya beans for example, other forms may predominate.

In short there are persistent reports that vitamin E supplementation, since it usually only contains the alpha form, has little value in protecting our well-being, and may in fact increase the risks.

Clearly it is most beneficial to obtain it from natural sources; whole wheat, corn on the cob, and sunflower seeds, for example. Tofu, almonds, and peanuts are other good provenance; avocados and beans too.

The moral of the story is that sparkling wellness does not come out of a vitamin pill-bottle. It comes from eating foods rich in these substances; from as broad a spectrum as possible.

Whilst baking your own bread if you use refined flour, can in no way be described as nutritious food, made fast, there are few more rewarding things from the kitchen than a homemade, fresh loaf, sprinkled with sunflower, pumpkin and sesame seeds.

To make it truly a wellness food you have alas to go the expense of an "electric flour mill" and a bread machine; type it into the Site Search function key. You will also need just five minutes every day to prepare the dough.

Despite this your divine tasting nutritious bread costs less than half of the nutritionless supermarket loaf; the price of that hardware has been paid back many times over in 25 years.

It takes us less than 5 minutes to measure out the ingredients for our solar bread; a few moments plus five hours.

Or making Johnny bread from your own corn.

Do you get very serious diarrhoea? Try this gluten free bread recipe; personally I would rather go the sourdough route first.

Even better is to come to grips with the meaning of gluten; once you understand a little of the biochemistry and discover why researchers have found that the majority of those suffering from Coeliac Disease can enjoy bread prepared this way. You too can most likely tuck in.

Whilst we make loaves using our twenty-year old Panasonic bread-making machine virtually every day, and would not swap it for anything, they are reported to be the most unused appliances in the kitchen. Do not buy one unless you really plan to use it.

Five minutes each time for a delicious hot, nutritious loaf. It tastes so good you will find you have no need to smother it with ham or peanut butter and jelly.

You know that processed red-meat is public enemy number one of the prostate, right?

Tocotrienols are members of the vitamin E family found in some vegetable oils, the germ of the wheat grain and flaxseed; barley, maize, and some nuts too. They are thought to have even greater antioxidant and anti-inflammatory properties than the alpha and gamma tocopherols.[1]

Those enjoying a broad selection of foods need have no fear of deficiencies. 100 percent whole grains like corn on the cob and real bread are the solid sources where you can get them regularly. The importance of frailty and vitamin E should not be dismissed lightly. This is not small beer.

If you want to reach eighty with all your faculties intact, you really have no option; choice foods and plenty of exercise are essential. It is impossible to rank them, but vitamin E must be right up there; not in pill form which distorts things, but from your nosh.

Choline food sources to prevent birth defects, lutein to keep macular degeneration at bay, and tomatoes to protect against prostate cancer; the list is seemingly endless.

The only solution is a wide range of choice foods.

1. Vitamin E in Sarcopenia: Current Evidences on Its Role in Prevention and Treatment