Diseases of the Immune System

This page on the diseases of the immune system considers the influence of friendly bugs, bacteria and worms in the gut on our overall wellness.

The Twentieth Century has seen an explosion of the so-called autoimmune diseases where the body takes revenge on itself. Whilst conditions like diabetes go back to ancient times, rheumatoid arthritis, heart attack and atherosclerosis are relatively new phenomena on the massive scale seen today; inflammatory bowel, multiple sclerosis and a host of others too. 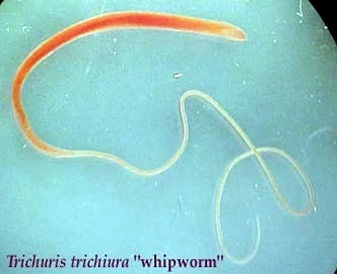 This page was last updated by Bernard Preston on 14th July, 2021.

In the last 100 or so years, communities have made significant strides in cleaning up the water-supply and building proper hygienic treatment plants for raw sewerage. Whilst this has drastically reduced diseases such as cholera and typhoid, it has also had the undesired effect of reducing our exposure to the beneficial bugs; there have been unforeseen consequences.

Diseases of the Immune System

A century and more ago people lived close to the soil, and their gastrointestinal systems were swarming with friendly bacteria, as well as potential pathogens, and worms too.

Today we know that eating active yoghurt and probiotics like kefir, for example, that are filled with living lactobacillus and other friendly microorganisms is good for the gut.

But a dose of worms given deliberately to counter the diseases of the immune-system would make most of us shudder.

Research from Tufts Medical University of Biomedical Sciences in Boston has come up with some startling findings.

Professor Joel Weinstock, gastroenterologist, and his colleagues have found that the helminths in the colon exert a powerful stimulatory effect on the immunity of the host where they dwell; they induce the fight to counter and destroy any invaders.

They sharpen the immune response of our bodies to bugs, good and bad, thus preventing needless tissue-damage.

Deworming the population became a major public wellness project of the early Twentieth century; is it a coincidence that at just that time the prevalence of the diseases of the immune system like MS and rheumatoid arthritis really took off?

And that the corona virus, which is really an abnormal immune response in the lungs called a cytokine storm, has caused such massive destruction to society?

Moreover these autoimmune illnesses, asthma and inflammatory bowel disease too, remain uncommon in the Third-World where worm infestation of the colon is still widespread.

Twenty-nine patients with Crohn's disease that was proving difficult to manage with modern medicines were given whipworm ova for half a year; it is an inflammatory bowel condition.

Within three-months the inflammation in the gut of 76 percent of the group had responded very favourably, and 19 of the 29 were in complete remission.

Remember this was a group of patients who were not responding well to the best-known treatment. In fact, they were on the short list for a colostomy. It is a most embarrassing condition; at no time could they ever be more than 2 minutes from the nearest toilet.

With some it is only 30-seconds; one gets little or no warning that we are about to have a most awkward accident.

Fifty-four people with another bowel disease called ulcerative colitis were split into two groups, one of which was dosed with whipworm ova, and the other given a placebo.

In this double-blind study, the gold standard, neither the patients nor their doctors knew who got the real treatment, and who was given the fake. It is the strongest form of research, removing all forms of bias.

Forty-three percent of the group that were dosed with whipworm, compared with 17% receiving the placebo, responded well to the ova.

It is well known that even a placebo is better than none at all; such is the power of the mind. So effective treatment must do better than the fake.

Find out more about Crohn's disease and helminths at the International Journal of parasitology[1].

In separate research a high carbohydrate, low fat diet has been found to be one of the causes of the inflammatory nerve diseases. Read more at tingling in arms and hands, and legs and feet.

Trying to lose weight on starchy meals, together will very low oils, is dangerous. Nerves are coated with a fatty myelin sheath.

Much has been written about butyrate, a short-chain fatty acid, produced in the colon by the friendly flora. Supplying plenty of prebiotics to these bugs is problematic in the modern refined "industrial" diet. Most of the starches are broken down in the small intestine to glucose, and do not reach those helpful bacteria, viruses and worms that contribute so much to preventing inflammation and the autoimmune diseases.

Prebiotics are the fibrous parts of our food that are not digested in the small intestine, but pass on to the colon supplying nutrients for the normal flora.

Understanding more about resistant starch is important for us all, preventing obesity, diabetes and  autoimmune diseases; like lupus and multiple sclerosis.

Probiotics which are friendly yeasts, helminths and bacteria for the intestines are highly recommended considering the amount of antibiotics we are exposed to, either in medication or in our food. Kefir is one such concoction made from milk and containing over 30 different bugs; it's like a very strong, active yoghurt.

Contributing greatly to generalised inflammation in the body, and diseases of the immune system in general, kefir benefits are a source of friendly bugs that we should all consider; it takes less than five minutes daily of our time.

In fact, having re-established the normal flora, one probably only needs to enjoy kefir now and then; we mostly have it as in this nutritious green smoothie.

"Human beings and all animals, in fact, are teeming with life, and we are really just part of the environment.

When we try to separate ourselves from the environment and exposure to these organisms, we leave ourselves predisposed to diseases of the immune system."
- Prof JV Weinstock

Why, in heaven's name you may be asking, is there a page on worms on a Bernard Preston page? There are two reasons. I have family, friends and patients suffering from diseases of the immune system, conditions which barely existed a century ago. That alone wakens my interest.

But secondly, I love the absurd, the paradoxes, the crazy things of life. I find it profoundly interesting that a medical scientist of high repute is seriously that doctors should be dosing his patients with worms to cure diseases like MS.

At the time of writing this page there was an ortho-manual therapist in the Netherlands getting a hard time from a judge for committing quackery, by claiming that she could help patients with MS by manipulating the necks. I wonder what Judge Renckens would have to say about Prof Weinstock's work?

Similar studies with white mice have shown a reduction in the severity of RA. (Ann. Rheum. Dis. 2008)

Rainwater for the home 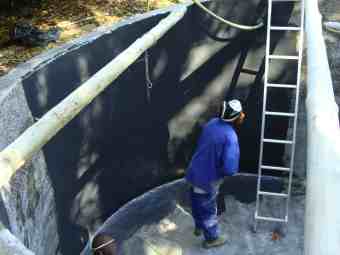 It's probably only in the Third World that one might consider collecting and storing rainwater for the home; one possible advantage is that the drinking water, filtered only of particulate matter but allowing through a few bugs, may also be beneficial to the immune system.

Storing that water in tanks where it gets warm is not a good idea; underground in a covered reservoir where it remains very cold is perfect.

A test for E. Coli was negative, and the soft water is perfect for washing and drinking. Is it good for the immune system? Perhaps and certainly we have none of the diseases of the immune system in our family.

It also has no plastic microparticles and none of the asbestos fibres carried in the ancient municipal pipes that deliver water in our village.

Considering a rainwater harvesting model makes great sense, exposing ourselves to low levels of bacteria. Or should one have a UV-lamp to sterilise it?

Or perhaps it is just a part of building eco friendly homes. Our cities are running out of fresh water; making ourselves resilient in the face of climate-change makes sense.

Two French scientists were at odds with each other over a century ago, and the debate continues to this day.

Louis Pasteur is in many ways the father of today's medical model. Bugs cause disease, and well-being comes from killing them with antibiotics and inoculating the body against them. Creating a sterile environment, disinfecting all surfaces that might have bacteria or viruses, and chlorinating our water supply lie at the heart of this theory.

Antoine Bechamp on the other hand denied that bacteria could invade robust and vigorous animals and cause disease. He claimed that we should instead be looking at the environmental conditions around us, and in fact in our bowels, to find out what is destabilising us and making us prone to illness.

Both models of course are valid, but cynics say there is no money to be made from the latter, so medicine chose rather to espouse Pasteur's understanding of disease.

Hippocrates, the Father of Medicine, promoted both models, using herbs as the precursors of modern drugs, and espousing the view that our food should first and foremost be the source of our wellness.

Copy and paste into Site Search in the menu bar above. 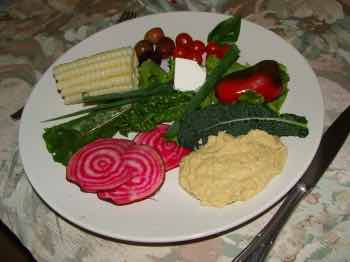