What do tadpoles eat?

What do tadpoles eat or, perhaps more important, who or what loves baby frogs for dinner?

So you want to know how to raise frogs. What do they eat? It all depends on what kind of tadpoles they are.

Then as they grow bigger you can feed them worms and other small insects like flies. 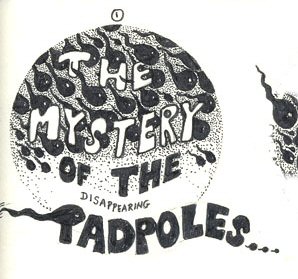 "To many people artists seem

Such laziness, with such great gifts,

One mystery is how they make

the things they make so flawless;

another, what they are doing with

their energy and time."

Frogs belong to a very important family of animals called amphibians. That means they can live in both water, and on land; as some people would like to do.

It is amazing; there are 4,800 species of frogs and they live all over the planet except at the poles. None live in the sea; they are freshwater creatures.

Some live underground, and others in trees.

We have a resident frog who lives in our reservoir; we have never seen him, but he croaks all day long. My grandchildren love to swing and listen to him. He feeds on mosquito larvae.

The reservoir acts like a drum, amplifying his tiny croak into a big, booming sound.

I expect one day he will find a wife, and then we will have baby tadpoles too. I hope they eat all the mosquito larvae.

What do tadpoles eat?

What do tadpoles eat; and what eats tadpoles?

One day a nice lady poured hundreds of fat, friendly tadpoles into a sunny pond. The water was black with them. 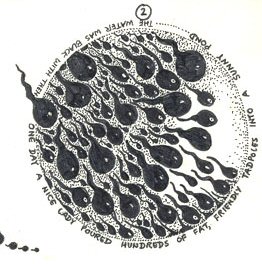 They ate and nibbled, and nibbled and ate, all round the edges of the sunny pond. 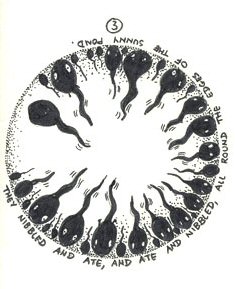 The next day the nice lady went to look at the tadpoles in the sunny pond and found only six very frightened tadpoles. 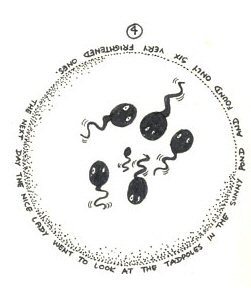 The day after that there were only three tadpoles left. They wriggled in the middle of the sunny pond, and were TERRIFIED!

Enjoying the tadpole story? Lorraine is the nice lady who sketched all the beautiful pictures in Bernard Preston's books.

For more about Frog in my Throat , click here. FROG IN MY THROAT Reviews .. 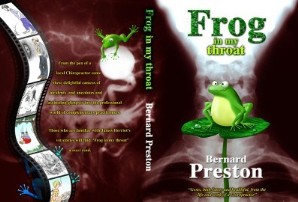 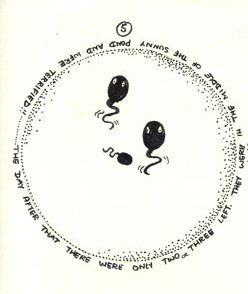 Then there was one. Alone in the sunny pond. The nice lady was sad and bewildered. Where had they gone? 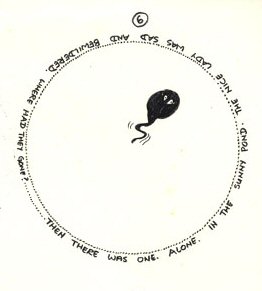 Suddenly, out of the reeds, appeared the monster. The nice lady gasped. So did the tadpole. 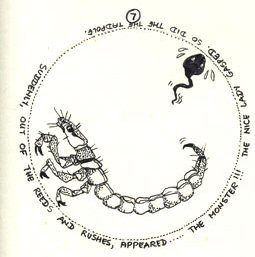 As quick as a flash, the monster hurled himself upon the last remaining tadpole in the sunny pond, and ate it. 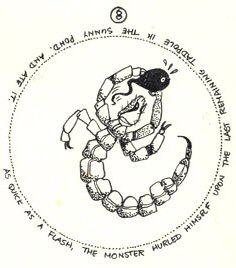 Lorraine Harrison is a prolific artist who lives in Kent, England. What do tadpoles eat is just one example revealing her love of nature, and drawing for children's books. She a genius.

Sad, eh. Tadpoles are just fodder for monsters in the animal kingdom.

Sadly, some humans are also monsters in one way or another. Do you feel like a tadpole, constantly being harassed? Talk to someone about it. Perhaps Dad.

And that is the end of our tadpole story. Thank you, Lorraine Harrison.

Bernard Preston is a retired chiropractor with a love for the things that catch a child's mind. What do tadpoles eat, is just one example. The teddybears' picnic is another.

Yesterday the grandchildren had a lesson on the difference between melting and dissolving; they found watching beeswax melt in a solar extractor fascinating.

Today it will be meaning of a melting point of 63*C. 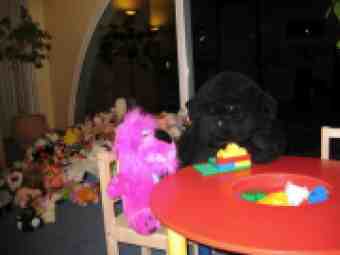 The medium of what do tadpoles eat is of course water; water for kids in the science realm has many different aspects, and getting the grandchildren to drink water rather than sodas has not been that difficult.

Today we will talk about ice melting to water; mm, if fresh water melts into saline, is it dissolving? 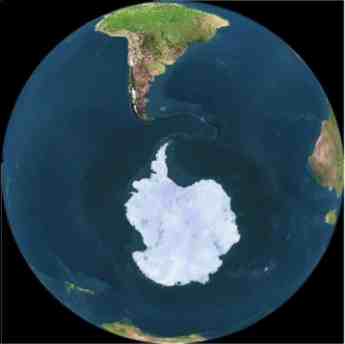 On the subject of substances changing their state, our grandchildren just love our raw honey. Here you can see how liquid honey crystallises, or sets, forming a fine paste. 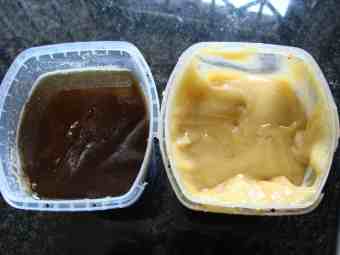 The little people help me in the honeyroom, and already have a fascination for these little insects, but they don't like being stung! Nor do I, but it can't be helped in the life of a beekeeper. Why does honey crystallise is a good subject for the scientist, the child and every lover of good food. Understanding it means we can make our own creamed clover honey at no extra expense.

Lorraine Harrison just adores Bernard Preston's raw honey. You have to pay for art like what do tadpoles eat in one way or another.