False colours, chapter four, begins with Jan Jansen arriving at his mother's home, flying the pirate's flag to say goodbye and take his leave, perhaps for a long time; and to kidnap his son.

Here's a thought; whilst you can read these unedited editions of A Family Affair for free, once you find you're enjoying the plot, why not lash out and spend 130c, yes, that's right, for the fully edited ebook except that Amazon fiddles the price unannounced?

Have you a Kindle, or smartphone?

This page was last updated by Bernard Preston on 18th September, 2019.

Some months later, at one of their many pity parties, Janet and Ouma bemoaned the fact that coincidence also had also given Screwtape the perfect opportunity to put the knife in to the hilt.

When the sordid details did finally all come out in the wash, she cried bitterly that Jan had not been conniving with a mere minion. He was making a tryst with the very devil himself.

‘My son has changed your whole destiny, Janet. I do not know what to say; he and Satan between them.’

‘I am not sure I believe in the Devil, Ouma, but Jan sure as hell changed my life.’

‘Not just your life, Janet. Mine too.

KJ’s life. Santie’s life. All of us. People do not believe it anymore, but when we work with the Devil it changes the affairs of men,' Ouma said.

‘Women and children too.’

It all began several weeks after Janet’s first visit to Ouma’s home. She phoned, wondering if she dared to ask.

They had been several times to Ouma’s home and it was quite clear that KJ loved being with his grandmother; and she with him.

‘Ouma, Santie and I have to go out on an overnight bushveld indaba for the firm. There is some tricky negotiation that we’ve been asked to get involved in and I wondered if you thought you might take Klein-Jan overnight? Actually, if you think you could manage, for two nights?’

‘Why, of course, my dear. When do you want to bring him?’ ‘On Friday evening, and I’ll fetch him on Sunday around noon. Are you sure? I feel quite guilty asking. Will it really be okay?’

‘Absolutely wonderful! You needn’t worry in the slightest. Go off to your conference and KJ and I will have a lot of fun together.’

‘The only thing that worries me, Ouma, is that we will be completely out of contact. No mobile phones are allowed, and there is no telephone. These negotiations are critical so they want the whole party completely cut off from civilisation. Then we hope they will be forced to thrash out a compromise. Do you think you could manage, knowing there is no way you could contact me?’

A family affair is a trilogy by Bernard Preston. False Colours is chapter four.

False colours is pure tragedy; Jan Jansen kidnaps his son and they vanish for over twenty years before Ouma and Janet are reunited with Klein Jan.

"It is unwise to be too sure of one's own wisdom. It is healthy to be reminded that the strongest might weaken and the wisest might err."

Jan Jansen’s plans couldn’t have fallen together more sweetly. Santie and Janet didn’t have the seniority or the experience to be at the indaba but he managed to convince his partners who would be doing the hard negotiating that it would be good experience for the young associates. Afterwards they realised that the events of that weekend started a chain of events rolling that would warp and twist many lives.

No more than an hour after Janet dropped KJ at Ouma’s suburban home, the pirate arrived in false colours to say goodbye to Ouma, and fetch his son. He had carefully booked the flights to Australia to coincide with the conference.

‘Hello Jan! Yes, of course. What a nice surprise. You haven’t been here in an age. Wait a moment while I find the key,’ Ouma said. ‘I’m looking after KJ for a couple of days while Janet goes to some conference,’ she called over her shoulder, hunting in a drawer.

The front door was standing open allowing a cool breeze to waft through the house at the end of the long hot day, locked only with a cyclone gate. KJ came toddling forwards, looking up at the strange man. Neither the small boy, nor the sightless old woman recognized the grim mask that Jan Jansen was wearing. A sighted Ouma would have immediately recognised it for a Jolly Roger. Klein Jan had seen The Fifth a few times, of course, but he was in reality a complete stranger.

‘There’s been a change of plan, Ouma. We’ve just heard that the conference has been cancelled, and Janet asked me to pick Klein Jan up seeing that I was coming out here to say goodbye. You do remember that I am leaving tonight for Australia?’

‘Take KJ? No, you can’t do that Jan! Janet would never agree to it.’

‘But she did Ouma. She’s just asked me to fetch him. So I am here to give you a last hug, and I will see you in a month. Give Janet a call on my cell phone, and she will confirm that I am taking KJ to her home. They live quite near the airport and she didn’t feel like the long drive back here.’

He dialed his own home number and handed Ouma the phone. It rang repeatedly, and meantime his eyes swept around the room. He walked swiftly around collecting the toddler’s toys and clothes, stuffing them back into a travel bag that Janet had brought. He picked up his son with a quick scoop of the arm, ignoring the cry of protest, took his mobile phone from his mother and, after giving her a too quick hug, vanished into the night with not another word.

It did not take Interpol long to ascertain that Jan Jansen and Klein Jan Twycross arrived legitimately in Perth. The Fifth and Sixth were last seen leaving the terminal building and catching an airport bus for an unknown destination. There the trail went quite dead. No one realized that the man and a small boy who left on another flight two hours later, under a quite different guise, a Mr Jensen and his son, KJ were in fact the pirate and his son.

Interpol were quite sure that they would turn up before long when Jansen tried to draw money or use his mobile phone. They were wrong.

Bernard Preston's A Family Affair is his fourth novel. False colours is just one chapter in this tragedy. Bookworms should shop for it at Amazon; only a little over a dollar per copy. 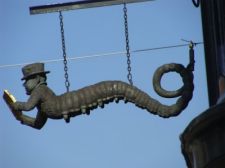