Rainwater harvests include not only manna from heaven, but also a lot of crud. Make sure you have plans in place about how to clean it out.

Notice incidentally the very heavy reinforced concrete-slab that keeps any little people out of the trap; it's the perfect place for a drowning tragedy. 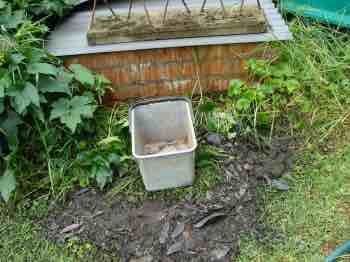 This page was last updated by Bernard Preston on 6th December, 2021.

After you have collected your rainwater from the roof, it will run into some sort of storage-container; most likely a tank, preferably of fibreglass, or perhaps an underground reservoir.

I first got the inspiration for a reservoir whilst enjoying a cycling holiday in Holland. Although today the Netherlands has probably the best reticulated-water in the world, a century ago there was no piping; everyone stored the rain in large underground tanks built in their gardens. It was brought up for use with a hand pump.

The advantage underground is that your rainwater is kept much colder; that means less proliferation of bugs. We drank ours unfiltered or sterilized for many years with no problems; we did have it tested for bacteria though.

In an above-ground tank there are concerns because the water temperature is much higher.

The advantage of fibreglass over a plastic tank is that the former simply lasts forever, and can be repaired should it drop off a stand, or develop a leak. We have one that is 35 years old, and it's as good as the day we bought it. A second, shown below is much newer.

In short, there's potential for a lot of crud.

There is a positive side.

They found that in America 94% of drinking water is contaminated with 9.6 fibres of plastic per litre.

The first step is that your rainwater should really initially run into a sort of trap so that the solids will sink to the bottom. You can see ours at the front of the underground reservoir.

On the right is the pump that will drive the water from the reservoir into our home and garden.

Collecting and saving water like this is an essential part of Bernard Preston's backyard permaculture; working with nature instead of against it.

There are numerous rainwater harvesting models; ours is simple to build and use.

This initial filtration trap need not be deep; ours is about 4 foot, and it's too much. I would recommend about 60 to 80 cm in depth; after all, you have to physically get into it to scoop out the crud.

Bending down a metre or more is hard on the back, and unnecessary for any slight extra benefit.

Circumstances will vary, depending on your locale, but periodically you will need to drain the filtration trap and clean it out. It's not difficult, taking about ten minutes, once emptied.

The first step is to remove the water. Getting a siphon started on the sump isn't difficult if you know the principles involved.

Connect a hose to a tap that is located below the level of the trap and run in a little water, with the end right near the bottom, but not in the crud.

Disconnect the hose from the tap, and the water in the trap will be siphoned out; it won't take very long depending on the height difference. You may want to run it onto your veggies; any crud in there makes good compost.

Once the trap is nearly drained, climb in with a flat sided bucket and physically scoop out the crud. It doesn't take long. Then run some fresh water from the main reservoir back in and do a final wash; there is no point in trying to get it scrupulously clean.

This needs to be repeated at least every couple months; sooner if you start to smell the water, or it takes on a greenish tinge.

In the autumn when there may be leaves falling on your roof, this should really be repeated monthly.

A far more difficult part of the whole exercise, one which needs to be done anyway, is cleaning out your gutters; if they are filled with crud you can be sure your water quality will drop.

I know of no easy way; up the ladder and, using a square edged plastic bottle, scoop up the silt and leaves. It's not pleasant but should be done by every home owner, whether you collect rainwater or not.

A rainwater tank, preferably of fibreglass, is an important part of every greenie's home. It's a lot cheaper than a reservoir, obviously, and simpler to install; but it has no trap to clean out the crud and can only store a small amount of water. 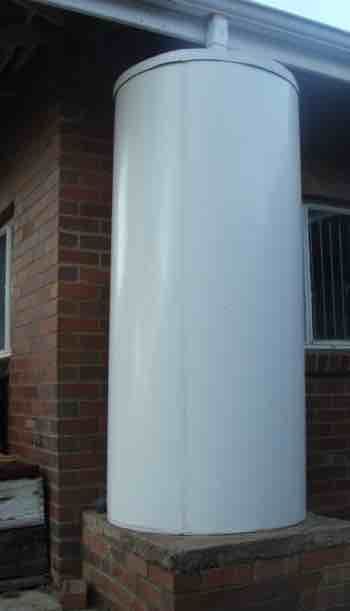 More difficult is what your rainwater harvests and deposits in the bottom of your tank or reservoir.

Below you can see the outlet at the bottom of our fibreglass rainwater tank. It needs to be opened periodically and the crud blasted out by the pressure. 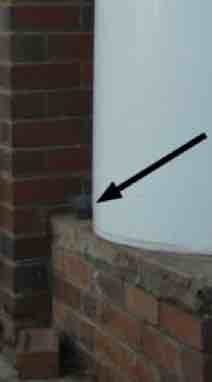 The good wife uses this lovely soft water primarily for the washing machine, but also to wash out the veggies from the garden and to water plants in the area.

Previously, if there was an excess, we'd run it into the main underground reservoir; this is no longer done as the tank stands in full sun, the water temperature is at a higher temperature and there may be some risk of Legionella infection.

Drinking this water is not recommended.

Cleaning out the main reservoir is a much more difficult chore. I do it once a year. The principle is the same. Syphon out the remaining water, preferably just before the rainy season. Lift the roof and put in a ladder. I use a hired submersible pump to drain out the remaining liquid using solar electricity of course.

Thereafter it's hard work on your hands and knees, scooping up the crud into a large drum which the submersible pump then takes to the surface. It takes a few hours.

It's astonishing how much water falls on your roof and how quickly your reservoir will be refilled, once the rains start. 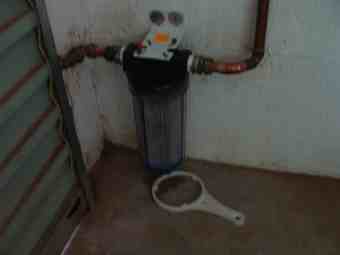 A filtration system to keep particulate matter out of your water is actually optional. They are quite expensive, need to be replaced every three weeks and quite seriously affect the pressure.

We used it for two years, and have had no repercussions from the decision to discontinue it. But it is dependent on keeping both the trap before the rainwater runs into the tank, and the reservoir itself clean.

An underground reservoir has the vital factor of keeping the temperature under control. There is serious risk of bacterial proliferation in warm water. Ours is extremely cold even in midsummer when ambient temperatures rise to over 30oC, but the water stays below 10 degrees.

Backyard permaculture, working with nature rather than against it, is utterly dependent on a ready supply of water; for human use preferably without undesirable rainwater harvests.

Harvesting rainwater is the solution, making you largely independent of the utility and especially any crud they send you. I call it the green journey; in many ways it's more of a spiritual trip into the whys and wherefores of sustaining a habitable planet.

Chlorine remains something of an unknown quantity. It's certainly a very toxic gas; whilst sterilising out E. Coli and other bugs is important, I feel sure it has a still unknown negative influence on our well-being. The asbestos particles in our municipal water are beyond doubt a cause of mesothelioma, an incurable tumour.

Notice the wholeness of backyard permaculture. Collecting the rain, using solar energy to power up the electric pump, with plentiful beautiful soft water for use in the home and garden.

But getting out the unwanted rainwater harvests remains a chore for Bernard Preston. Being a greenie does involve more time, energy and thought; and it does have its irritations. I am unapologetic about them; it's that or a dead planet. Did you know that within a few short years there will be more plastic than fish in the oceans of our world?

Just see the dead whales being washed up on our shores, the bellies filled with plastic. The buck stops right here with backyard permaculture.

Backyard means trying to wean off plastic, which is not simple but then comes the reminder that if it makes men impotent it's certainly doing a lot of other things to our bodies too.

Wet-season drought events may intensify and happen more often. These changes will have implications for long-term crop yield and surface water supply. Adaptation strategies need to account for this.

Bernard Preston is a semi-retired DC somewhat obsessed with leaving his grandchildren a habitable planet; and leading a healthier lifestyle. But it does mean making time to clean out the rainwater harvests.

To that end he collects and stores rainwater and sunshine, keeps bees and chickens and grows a huge variety of organic fruit and vegetables.

You could join Bernard Preston on the green journey he has embarked on; it's been enormously satisfying. Willy-nilly it does include some hassles like cleaning out unwanted rainwater harvests, and scavenging for food for the worm farms; ugh.

But today in our village it's raining and that often means there will be an electrical blackout; even in the dim light there is enough solar energy being harvested from the sky to run fridges and computers.

Yesterday was very summery so there is still plenty of residual hot water from the solar geyser for a short shower.

Going off the grid is an option, but we've chosen not to follow that route for the present; the line charges are low enough not to demand a huge investment in a very large bank of batteries to cover several consecutive days of rain.

We are reassessing that decision after the utility sent an enormous surge down our street, causing much damage; instead we change to prepaid electricity with the mains breaker normally firmly in the off position. Occasionally power from the utility is needed; not often.

The green journey is littered with these contradictions; more rainwater for the reservoir, or less for extra solar energy?

But then the synergy of green living brings other quite unexpected benefits; even the rainwater harvests make wonderful compost.