Getting siphon started on sump

Getting a siphon started on a sump is easy if you understand the principles.

This page was last updated by Dr Bernard Preston on 30th March, 2021.

Where that energy goes is not relevant at this stage.

What's a little more mysterious though is getting water to first flow uphill and then down; enter the principles of the siphon.

In the diagram above, I think it is clear that the atmospheric-pressure is almost identical at the surface of the upper container, as at D in the lower one. 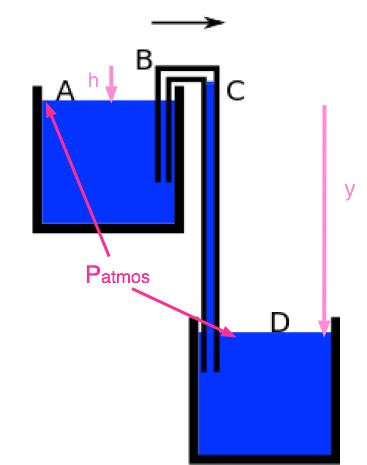 That means that the water naturally wants to gravitate from the higher to the lower container. We can use this principle to easily remove the liquid from a raised-aquarium, for example, to a bucket below.

In this particular instance we are going to use these principles to empty a dirty-sump of its rainwater harvest; leaves and silt too, without having to bucket it out. You do not need a pump requiring energy; nature will do it for you.

We all know that water flows naturally downhill, as in a river or down the plughole from the bathtub; in physics we say to where it has less potential-energy.

The pressure in that pipe is dropping as we move from C to D, meaning that at the surface of the lower-container it is less than that in the liquid above.

Because of the need to equalise the pressure, the water in the tube will be sucked down.

But first it has to raise the sump morass over the hump; the weight of the water in the lower part of the pipe reduces the pressure in the upper-region of the column above A.

However, if there is air in that part of the pipe it simply expands and prevents you from getting the siphon started on your sump.

You can get around this in one of two-ways.

1. Suck on the lower-end of the pipe; however that is likely to get you a mouthful of crud from your sump, or petrol, or whatever you are trying to siphon.

2. Increase the pressure at the lower end of the pipe and drive the air that is trapped in the upper-bend out.

That second-method is a great deal easier very often.

The greater the height difference between h and y, the more efficiently your siphon will work.

This may seem like rocket-science but really it is not; the principles of the syphon have been used for centuries.

Getting siphon started on sump

Getting siphon started on sump is simpler if there is a significant drop.

So, what you do in principle is to get a length of hosepipe and connect it to a tap which is lower than your sump.

Place the other end into your sump. 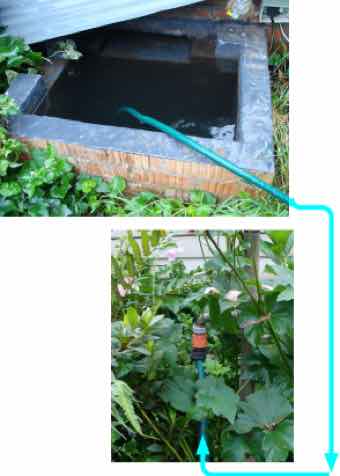 Open the tap where the water is at a higher pressure, either from mains or by turning on the pump. This will force it up the hose until all that offending air is driven out.

Turn off the tap and remove the connector and the dirty-water from your sump will run into your garden. If you are able, direct it into a thirsty part of your veggie garden, or onto a fruit tree; that crud is rich in nutrients.

Rainwater harvests not only manna from heaven for a thirsty land, but also dead-leaves, bird droppings and dust; in short, dirt. The first step is getting siphon started on sump to drain that filthy water.

These harvests from your roof and gutters must periodically be removed from the reservoir and weir or they will taint your drinking water.

One small matter of some importance for the gardener, not directly related to getting a siphon started on your sump.

If you fill a veggie garden tank from your reservoir, say, using a tap lower than the container and a short-length of hose, when you switch off, if there is any leak by the connection it will slowly siphon the water out of the vat. 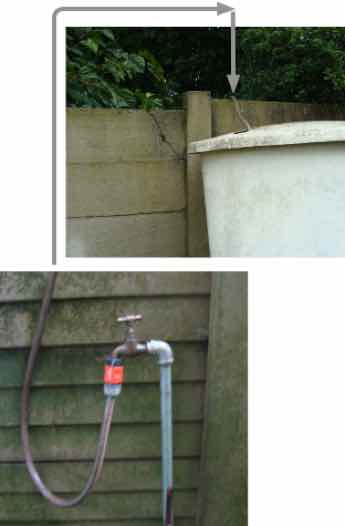 Remove the hose connection, raise it and allow all the water to run into the tank; air will fill the whole length. When you reconnect to the tap it will not siphon out from any reservoir.

Use only self priming pumps incidentally if it is higher than the water-level.

Getting potable drinking water for your home is not as simple as it may seem; do not assume that clear, safe-looking liquid that is flowing from your tap is as good as that bubbling from a pristine spring high in the mountains. It is not; nor may be your own reservoir water. It must be drained annually and getting siphon started on sump is the easiest way if you have sufficient drop.

Equally do not assume that drinking water on sale at the store is pristine either; it's probably not.

Firstly utility-water is chlorinated; whilst that may have revolutionised the safety of water against nasty bugs like typhoid and cholera, the gas is highly toxic. It has a deleterious, known effect on us if there is any organic matter in the pipe.

Secondly, in many place in the world, including where I live, drinking water is still delivered in asbestos pipes. That is certainly highly toxic and causes an incurable malignancy called mesothelioma in the colon.

And thirdly there are any number of chemicals, including residues of medicines, dissolved in that water; some of them may be beneficial and some certainly not. The average person drinks about 5-grams of plastic microparticles per week, for example.

A few more thoughts at our drinking water page.

I am convinced our rainwater is healthier than that from the utility, but we do now, just for safety, boil about five-litres a day for drinking. Due it pressure from skeptics, family and friends we eventually put in a filter and UV steriliser.

Bernard Preston taught high-school science until traveling to Chicago to train as a DC. There he learned about the dreadful drinking water pumped from a sewerage farm called Lake Michigan; the factory effluent were simply ghastly. As a physics major he knows about getting a siphon started on a sump.

Bottled-water was the only solution, and that too was suspect.

Now he harvests the skies for his drinking water; in highly industrialised areas where the air is polluted, some of that would find its way into the rain, but not where he lives.

Storing your rainwater-harvests in a reservoir underground keeps it cold so that bugs do not flourish. It is not pristine, having dust and dirt and bird poo from the roof, but a good deal safer than chlorine and asbestos.

Water stored in an above-ground tank really should not be used for drinking but of course it is in many countries; but flourish at the higher temperature.

Much of that water of course is used in the garden during the dry-periods. There would simply be no broad bean season to keep the tremor in my hand under control without it.

Nor would there be fresh fruit all year-round, unsprayed with toxic chemicals, definitely one of our goals.

So, what's your water innovation?