Pumpkin for diabetes not only lowers raised blood glucose quickly and effectively, but insulin use is significantly reduced. Scientists have found that the active ingredients are two chemicals; one is vitamin B3 and the other trigonelline.

The high fibre content is certainly part of the equation; that slows the absorption of the starch in the small-intestine where sugars are formed by enzyme action.

Pumpkin in fact has a fairly high glycemic index, but because the amount of carbohydrate is so low, it has no detrimental effect on diabetics, provided they don't eat too much. In fact, it is highly beneficial, thanks to the nicotinic-acid (B3) and trigonelline. 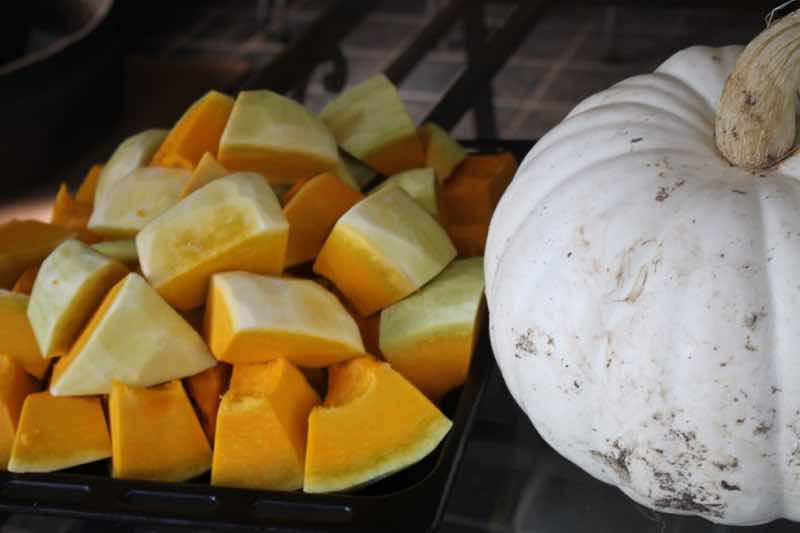 It also forms a solid confirmation that those who eat many highly-coloured foods like pumpkins, greens and berries are much less sickly.

In fact those enjoying 8 coloured foods every day have a 33% lower all-cause of death; that's massive and part of the reason is that insulin resistance is much better controlled.

The pumpkin family, Curcubita Maxima, is actually used in many countries as a traditional remedy for diabetes. We suspect that those enjoying whole, unrefined starches like these actually are less likely to get the disease, but that remains to be proven.

The seeds too are rich in protein, vitamins and the good fats.

Jessica Gavin which show you how to roast pumpkin seeds, very easily done, without having to peel them.

In general roasting increases the GI of starches so it is better to enjoy them baked or boiled.

Scientists reporting in the Advanced Pharmaceutical  Bulletin after studying the effect of pumpkin for diabetes on 20 critically-ill patients who were admitted to ICU found that in the three days prior to being given the extract their blood glucose was on average 215 mg/dl.

After being given a pumpkin extract twice a day, their blood glucose dropped to 178 on average. More over insulin use dropped from 48 IU to 40[1].

Furthermore, scientists reporting in the Journal of Nutritional Research showed that consumption of 65g of pumpkin seeds with high carbohydrate meal reduced the average blood glucose by 35%[2].

Other scientists after discovering that pumpkin maintained a lower blood glucose level than a control group, isolated the active ingredients as vitamin B3 and another compound called trigonelline[3]. 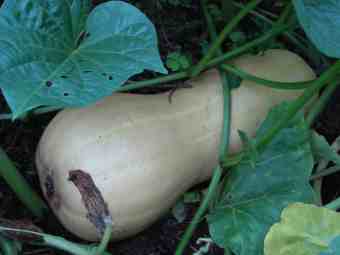 Butternut also belongs to the Cucurbita family and would be our first choice in the pumpkin-family for diabetes management. Turned so easily into a delicious soup it is in fact on the menu at our green home several times a week for more than half the year.

Planted in a compost-heap they grow to a very large size, with no loss of flavour.

Easy butternut soup is simple to make, especially if you have a pressure cooker. Best they are left to lie in the garden until the plant has completely dried off, and have turned a nutty-brown colour.

Growing butternut squash is only for the large-garden. It becomes rampant and will shade out other plants unless controlled. 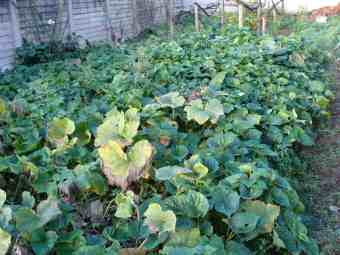 The glycemic load (GL) is really a better way of determining the effect of a carbohydrate on blood sugar. It is an index that combines the GI and amount of starch in a serving.

A carbohydrate with a GL of less than 10 has little effect on blood-glucose. That of half a cup of pumpkin is 3; very low.

However GL is also determined by portion size; eat a lot of pumpkin and it will certainly have a high glycemic load and may effect the blood-glucose; in any event it will contribute a lot of starch to the meal.

Half a cup of pumpkin contains 11-grams of carbohydrate + 3 g sugars = 14. About the same as a slice of bread.

Diabetics should keep their total carbohydrate to less than 50-grams per day, and half of that if they are unstable, or wanting to lose weight.

In short, pumpkin for diabetics is excellent in small portions, but could be detrimental if you ate lot. Portion control is vital; half a cup max. That would also give you a good portion of beta-carotene.

The glycemic-index of butternut at 51 is much lower than that of pumpkin, and the load is the same; GL of 3 in half a cup.

For those with a chemistry background, trigonelline is a pyridine; its structure is a benzene ring with an N replacing one of the carbons.

Nicotinic acid (niacin, or vitamin B3) is also a pyridine derivative.

The scientists found that these two compounds affected enzyme action in the liver positively, keep blood glucose down.

They also lower triglycerides in both the liver and blood stream.

Diabetic retinopathy is a serious disease and the prevalence in many Western countries is very high; 1 in 29 Americans, for example. In one quarter of these people it is catastrophic.

Globally nearly one quarter of diabetics suffer from diabetic retinopathy; in North America, Africa and the Caribbean it affects over one-third of those suffering from the disease[4].

There are different causes; some can be treated fairly successfully but others such as diabetic macular ischemia for which there is no successful or approved care. In one study 42% of those suffering from T2D had this type; progressive loss of vision was inevitable[5].

Strict control of blood glucose appears to be the only solution; pumpkin for diabetes is just one small part of the therapy. Enjoy it regularly, in small portions to reduce the glycemic load.

It is refined carbs and not all starches that are the villain of the peace when it comes to obesity and diabetes.

However unrefined grains are hard to come by. We recommend small amounts of brown rice and corn on the cob; and bread made from 100% flour, if you can find it.

Most pumpkin-pie recipes lose the plot by adding more than a cup of sugar; it is already verboten for diabetics; and it's far too sweet. Try adding just 3 teaspoons of natural honey, and a tablespoon of hummus instead of highly glycemic cornstarch for thickening. Cinnamon and diabetes has an additional role to play in this traditional favourite.

Aquafaba is a topic of interest; the water used to cook legumes is an excellent emulsifier and coagulant, and can be used in place of egg-white and other thickening agents.

Pumpkin for diabetes is grounded in strong science. Enjoy it regularly in small amounts.