Mexican bean beetle larvae can and will destroy your whole crop. They proliferate exponentially.

Perhaps you like me have been scared by all the research coming out linking red meat to malignant tumours, and have made the decision to increase the legumes in your family's diet.

What's not really clear is how much of this scare is related to the hormones and antibiotics that are used on cattle in feedlots; is free-range meat also bad? That is assuming you know a beef farmer who can assure you that his herd is fed organically. 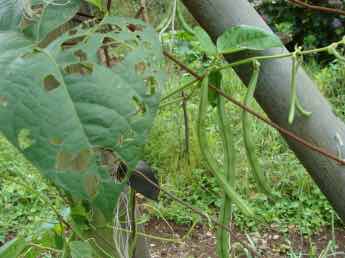 This page was last updated by Bernard Preston on 3rd December, 2021.

Certainly processed meat like ham, many sausages and hotdogs should be kept for high and holy days. It's one of the biggest beefs that I have with the banting diet; all that bacon is certainly not a healthy choice food.

So we planted out seeds by the million, pole and bush; the climbers are definitely better for my money, but unfortunately the Mexican bean beetle larvae also think so. For several years we had no problem, and then I started noticing holes in the leaves.

Finally they started to look like someone had used a shotgun and all that was left was the veins of the leaf. Then they attacked the beans themselves, leaving them covered with black bite marks.

The damage seems to be worst right in midsummer. That means December and January in the very deep south, but of course July and August in the north. They don't seem to touch lima or broad beans.

I wasn't sure whether it was chafer beetles or the Mexican bean that was doing the damage, until I caught one with his hands in the till. I've been watching out for them, but they feed at night and seem to be quite astute; and then vanish during the day.

Then finally I spied what appeared to be a yellowy-orange beetle, rather like a ladybird, but considerably larger squatting on the underside of the leaf right over a large hole where it had eaten away the foliage. What was noteworthy was the black spots on its back; 16 of them I'm told but I was more concerned to squash the beast than count its dots. 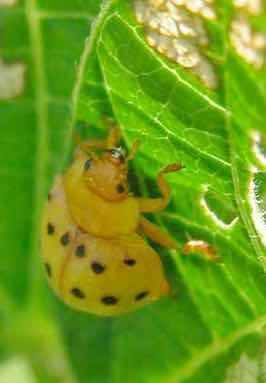 First they chomp the leaves, and then they attack the fruit, ruining the crop. Pick the beans when they are very young. 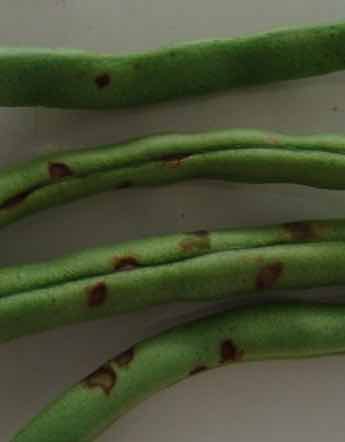 The beetle itself is almost oval in shape. It lays about 50 yellow eggs on the underside of the leaf which hatch in about a week; the plump Mexican bean beetle larvae are about 8mm long with rows of fuzz down running down their backs.

The larvae feed on the leaves for a few weeks before pupating, the adult form of the beetle cycle emerging about a week later.

They live for about two months; there are several cycles of beetle to egg, to Mexican bean larvae and pupating back to the adult stage.

So one beetle laying 50 eggs, would produce another fifty adults laying 2500, each turning again into bugs breeding 50 more.

So, in theory one beetle could produce over a million larvae in one season. Little wonder they are so damaging.

Then they return to the ground where they burrow into the soil for the winter.

For a more detailed page on the bug, you can go to pest problem solver[2].

Oh dear for several seasons we thought the hens had solved the problem, but they're back.

Growing green beans is not difficult but whenever you have a high quality food, you'll find there are numerous predators. The Mexican bean beetle is just one of them. The monkeys in our neighbourhood also love them, but the paintball gun keeps them at bay.

When growing green beans you must take into account that you will almost certainly have an attack by some pest.

I have only three solutions for the Mexican bean beetle larvae; one is a partial idea, and the other two as yet are untested, but I think will work.

After two seasons of being decimated by the Mexican bean beetle and larvae, instead of planting a row of seeds, I planted them in amongst the gem squash.

The large green gem leaves do seem to have significantly confused the beetles; there are far fewer holes and the fruit itself is not being badly attacked. It's looking like a good crop.

Then we grew our pole beans along with limas on a large frame; problem solved. For several years we have had no further problems from the Mexican bean beetle larvae. It simple exemplifies the difficulties that farmers and gardeners too have with growing monocultures; the pests and diseases love it when we plant a large patch of only one kind of vegetable. Then you have to spray with a toxic poison.

There is one little difficulty; it's more difficult to find your pole beans. They are hidden from your eyes too, and not just those of the pests.

The second is white oil which is a mixture of dish-washing liquid and a light vegetable oil like canola. Both sides of the leaves have to be sprayed, and you must avoid the flowers because it keeps the bees away as well; you'll have poor pollination. It works splendidly well for aphids and white fly on the citrus, and I'm hoping will keep the Mexican bean beetle larvae at bay too.

More here about natural pest management, and another link to growing green beans; certainly one of our most rewarding vegetables.

The third is the chicken tractor which, once the beans are finished will be dragged in place for the chooks to scratch for the adult beetles that are lurking in the soil for the winter.

Here is our chicken tractor design. All the bean plants are thrown to the chooks, and they scavenge around the dead leaves and debris under the plants.

On a steel frame, it's mostly electrical conduit and shade-cloth, so easy to move. 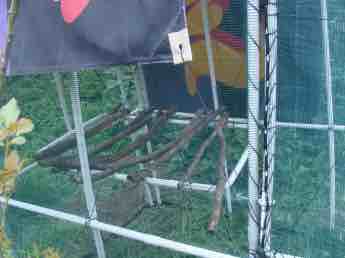 Choice foods certainly means moving gradually away from red meat in general, and processed sausages and the deli entirely. The alternative is too ghastly to contemplate.

We have slowly become flexitarians, enjoy free-range red meat occasionally when we can get it.

Supplementing our red meat with huge amounts of delicious phytochemical foods is part of our solution; fresh corn on the cob, green lettuce and spicy hot peppadews, for example.

And then for protein looking to legumes to replace our red meat; not entirely. Just reducing our reliance on animal food. But those devilish Mexican bean beetle larvae were a big hindrance for several years.

I won't spray in our organic garden, so we look to natural methods to control the bugs. We just love all the delicious choice foods we can grow, straight from garden to the pot before the sugars are changed to starch.

Bernard Preston is a semi-retired DC with a passion for good living; daily he witnesses the ravages of pain and disability of those who stubbornly refuse to follow the rules of the game of life.

One of the most important is to absolutely refuse processed meat except perhaps on high and holy days. That means a shift to legumes; the Mexican bean beetle larvae were a real threat for several years.

To repeat the hens have been a partial solution, but far more effective has been to grow lima and pole beans on the same vegetable garden trellis; actually it's a basic to organic gardening. If one plants all your veggies in a line, the pests simply hop from one to the next.

What's your solution to our Mexican bean beetle larvae conundrum? Please contribute any ideas you may have at contact.