Sweet bitter traces the mellifluous beginnings of the relationship of the first man in Janet's life, with a tragic ending; chapter 21 from A Family Affair by Bernard Preston.

There was one exception. Anton was one of the two young men who invited Janet and Santie to play doubles when they first set foot at the Wanderers, nearly a year previously. The shy one. They had gone on playing doubles once a week despite their dislike of Anton’s friend, Hans. Privately the girls called them Eau de Cologne and Tongue-tied. Hans was a handsome devil and was the first to get the Janet treatment. Despite them having played tennis together regularly, Anton was still painfully awkward with the girls. When Hans described to his friend in graphic terms the stinging slap he got from Janet, it served only to reinforce his fear of the girls. The day came finally when Hans sprained his ankle badly and was put in plaster. Anton asked the club coach to play with them that evening. The older man was a yard slower than the younger players but three yards more experienced. As they started warming up under the lights on a balmy Highveld evening, Janet realized that she and Anton were going to have their work cut out to win. They didn’t.

Over an Appletiser after the game, Anton finally summoned the sort of courage normally required to pop the question: ‘Would you come to a movie and dinner with me this weekend, Janet?’

Janet looked up, smiling. ‘I thought you were never going to ask! Saturday?’

A family affair I must admit is not for every reader; trying to grasp the machinations behind women in love has been a fascinating journey for me; not everyone will agree. If you enjoyed the titillation of Sweet Bitter then read on.

The evening was a surprising success. Anton had again been primed by Hans and he didn’t even try holding her hand, which he wouldn’t have done anyway. Picking her up in his modest old diesel Mercedes, nearly twenty years old, he suggested a small Indian restaurant that made delicious curries that wouldn’t scald the intestine, either coming or going, Anton said. Janet laughed gaily at his jokes. Able to relax, Janet knew that for the first time in many months she was with a man quite without guile. Guessing he would be very conservatively dressed, she wore a simple pair of black tights and a pink cashmere jersey that did her figure justice. The single chain of semi-precious stones around her neck completed a simple, pretty look.

They chatted easily over the pros and cons of Articles. Anton was an articled accounting clerk. They discovered a common love of the outdoor life in general, and hiking in particular. Janet missed the weekends that she had regularly gone hiking in the Drakensberg mountains, either with her school friends from St. Catherine’s, or with her own family. Giggling, she told him how she had once foolishly climbed the Organ Pipes pass by moonlight with three friends. One of the guys got a stone in his boot, and when he bent to loosen his boot, his pack rolled down the mountain. They heard the billycan tied on top clanking all the way down the pass. When they bivouacked for the night, it was bitterly cold, and she had to share her sleeping bag with him. Gaily, she described how there was utterly no room for any hanky panky. It was only the next morning that they realized how dangerous it had been when they saw in broad daylight where the backpack had rolled.

Sweet bitter is a free chapter from A Family Affair by Bernard Preston.

‘Just look at the time! It’s too late for the movie,’ said Anton, looking at his watch.

‘This is much more fun that a movie,’ said Janet. ‘I think it’s time for some ice cream to soothe my throat. If that’s not a hot curry, then please don’t ever introduce me to the real thing!’ The evening was only slightly spoilt by Janet insisting they go Dutch, but it was made for Anton when Janet leaned over and kissed him good night when he dropped her at home. Gently, full on the lips, but breaking it off quickly, and leaping out of the car, leaving a breathless Anton behind.

‘Goodbye,’ she called out, waving vigorously. ‘Next Saturday?’ With that she dashed inside.

‘How did it go?’ Santie was waiting up for her.

‘Nice. Anton’s different from any other guy I’ve ever met. I had to kiss him goodnight!’

‘You kissed him! On your first date!’

‘Well, I knew he wasn’t going to kiss me for at least six months and I felt like being kissed. You and I’ll be on the shelf soon!’Santie laughed awkwardly, trying to hide the glow that she felt everyone must surely be able to see, the moment Janet walked in the room. Surely Janet at least could feel it. How could she not? ‘What nonsense! Fancy that. You think we’re doomed to become two old hags?’

Anton and Janet already knew they had much in common but it was discovering their common love of chess that surprised them both. They took to meeting every Sunday afternoon at Zoo Lake for a relaxing game as they watched the children feeding the ducks.

They began regularly skipping the midweek tennis date to be on their own, either a coffee at a small quiet bar, or a chess club they joined.

It was a difficult time for Santie as she watched her friend fall head over heels in love. An increasingly lonely and morose few months followed, but she did her best to hide her feelings, and tried all the harder to wish Janet happiness.

It was about six months after that first date that Anton surprised Janet with a question, ‘Would you come with me for the long weekend to Golden Gate? It’s one of my favourite places. We can do lots of hiking in the hills, and maybe take a drive through the Malutis. Bring your passport.’

Janet smiled at him, thoughtfully. She knew the drill; young man reserves a room, invites a girl. When they arrive there is only one double bed. Well, it was time to test Anton’s bone fides. ‘Yes, that would be lovely but we still go Dutch, okay?'

She was happy to discover at the end of the long drive after work, late on a Friday night, that Anton has reserved two adjacent rooms at the comfortable Free State lodge.

They managed to leave Johannesburg after lunch, and Janet found the trip relaxing as she sat back in Anton’s car. ‘You’re a good driver. I feel so comfortable traveling with you.’

‘Santie and I often speed. It’s dumb, I know. That’s why I am usually so tense in the car,’ she said, relaxing deeper into the ample worn leather seat. His wasn’t flashy and expensive; just a set of wheels was how he described it.

On the journey Anton told her about his family, and his upbringing on a sugar cane farm in the Lowveld, and about his brother. He had been killed in the war in Angola. Janet in turn told him about Jenny. ‘She’s my twin. I don’t want you to meet her. You might fall in love with her instead.’

‘But she’s married already isn’t she? Are you really that identical?’

‘Peas in a pod. I was only teasing. Yes, she’s married to an apple farmer. They’ve only just started planting their orchards. I take my hat off to her.

She works the whole day with him in the orchards, putting up wire trellis work, and shade cloth and now she's started a correspondence course in agriculture. They want to export to Europe during the spring.’

The lodge blended beautifully into the sandstone cliffs. By day they went for long walks through the golden valleys, climbing the rocky trail that led to the game park and sharing a packed lunch.

They took a drive into Lesotho to see the famous Highlands Water Scheme, and enjoyed a tour over the hydroelectric power station. On the last day, high on a rocky outcrop, with the setting sun slipping between gold laced clouds he found the courage to pop the question, ‘Janet, will you marry me? Please say, yes. I promise to make you very happy.’

They kissed deliciously, properly, for the first time, testing the waters. Janet clutched onto him, holding him tightly. ‘Yes, Anton, yes! I would be honoured to be your wife. But can we wait until I’ve finished articles before announcing it?’

Anton gave a little choking sound. ‘I never believed I would see this day, Janet. Will you really? Do you mean it?’

She put her arms around his neck, embracing him tightly and kissing him fiercely. ‘Does that answer your question, Doubting Thomas?’

It was the first and last time.

This little aside at our nutritional corner just gives another side of Janet and Santie's life as you've just enjoyed (I hope) at Sweet Bitter.

Pesto made very easily in your kitchen adds verve to any green salad; sweet basil is Janet and Santie's favourite herb. If you enjoyed Sweet Bitter, then the whole of Book 1 is free. 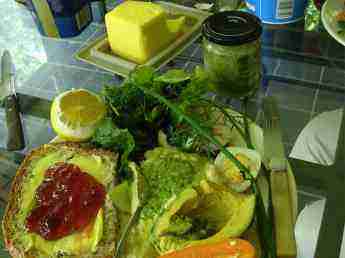 Are you banting? This makes the perfect high fat low carbohydrate meal. Avocado and the olive oil in pesto are rich in the healthy, desirable, monounsaturated fatty acids. The carb in the half slice of low GI bread and jam is softened by the butter, fibre and abundant phytosterols.

The Banting diet without adequate greens to provide the B6 and B9 to prevent homocysteine build up is positively dangerous.

Whether its the hummus or the three different lettuces and fennel, or the spring onion, this makes the happy balance of protein, healthy fats and carbohydrate for those wanting to lose weight safely. We have serious doubts about banting in its traditional form, but this Banting Diet Modified has much to offer for the dieter.

Lunch is an important meal. Ignore it, and you'll eat too much in the evening with the inevitable indigestion heartburn. Here some ideas for the packed lunch, you can make this in four minutes!

Pesto is a welcome addition to any salad. With cheese on bread, with salads, on crackers. Break the sweet tooth habit.

Find the links to those topics highlighted in bold by copying and pasting into the Site Search function in the navigation bar above.

Sweet Bitter is an excerpt from A Family Affair, Bernard Preston's fourth book; it's a trilogy.