Natural honeycomb significantly lowers the bad cholesterol, raises the good one, and best of all gives protection against insulin resistance.

Please note that here we are in the main discussing the wax without the honey. 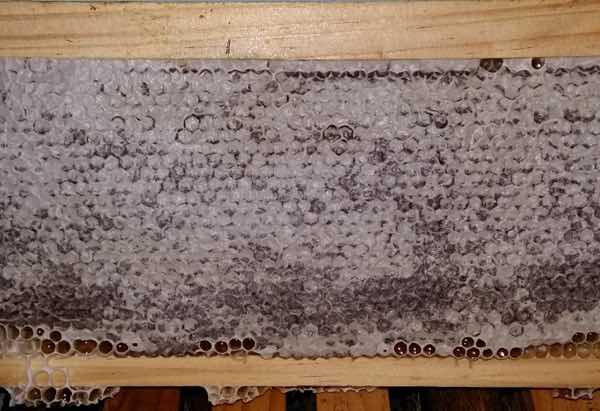 This page was last updated by Bernard Preston on 13th January, 2021.

Natural honeycomb is expensive, but if you look upon it as medicine, then it is very reasonably priced, cheap in fact, and has none of the side effects of statins and anti-inflammatory drugs.

Most important it is the only known helper medication of non-alcoholic fatty liver disease; no drugs are available to treat the condition.

Why is honey in the comb so expensive? Firstly, it takes seven pounds of honey for bees to make just one of wax, so you have to pay for that.

Secondly, and perhaps more important, a beekeeper will harvest honey three or four times in a season. If he sells comb then he will most likely only manage one or two. So you end up paying a lot for the lost opportunity that she or he would have had.

That is the reason that I do not sell honey in the comb; the price would be exorbitant, unless you recognise its value as your 'meds' for some very serious conditions. 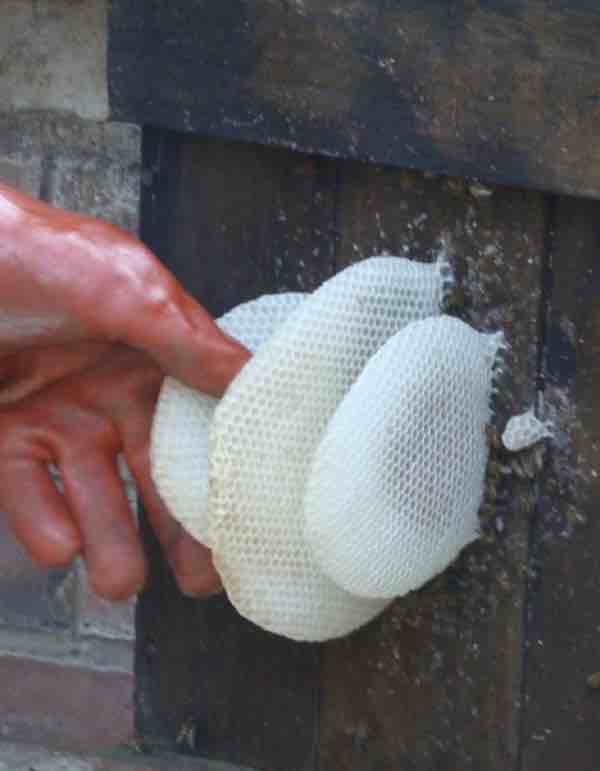 Natural honeycomb has profound health benefits protecting the liver. Non-alcoholic fatty liver disease (NAFLD) is a very serious problem in many first world countries where up to 83% of people may be suffering from it; like diabetes it is a silent condition, suddenly striking and killing its victims.

In Korea for example it is the most common serious sickness affecting over half the population since the arrival of relative affluence; poor food high in refined carbohydrate and a sedentary existence leads to excessive fat deposition in the liver causing fibrosis and cirrhosis.

The obese and diabetics are the prime victims of this life-threatening disease; women are more often affected.

Research published in the Korean Journal of Internal Medicine, where NAFLD is rife, reports that no fully successful pharmacological intervention is available, but that alternative treatments using anti-inflammatory omega 3 fatty acids and beeswax have been shown to exhibit hepatoprotective effects.(1)

100 mg of wax per day for six months was consumed; despite no overall weight loss, the cornerstone of treatment of NAFLD, very significant changes were found in the liver of the treatment group, compared to placebos; insulin resistance, liver enzymes and ultrasound scans all showed improvement.

Researchers speculated that it was due to the antioxidant effect of the beeswax removing free radicals.

Further research published in Digestive Diseases and Sciences found in a pilot study that six months on ketogenic food showed a significant weight loss of 13kg on average and histologic improvement and lessened inflammation.(2)

Beeswax is a mixture of very healthy long-chain fatty acids and alcohols. Honey in a jar is of course technically a processed food, no matter if it is completely raw and unheated, so the comb with the nectar is really the only truly natural form.

Long-chain fatty acids are the natural oils found in the olive, avocado and coconut, for example, and in fish, nuts and meat. Another example is linoleic, an essential compound that the body must ingest as it cannot synthesise it; others are ALA and EPA which are both omega-3.(4)

The Indian Journal of Pharmaceutical Sciences reports that natural beeswax acts as a COX inhibitor, one of the main agents in inflammation of the joints.

They report that it could help in managing inflammatory conditions that impair joint health, without the dangers of conventional medicines that effect the stomach and heart.(3)

Natural honeycomb enhances the balance of fatty acids in the bloodstream, reducing the 'bad' LDLs, and increasing the good HDLs. If you look upon it as a medication to take instead of statins, with their nasty side effects, then it is cheap at the price.

Insulin resistance from the large amounts of refined starches in our food is the number one disease of this century; raised blood glucose has profound effects on every organ of the body. But the wax in your natural honeycomb significantly reduces insulin levels, equivalent to taking metformin, and so has profound benefits for diabetics.

Dr Robert Cywes, an abdominal  surgeon who has done over 1000 liver biopsies confidently says that non-alcoholic fatty liver disease can be reversed in just one week by following this programme.

Thus any honey with your comb must be included, and strictly limited to less than three teaspoons of total sugars each day.

Dr Cywes when treating seriously ill people with fatty liver disease would say the comb by all means, but no honey at all for a period. I would agree.

Natural honeycomb is high in natural sugars and will raise the blood glucose; always take a walk or get generally physically busy after any starchy meal.

The average Western person today is eating over 100 pounds of sugar per year, plus many other refined starches. Honey should be included in these calculations.

The twenty year rule states that after eating 20 odd teaspoons per day (two colas) you are highly likely to become diabetic.

Personally I limit myself to about three teaspoons of honey and no sugar each day.

Personal opinion of a beekeeper

As a beekeeper, I would personally recommend relatively small amounts of natural honeycomb with the raw honey on a daily basis, but only if taken in the context of a high fibre meal and followed by physical activity; then it will not cause a surge in blood glucose.

Raw honey interestingly does not have the expected high glycemic index, being largely fructose, instead with small amounts of pollen that consists of protein and fat.

Nevertheless these are simple sugars and indulging in more than a teaspoon or two of comb and honey per day is not recommended. A short ten-minute walk after the meal would be helpful in suppressing any rise in blood glucose.

In theory it would be possible to take a greater amount of natural comb after the nectar has been extracted leaving just the wax; that too would then be a processed food, something we are trying to avoid.

The treatment group in the fatty liver disease research mentioned above received 100 mg of wax per day; that is very little. Prevention with daily smaller amounts of natural honeycomb would probably be far superior. 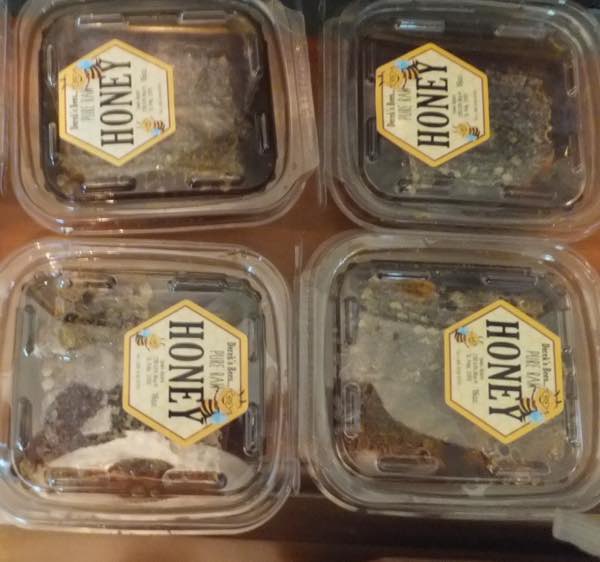 Expect to pay a lot; it really is worth much more than honey in a bottle.

Most beekeepers will refuse to sell honey in the comb; the exception is when by mistake they forget to put a frame back in the hive, and the bees build their own totally natural comb which does not even even have a central sheet of foundation which can be a bit chewy.

It is worth every dollar; not cent.

Propolis is a sort of sealant that bees use to block up cracks and crannies in their hives that are letting too much air or water in. It's fairly pliable and soft initially but gradually hardens to form a dark strong substance.

They also use to glue your natural honeycomb in place.

If it found in every hive and they use it for example to bond the lid of the hive to the top chamber; in levering it off this seal first has to be broken.

Propolis is made of various resins that they garner from trees and plants, beeswax, essential oils and a number of important phytochemicals like kaempferol and quertin that have proven anti-inflammatory properties in the body.

A tincture of propolis has been used since time immemorial for various ailments like scratches and wounds, but it apparently has benefits for many conditions like diabetes, helping to normalise blood glucose and even the neurodegenerative diseases.

That I cannot vouch for, not having read the research, but it is so easy to make. Usually it is done with alcohol, but simpler is to chop or grind it up and add it to a bottle of olive oil; leave for a few weeks, shaking periodically, strain and simply use it on your salad every day. It has a various interesting flavours.

Bees love propolis. If you leave old hive parts out, the bees can be seen reclaiming it for reuse in their boxes.

It acts a powerful attractant when looking to trap new swarms; I add a few chunks to raw beeswax, heat it up in an old pot and drip it all over the catch-box. It is a normal part of natural honeycomb.

Read more about propolis at World of Honeybees.