Anti-inflammatory omega 3 notes persistent reports that something in flax kills arthralgia; most seed oils consumed in the Western diet are high in ω6 which makes muscles and joints angry.

Owing to the consumption of large amounts of seed oils in the Western diet, such as from the sunflower which has an omega 6 to 3 ratio of 200 to 1, arachidonic acid is maintained at high cellular levels; it provides the ingredients for highly pro-inflammatory substances in the body.

However let's acknowledge that there is a vast difference between cold-pressed sunflower oil, for example, and that which has been solvent extracted at very high temperatures; the former is excellent but hard to get.

And some scientists deny that omega-6 fats are inflammatory at all[1]. 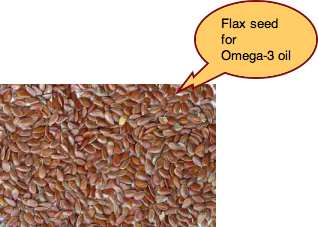 The end result of this high omega 6 diet is oedema and pain; joint and muscle stiffness too. Atherosclerosis, asthma and tumours are fingered as well; and autoimmune-diseases such as lupus.

In short there is a strong body of the scientific community that believes we get more than enough seed oils and we shouldn't be actively trying to take more; in fact that we ought to be reducing those that are highly processed as in that from flax and sunflowers.

Prevention of the conversion of omega-6 arachidonic acid to prostaglandins and cytokines is the aim of the exercise.

But non-steroidal anti inflammatory drugs taken long term have serious side effects. Are there alternatives?

Freshly ground flax seed and fatty fish are the best way to correct this hopelessly out of sync 6 to anti-inflammatory omega 3 ratio.

Omega 6 and the Western diet

Canola oil has a healthy omega 6 to 3 ratio of 2 to 1 but has other issues which are fully discussed on Wikipedia. Notably that this rape seed is fully genetically-modified to reduce the high levels of a known toxin, erucic acid, to 2 percent which is considered to be safe; thought, but not for certain.

Virtually all seed oils, including both canola and sunflower are solvent-extracted and contain traces of xylene; and, because of the high temperature methods used, trans fatty acids.

Since we get plenty of omega-6 in our diets, it is best in general to avoid extra seed oils especially in salad dressings.

Use cold-pressed olive oil rather.

Alpha linolenic acid is found in large amounts (50 to 70 percent) in flaxseed oil.

It is also known as Linseed oil.

Flaxseed is grown in large quantities but most of it is used in animal feed, or for industrial purposes. Is it not odd that anti-inflammatory omega 3 is considered for animals before us? Is it more important that cows and pigs do not get arthritis?

Although Eicosa Pentaenoic Acid is also an "essential" omega-3 fatty acid, ALA can be converted in the body to EPA. However, many nutrients and minerals are required for this reaction to occur readily; they are in short supply from the modern industrial diet.

This conversion is limited in those folk refusing to eat foods rich in many coloured fruits and vegetables.

Less concentrated, but still significant amounts of alpha linolenic-acid are found in pecans and avocados. It's also in many plants in the garden such as purslane, a wonderful herb for our salads.

Fish oil is the main source of EPA; salmon and mackerel which are found in cold waters. Anti-inflammatory omega 3 from flaxseed is the common source of the other form, ALA.

Here's the interesting part. Pro-inflammatory prostaglandins and cytokines  are eicosanoids.

Notice the "eicosa" in EPA and Prostaglandins.

Researchers James et al reporting to the American Society for Clinical Nutrition have shown that EPA acts as a competitive inhibitor of Arachidonic Acid in its conversion to the pro-inflammatory prostaglandins and cytokines.

They report that decreased synthesis (up to 90%) of these pro-inflammatory substances has been observed when fish or flaxseed oil are added to the diet of patients suffering from rheumatoid arthritis.

Another popular source of omega-3 is krill oil. They are tiny shelled sea creatures that make up a large part of the diet of whales and many species of penguins and fish.

About sixty percent of the brain is fat, and fully half is docosahexaenoic acid. In particular, the Optic nerve is considered an extension of the central nervous system and together with the retina has the highest concentration of DHA in the body.

Of interest is that fish like us cannot actually make omega-3 fatty acids. They consume them in their diet, from algae, seaweeds and krill in the main.

Vegetarians who have no desire to eat fish, or swallow these capsules, for their DHA can in fact find seaweed and algae products on the market, rich in omega-3 oils.

General advice is to join the Chinese and eat seaweed regularly. Unfortunately we are ruining our oceans too, so I am not convinced that makes good sense; it's probably contaminated.

Are there any adverse effects from taking large quantities of omega-3? Consumption of more than 3g of EPA and DHA has, according to the FDA, the potential of serious risks including haemorrhagic stroke.

Of importance is that even a generous helping of salmon, say 100g, contains only a total of 2.5g of PUFAs, in the main made up of omega-3.

Plus of course you get the very nutritious fish-protein and the other many unknown compounds found in all whole foods, as compared to pills from a bottle.

Do your best to avoid anti-inflammatory drugs; let your flaxseed and cold water fish be your medicine. 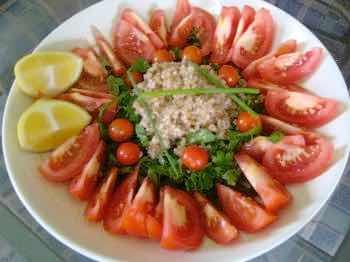 One of the great difficulties is that omega-3 fatty acids become rancid as soon as they are exposed to air. Fish (DHA and EPA), like house guests go off after three days.

Flaxseed oil too is so readily oxidised that it releases large amounts of heat, exothermic, that it is dangerous to leave old rags soaked in this omega-3 oil (ALA) lying around. They literally can ignite spontaneously; rather grind and enjoy your own.

Oleocanthal is a natural phytonutrient found in olives and extra virgin olive oil. By acting as a Cox inhibitor, it too has anti-inflammatory effects but without upsetting the stomach.

Because olive oil has no omega-6 fatty acids, it also does not raise the ω6/3 ratio.

Use olive oil daily for its anti-inflammatory effect and perhaps make delicious and nutritious pate for your snacks; it's so simple.

Some researchers have found that true free range eggs have triple the anti-inflammatory omega 3 of that from a caged bird.

The British call them proper eggs. Truth is, they are very difficult to find. A farmer who allows his birds to wander openly for five minutes can legally call them free-range.

But researchers at an American university found that true free range eggs have even higher levels of omega-3. A solution for the gardener with a large property is the use of one of these chicken tractor designs.

In practice however, we found that it is only your small seedlings, green beans and kale that you really need to protect from the chickens. They have a particular need for high-protein legumes in order to lay the perfect egg; and a phytonutrient called lutein for their eyesight. Otherwise they like us would go blind[2].

Lutein and zeaxanthin are the two carotenes that protect the cones in the eye from damaging high-frequency radiation that is the cause of macular degeneration. Kale, spinach and parsley are the best sources; and free range eggs too, of course.

If you have a large garden, and suffer from generalised inflammation in your body, then "proper" free-range eggs are part of the solution. In the Midlands of KZN you can purchase them from Reko Hilton farmers' market.

Improper eggs come from hens raised in barns and cages; anti-inflammatory omega 3 is essential in their diet as in ours. Since they are usually slaughtered when less than a year old, arthritis never becomes a problem for them.

Purslane plant is another good source of omega-3; the hens will eat it sometimes and we can too. It has a peppery flavour and is a great favourite in some areas of the world.

Most of the research on the benefits of omega 3 for those suffering from heart failure have been done with the two compounds EPA and DHA found in fatty fish; however scientists have now discovered that plant-based sources give a 39% lower risk of death or admission to hospital[3]. That too is massive.

In short all three of the omega-3 fatty acids are vital for our wellness; get them from your food.