Oats milk is so easy to make in your own kitchen and it's cheap too. Should you run out of regular dairy you can whip this up in a very short time, and make it richer with some coconut-cream if you choose.

Let's be honest and acknowledge that the dairy today is not the same as the milk and honey from the Promised Land. In the first instance those would have been goats most likely, and they would have been raised in a more natural, if far tougher, environment.

Antibiotics, hormone injections and a plethora of made-up feeds would not have been their lot; not that these are all necessarily bad.

Plus along with honey and olive oil, dairy milk is one of the three most adulterated-foods in the world.

Oats milk is the favoured alternative by many because it emulsifies readily in hot drinks like coffee. The others tend to separate. It has a naturally sweet and creamy texture unlike the other alternatives to dairy. 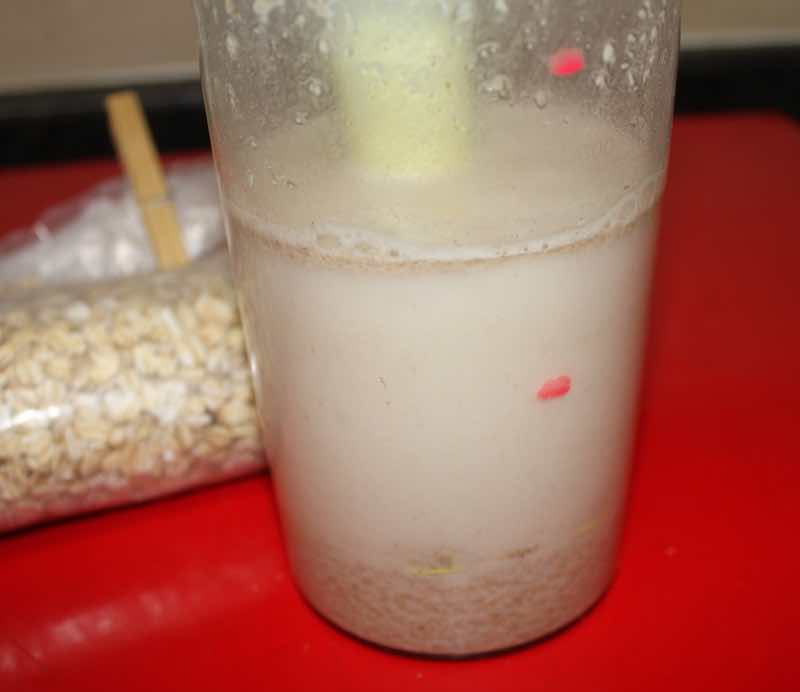 Then there is a pretty convincing lobby that says that dairy milk is for babies and has no place in the adult diet, and the nutrient concentrations are in any case much different to those from Mother's bosom. Human children need far more fat so their brains can grow quickly.

And then there are the dairy-milk allergies that many suffer from.

Enter oats milk into the equation; this will take less than five-minutes of your time, and be ready to drink in fifteen if you are in a rush.

Better still is to soak the oats overnight if you are concerned about anti-nutrients; then discard the first soaking. We will discuss this further lower down on this page.

There are many non-dairy milk options but most of them are albeit potentially less nutritious than from the cow, or just do not taste like the real McCoy; with the exception of that from oats.

An informal group were invited to taste oats, rice and coconut milk; almond and soya too. Can guess which one came out tops?

More you'll find no lobby groups coming out against oats because it is a GM food, or forests are being chopped down to plant it; or some other environmental issue. For example, hundreds of thousands of beehives have to be shipped to California each year to pollinate the almond-orchards.

To produce the same amount of oats and cow's milk, the latter produces more than three-times the greenhouse gases.

And requires ten-times as much water.

Oats milk has rather more body, creaminess and a suggestion of sweetness than the others. It really is an alternative; and it's gluten-free.

In the shops you will find that oats milk costs about four-times as much as dairy. However, if you are a DIY person, then let's consider the figures.

According to my maths, then homemade oats milk costs R2.20 per litre, and there is certainly value left in the fibre. The food industry has a huge mark up of twenty-times. Makes you think, eh, just how lazy and pliable we have become.

In 1 cup (250ml) there are the following nutrients.

Do not take these figures too precisely; they simply point out that oats milk has considerably less protein, about the same amount of fat, but it includes zero cholesterol, and interestingly marginally more calcium.

Of concern is that some commercial brands like Oatly appear to add inorganic calcium salts to their milk; they list the ingredients.

Calcium from food obviously is excellent but as an added inorganic salt actually raises the risk of  cardiovascular disease and dementia[5].

Of interest is that oats unlike most other grains contains a significant amount of fat in the endosperm fraction[4]. 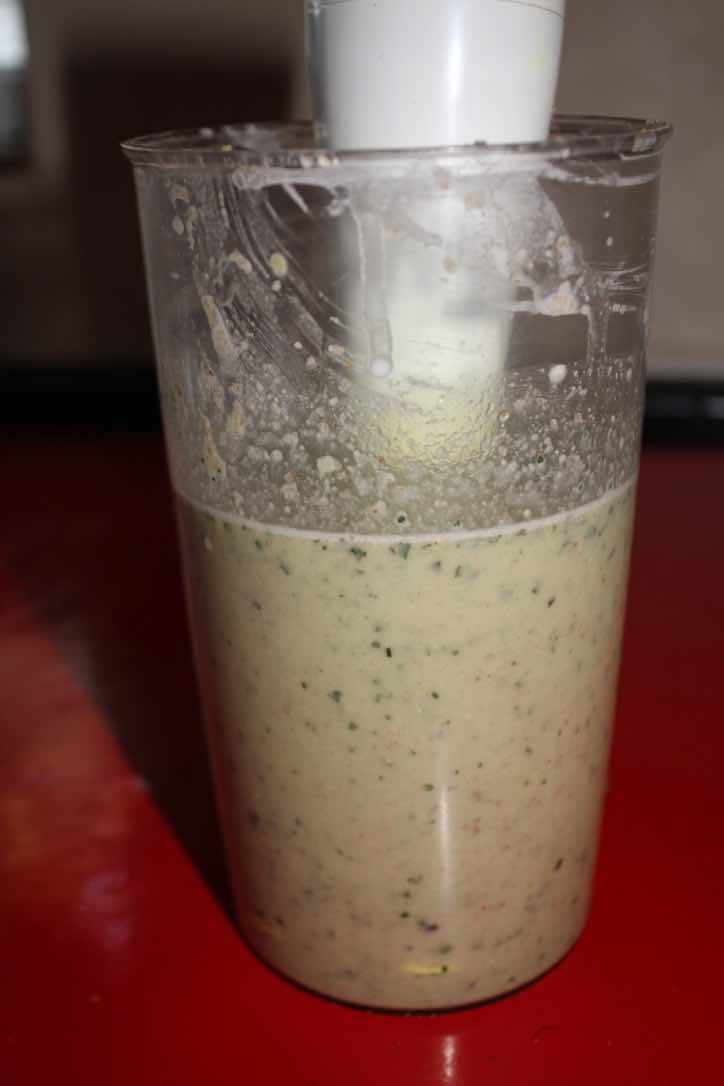 You can rustle up this oats milk smoothie in less than five-minutes. The rich flavour is to die for, and is completely alkalising for stronger bones.

For two people use roughly these quantities.

Use a stick blender.

In half a cup, there would be 20g. That is quite a lot although some of it is fibre; if you are on ketogenic meals leave out the banana. As a rule of thumb, all of us should be enjoying no more than 150g of starch per day, and a lot less if we are obese. Otherwise we run a serious risk of joining the ranks of the diabetics, with the attendant pain in our muscles and joints from the inflammation of raised blood-glucose.

Rolled oats is a wonderfully nutritious whole-grain[1] but by extracting the fibre in making your milk you are reducing it to a refined carb, unless you use that fibrous portion elsewhere; it a wonderful thickener in your stews for example instead of cornstarch.

There is strong research that those enjoying whole grains have less heart disease and a lot of other serious conditions. Your oats milk goes in the face of that. Use that remnant of the fibrous portion elsewhere.

There is a large but I believe misguided following of folk trying to avoid so called anti-nutrients like lectins and phytic acid. Whilst it is true that they inhibit the absorption of certain minerals like iron and calcium, they are in virtually all vital and good foods.

Cutting out anti-nutrients means no whole grains or legumes and a host of others like nuts and seeds. These are the foods that vegetarians live on, and they have stronger bones than the carnivores amongst us. There may be some reduction in mineral absorption, but it is small beer.

Dr Steven Gundry, a truly learned man, makes a very strong case for avoiding these "terrible" anti-nutrients, and then totally ruins it by advising you can enjoy them provided you buy his concoction. Are they good, or are they bad, doctor?

Soaking your oats overnight helps to reduce the influence of these phytates and lectins on mineral absorption.

There is a caveat to oats milk. Like most grains and legumes it contains what is known as a trypsin-inhibitor. This is an enzyme that digests protein in the gut.

Whilst the cooking of your grains will inactivate most but not all of the trypsin-inhibitor, in large quantities, soy or oats milk may cause pancreatitis.

Trypsin is produced by the acinar-cells in the pancreas. The amount synthesised is controlled by a negative feedback mechanism in the intestine.

Since any trypsin-inhibitor in our food reduces the activity of the enzyme in the intestine, the pancreas keeps getting signals to produce more.

There is also trypsin-inhibitor in the pancreas itself to stop the enzyme from attacking and digesting our own protein cells in the organ.

If there is an inappropriate increase in trypsin secretion from the acinar cells in the gland there have been cases of very serious pancreatitis[2].

The implication is not that we should avoid all foods with trypsin-inhibitors, but cooking them is better and not to go overboard with large amounts of extracts such as oats milk. 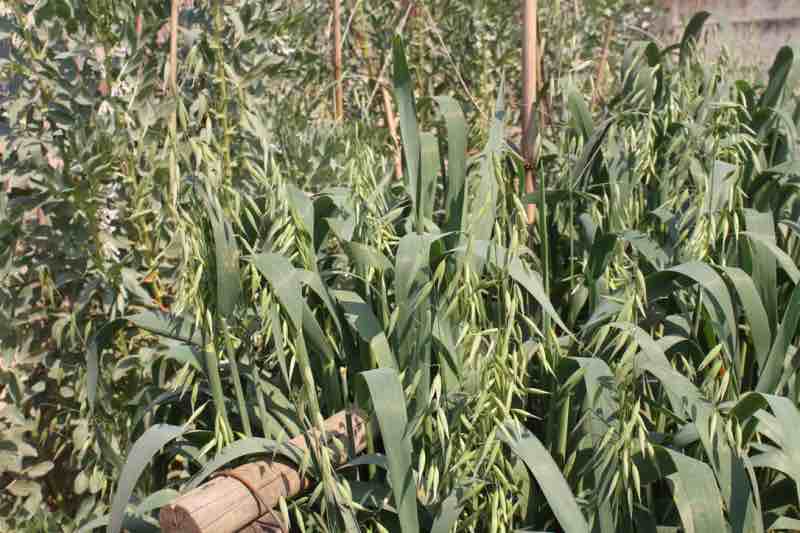 Oats is not difficult to grow; however turning it into a grain, clean and free of the husk is another matter.

Instead we pluck the young husks from the plant before they mature and turn them into "milky oats," rich in vitamins, minerals and important nutrients; but with less lignans. They are the phytochemicals that help prevent malignant breast tumours and cardiovascular disease.

Growing milky oats may be something you would want to play with if you are keen to get off dairy products; it's simple then to process it with your blender.

Oats milk is a reasonable alternative to dairy and it can be blended up in only five-minutes. After filtering off the liquid, use that fibre in your cooking; it is of the highest quality for lowering cholesterol and preventing constipation; and feeding the microbiome.

Contamination of oats milk products is another reason to make your own at home. On July 29, the FDA stated that a huge number were being recalled because of microbial contamination by Cronobacter sakazakii, a bug that causes severe diarrhoea.

These confessions of a waste picker should make us more aware of what we toss into the garbage.