Are favas shell beans may seem like a silly question but reckon on the L-dopa in the shell too.

The pods of many legumes are simply inedible no matter how young and immature you harvest them. No one would try eating the lima this way.

But the pods of many beans and peas are full of important nutrients. There's one other big advantage; not having to shell favas saves a lot of time.

Shelling peas may be easy but it's still tiresome. 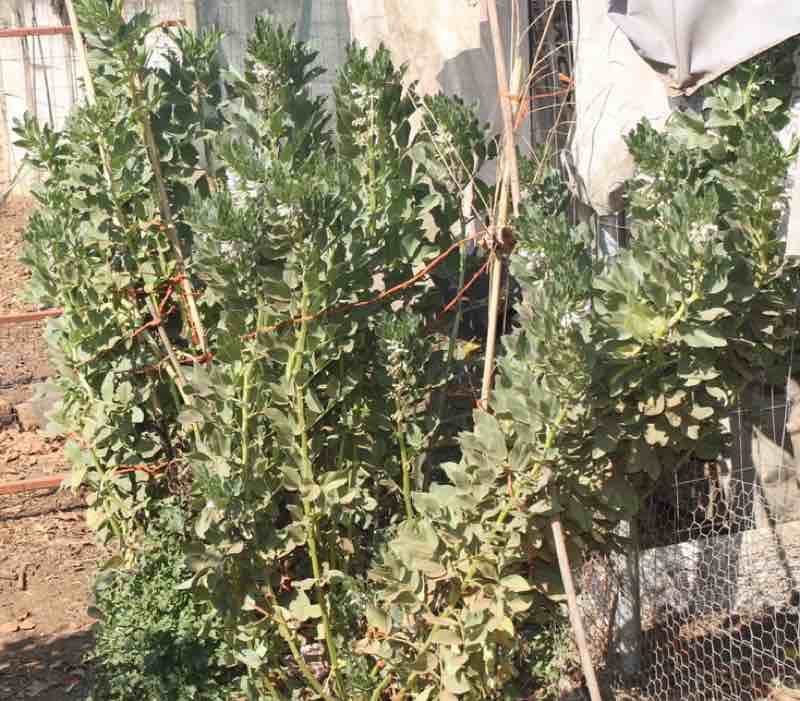 So why would you want to grow fava beans and what's the big deal about their shells and whether you should pod them or not?

Fava beans belong to the legume family. They are rich in vegetable protein and uniquely contain an extremely important phytonutrient called L-dopa; more about that later.

In addition they are an excellent source of fibre. On the so-called industrial diet enjoyed by much of the world, folk are getting less than half the recommended amount; it's been refined out and actually, now that we have become accustomed to it, most of us like it that way.

What we don't like is that a diet low in fibre means an unhappy, constipated tum with all the attendant medical risks; and a microbiome starved of nutrients. That means inflammation of our arteries; painful joints and muscles too. 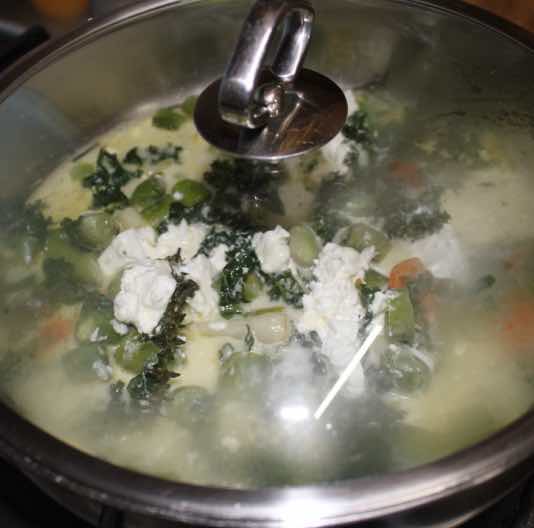 Shell beans and their pods are also a rich source of some B-vitamins and in particular folate[2]. If the elderly are deficient they become frail long before their time and children can never reach their full potential in school.

The longevity diet stresses the importance of shell beans and it's fascinating that quite independently in all five Blue Zones they grow and relish eating favas[3]. 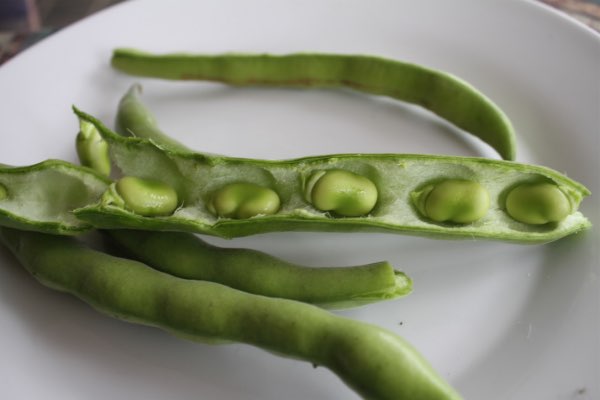 Shell beans are also a very rich source of minerals like magnesium, iron and potassium; that means lower levels of toxic homocysteine, no anemia and reduced blood-pressure. They are good food.

But we haven't yet addressed the question, are favas shell beans?

Should we pod them or not?

Parkinson's disease is caused by the death of specialised cells in a nucleus in the brain called the Substantia Nigra; they produce dopamine. It is a nasty condition that is terminal. Drugs helps for a few years but the benefit quickly declines.

Fava beans are unique in that they are high in a precursor called levodopa; it can cross the blood-brain barrier and be converted into the neurotransmitter. Most sufferers of Parkinson's disease respond far better by getting treatment from their food than the medicine[1].

Are favas shell beans? Yes, they are, but there is even more levodopa in the pod than in the seed. Young, and freshly-harvested they are absolutely delicious but you will very rarely find them in the shops; you have to grow them yourself.

They have to be staked requiring a fair amount of attention, so farmers don't like planting them. They also need large amounts of water.

Cholesterol remains a controversial subject in nutritional circles but there is concensus that raised LDL is associated with cardiovascular disease; so statins are prescribed despite all their nasty side-effects.

Strong research shows that eating three-quarters of a cup of any shell beans every day would lower this dangerous low density cholesterol by a massive 19pc. Most of those on statins would not need them at all if they simply added to that an apple, a green salad and a bowl of rolled oats.

Of equal importance is that the fat we eat barely affects the cholesterol levels in the blood. It's the refined carbs that are the devil; enzymes turn them rapidly to glucose in the gut which then is converted to triglycerides in the liver. They in turn are joined onto an amino acid and then transported as a low-density lipoprotein; bad stuff.

Simply taking out one refined starch, like a slice of commercial bread, and adding a helping of shell beans would probably mean you could get off statins. Do it for two months and then ask your doctor to again test your cholesterol levels.

It's unproven but favas in their shells are likely to be even more beneficial; what I can assure you is that these beauties enjoyed straight from the garden are far sweeter and creamier than starchy dried-beans.

They are also called broad-beans. 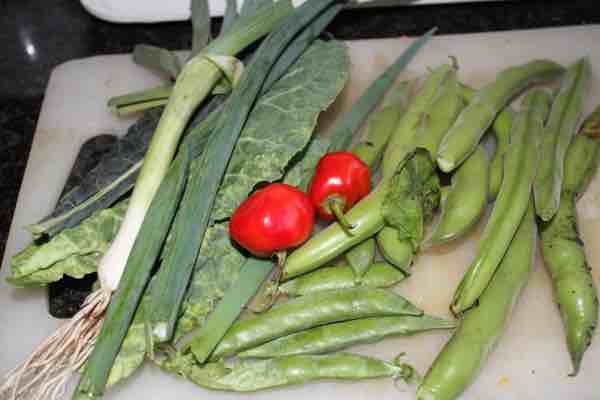 We favour green fava beans, whether shelled or not, but obviously they are not available year-round.

The consensus is that the benefits of beans and peas greatly outweighs the so-called "antinutrients" in legumes; they do reduce the absorption of minerals but their influence can be limited by enjoying them green rather than dried and then shelled.

Are favas shell beans? Yes they are, but rather enjoy them young and green; preferably in their pods.

In short if you can find young, freshly-harvested fava beans preferably don't shuck them.

Once they are mature then freezing broad beans for a whole year's supply of medication for Parkinson's disease is not difficult; blanche, chill and dry them first. 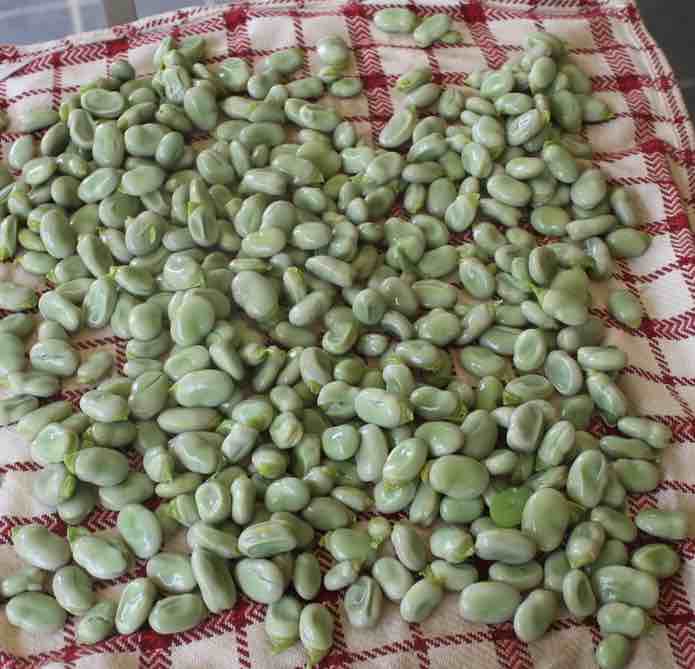 The worst way to prepare fava beans is to double-shell them. First they are shucked from the outer pod and then the skin that surrounds the seed is removed. This is how they are commonly eaten, but then they have no fibre and the glycemic index is very high; they raise your blood glucose. 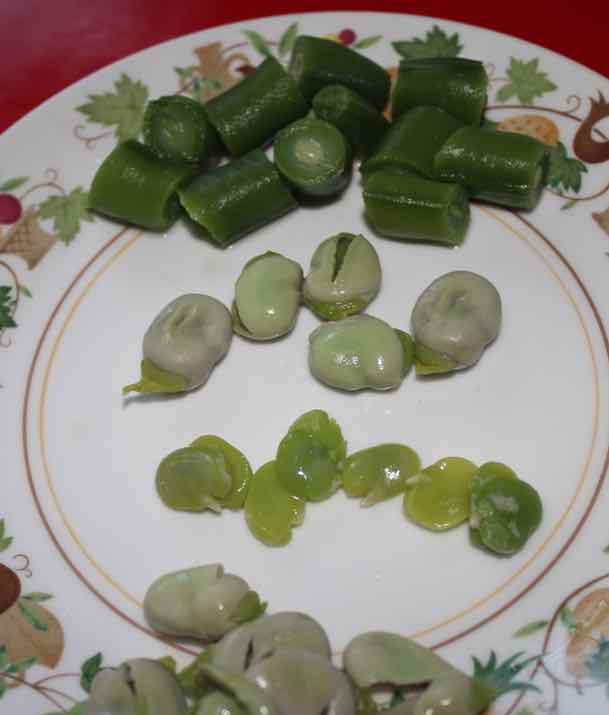 Those above are whole; in their pods. In the centre you can see shelled-beans.

Below are the inner beans with their discarded skins shown at the lower edge of the photo; this is a very detrimental practice.

Are favas shell beans? Either with their pods or after removing the seeds, gardeners love them; bacteria in little nodules on the roots fix nitrogen from the atmosphere. Firstly it is made available to the plant to synthesize amino-acids hence their high protein content; but then also into the soil for the next crop.

Nitrogen fixation bacteria enable gardeners to enrich their soil without having to use inorganic fertilizer.

How to plant fava beans is the next step; so much nicer, young and freshly-harvested from your own garden.

I kid you not; they are hard work but it is so worth the time and effort. Excellent vegetable protein direct from the garden for five months and then enough in the freezer for the rest of the year. Here are a few of my broad bean tips. Add an egg or piece of cheese and you have all the essential amino-acids. 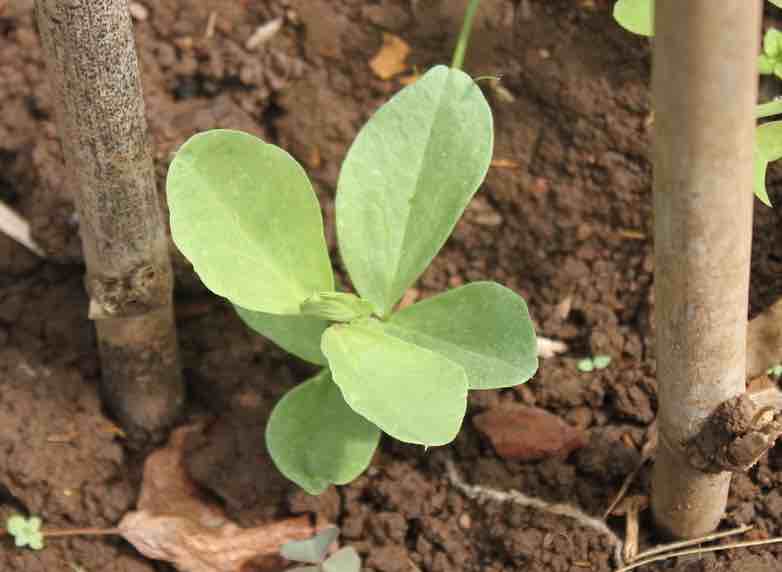 Are favas shell beans is a critical question to answer if we are to get full value from them.