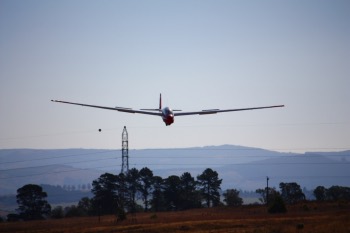 To an even greater degree than the cruel sea, the skies don't tolerate fools and the inept gladly. That's why we have instructors.

There she stood, as bright as a buttercup yellow in the gleaming sun, only this was a broiling hot African sky, just the sort for generating powerful thermals, and terrifying, gut wrenching downdrafts. It was ten long years since I had sat in Golf Echo as the old girl is affectionately known; she’s one of the most prized double seater wooden gliders built more than thirty years ago. She has over 18,000 launches under the belt.

'Would you like to do some aerobatics?' asked Dave, with a sly grin. Definitely not, my heart was soaring alongside a sinking feeling in the pit of my stomach. Did I really want to get back into the sport of cutting edge thrills? 'You’re not likely to find lift,' he said. The last six launches had returned six glum faced pilots back to the ground after about five minutes. The thermals had seemingly moved elsewhere to warmer pastures.

Dave let me do the launch, but I could feel him right there on the controls, following my every move. Like riding a bicycle, would instinct and deep set memory kick in? I wasn’t sure. I was even having difficulty remembering all the vital checks that need to be done before any aircraft has the temerity to leave mother earth and defy gravity.

How can that possibly happen, you may well ask? Well, there are other forces at work than the pull of the earth’s gravity.

Like that of the golden orb overhead, but Mr Golden Sun is so far away, that his gravitational pull has little effect on us mere mortals and our toys. More important are two other forces. The upward thrust created by air passing over a wing; that generates the lift that keeps all aircraft aloft. But what’s unique with gliders, is the lift that is created by rising air.

And for that we can thank the sun.

As my grandmother would chirp, whenever science entered the conversation, hot air rises and hence the monsoons.

Yes, thermals are rising but, close by, cold air is sinking at the same rate. Could we find turbulence in the allotted three minutes we would have after the launch?

One finger up, then two and the all out signal; nearly a mile away, over the hill unseen, the huge Ford V8 burst into song, and I could see the cable slowly being pulled taught, and moments later Golf Echo was hurtling down the runway with Dave and I snugly belted into the aircraft.

My first mistake was to pull back too firmly on the stick, and we went into a steep climb. Too sheer, putting extra strain on the cable, and if there was a break, there was risk of a stall so close to the ground.

Firmly I could feel Dave pressing forward on the stick, checking our ascent. But all went well and duly we dumped the cable, fourteen hundred feet above the ground, and I swiftly turned in the direction of the ridge where I knew there were often thermals breaking off the hot rocks.

Bingo, the variometer cried out we were in lift and, swiftly moving the stick to the left and simultaneously kicking the rudder I tried to stay in the current of rising air. Some of the old instincts came back, others were lost, buried under ten long years of dust and rust; I forgot to trim the glider and she started to rear her beautiful nose, only seconds later to drop it alarmingly. My flight path was so erratic that moments later we were in the heavy sink that abuts a thermal. 'Come on, Bernie,' cried Dave. 'Trim the aircraft and keep the speed at 70.'

Gamely I tried to arrest the bucking bronco, kicking myself for forgetting to set the trim tab. Once done, I knew I had precious few moments to find and centre in the thermal again. After that, we would be too low and must set off for a safe landing, and another glum face. Again, the variometer began to sing out its beautiful song, and the right wing this time flicked up. We were on the edge of a thermal.

Shoving the stick to the right, and kicking the rudder I sought again to find the thermal, instinctively pulling back on the stick just a touch to slow the glider down in the lift. Yes, we’re in. The altimeter first slowed its ominous drop towards 600 feet above ground, held, and then slowly starting inching up again.

Well done, Bernie, you’ve gained a hundred feet. Keep your eye on the horizon; your speed is still far too variable.

Concentrating, I kept a firm look outside Golf Echo for other aircraft, keeping the nose centred on the horizon in the correct attitude, the best measure of one’s speed, desperately keeping the gliding flying smoothly in the turn. Another fifty feet; then one hundred. We were climbing.

It was a good half an hour before I could relax and enjoy the flight. Some old bad habits had crept back in, some good practices had been forgotten and staying in the thermal wasn’t plain sailing, and Dave started carping from the back seat again. His nickname wasn’t Grumpy for nothing. The string attached the canopy was always out to the left; I was using too much rudder.

That’s better, Bernie, look we’re getting close to cloud base. A few hundred feet above us I could see flecks of cumulo forming, marking the top of the thermal. A quick glance at the altimeter indicated we were five thousand feet above the ground. We floated about the sky; Grumpy yawned, I was in a thrill.

Give me the stick, said Dave. My glider, he repeated, taking control. I could feel him pulling back sharply and then, as the aircraft gave a few tell tale shudders, he kicked full right rudder. The wing dropped alarmingly, followed by the nose, shadowed by my stomach; within seconds gravity had reasserted its hold on us and we were spinning wildly out of control towards the centre of the earth. Your glider, called Dave.

This was no time for long lost instincts. Dave was testing me to see if I could safely fly solo again, the glider in a death defying stall. Terrified, the earth rising swiftly up to meet us, spinning alarmingly, old memories slotted instinctively in.

Ease forward on the stick and kick full left rudder. The glider stopped spinning, but still the earth was ominously speeding ever closer towards us, the aircraft diving at high speed.

Slowly I pulled back on the stick, keeping the rudders centralised, and we came out of the dive, still a good three thousand feet above the airfield. I took in a deep breath. Phew, I can do it.

'Not bad,' called Dave. 'When you’re in a spin, memories come back fast, eh.' He was right; everything had been instinctive. Your heart in a thrall, seconds from death, there’s no time to think.

Time was up; we’d had nearly an hour feasting with the gods and it was time to let someone else have a turn in Golf Echo. We were still very high, but I opened full airbrakes and called control to let them know we would be doing a long finals. Putting the nose down to keep up our speed and doing a few turns to lose height, I chose a spot on the runway and did a tolerably good landing, seeing it was ten years. Dave helped get the airbrakes right for the final hold off.

As we climbed out of the glider, Grumpy was white. 'What’s the matter,' I asked. Not bad seeing it’s ten years, but we crossed that power line on finals with no more than a few metres to spare; it’s the lowest I’ve been since instructing here.

I’d started the descent from the heavenlies with three thousand feet to spare, and still nearly managed to kill both of us, and write off old Golf Echo. Planes and power lines don’t mix. I hadn't even seen them.

Attention deficit Bernie has to work very hard to notice details, and the powerlines were no exception. Some would say I shouldn't be flying but, with 550 safe launches under the belt, I'm confident, and trying not to be overly so.

Use the Site Search function in the navigation bar on your left to find the links such as attention deficit Bernie to those topics highlighted in bold.

Gliding is often thought to be a sport only for the very foolish, and those with a lot of money. Not so. True, a new state of the art glider will cost you a small fortune, but all clubs have wooden machines that can be hired for a very reasonable sum; then you can try the widow maker for yourself!

Bernard Preston is a semi retired chiropractor, author and lover of life. That does stand in some contradiction for the Christian. "He who does not forsake his life, take up his cross and follow me can never be a disciple of mine." It's also questionable whether believers should risk life and limb flying the widow maker.

It's a great privilege to serve Christ, and fellow man in this world; walking with Him in each and every facet of life, including the gliderport, is a challenge.

Gliding certainly has its challenges, and Dave was tragically killed some years later in an accident; Golf Echo is not called the widow maker for nothing, though in fact he was in another plane. 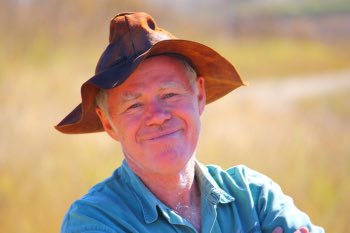 I always make sure I'm wearing a hat at gliding; the African sun is fierce and unforgiving; a melanoma is one of the nastiest of cancer. Prevention is better than a cure.