Med 24 means Santie's financial future is secure, but gazing into the crystal ball draws a blank for her; there are so many unknowns, both in her professional and private life.

What woman could possibly dream that one day her son would marry the daughter of the first Pope in a thousand years to formally take a wife?

A Family Affair by Bernard Preston

Here's a little thought. By all means enjoy these freebies, but they are all unedited; an early draft. If you've got this far with A Family Affair, and are enjoying it, it costs you only 99c to buy the ebook, and enjoy it on your tablet, or on your Iphone for example; or your Kindle if you have one.

Whilst Janet’s professional life gradually moved in the direction of people’s personal and private lives, Santie turned in quite a different direction. She began to develop an interest in drawing up watertight contracts. It started with a Dr Simon Lewinski. In his early fifties, having spent thirty years building up a very successful practice, he now wanted more space. In particular he didn’t want any more two am babies, and he was hunting for a young graduate who would relish the bulk of the weekend work, in order to build up his practice. But he was wary. These young bucks wanted a fast German car in their first year in practice and were quite ready to hijack an old-timer’s hard years of grind.

This page was last updated by Bernard Preston on 7 January, 2019.

‘You are quite entitled to a payback, doctor, for those years when you sweated blood and tears. You mean you delivered babies, worked most weekends and a normal office routine all by yourself?’

‘I never really trusted colleagues, Miss Veenstra. I went in with a group for a year, but they never wanted to work as hard, but they expected the same pay. I busted my gut but all they wanted was to go trout fishing and play golf twice a week. So I didn’t stay.’

‘So you never took many holidays, I suppose?’

‘Not really. Long weekends, you know. My patients are my life.’

‘And what did your wife think of that?’ Santie was interested, but it wasn’t just personal curiosity. Understanding the dynamics and protecting the business from a wayward wife was all part of drawing up a good contract.

‘She got bored and eventually had an affair with a politician who came to town. Between them they quite successfully cleaned me out.’

‘So now you want a contract with one or more young doctors that will give you some space for yourself, and will enable you to recoup some of your losses?’

He nodded. ‘Exactly. A colleague in my position has recently had a breakdown. He just walked out of his practice and closed the doors. After all those years of work building up a solid business, he’s started something quite mundane. A little print shop on a street corner in Cape Town, my wife tells me.’

‘So wisely you’ve decided it’s time to do something before the wheels fall off,’ said Santie, nodding. ‘What you should do, Dr Lewinski, is form a company in which you are the principal shareholder. It needs to have the capacity to bring in new members should you so desire but, in the main, the younger doctors come in as associates, work for a basic salary, and a commission based on performance. I’ll look into it, and get back to you within a month.’

Santie did her homework properly, preparing the ground for what eventually grew into a very large enterprise. Dr Lewinski followed her advice, making a start with two young associates who joined him in the practice.

Some nine months after his first meeting with Santie Dr Lewinski phoned to making an appointment to see Santie. She and Janet had already left J,T and H so she went herself to his rooms.

‘Simon, I have to be careful. You realise I have left J,T&H. They hold your file.’ They were on first name terms.

‘Yes, I phoned there first, and they told me you had left. What must I do?’

‘Give them a call, and ask them to post your file to you. And then, if you don’t mind, just to protect myself, I will ask you to sign a document stating that you initiated this consultation today.’

‘Santie, of course. Now, this little enterprise that you helped me set up has been more successful than I could ever have dreamed. We’re now up to five in the practice, and it’s running very smoothly.’ He stopped, obviously wondering how to go on. ‘I’ve had an offer to buy me out lock, stock and barrel. I thought it prudent to first ask you what do you think.’

‘May I see the offer?’ Whilst the older man sat quietly watching her, Santie perused it for some ten minutes.

‘Are you ready to retire? Do you want out?’ Santie asked.

‘Not really. But they are offering me a huge pile of money, and I’m quite tempted. I would go on as an employee.’

‘That’s because you have built something quite substantial. They think that buying you and your reputation would be a good investment.’

He nodded. ‘Do you have any other options in mind?’

‘Well, how about really growing this business yourself now. Move into much larger premises, and perhaps even build something. Offer a twenty four hour facility where people can get crisis care in the middle of the night or the weekend, bring in some dentists and a pharmacist, a couple of physiotherapists and even a chiropractor. It’s all about turnover while keeping your overheads down.’

‘Yes, but that would result in a huge increase in overheads.’

‘Yes, it would, but not per operating doctor. For example you could have, say, ten consulting rooms with twenty five doctors. Nobody has his own office. As you move out to the golf course on Thursday afternoon, your colleague moves in to take over the next shift.’

‘Where on earth would I find twenty five doctors?’

‘Don’t you have some colleagues in the same position as you? Bring one or two of them in as directors, offer the others shares in the business. Hire a business manager.’ Santie was enjoying herself, letting her imagination fly.

He sat and thought about it. ‘Give me a week to think about it, Santie. You may just have something. I have to decide if I want to do it.’

They met a week later.

‘Santie, could you put forward a whole business plan for me, new investment costs, operating costs, returns etc? And, would you consider coming on board as one of the directors?’

Neither of them realized it but Santie’s financial future had just been secured. Not for one moment did she dream that one day she would be looking to pay school fees at one of South Africa’s top private schools and, for her, it would be no more of a financial consideration than going out to buy a loaf of bread. Her plan included inviting three other top practices to join Med 24.

In a day long consultation with three potential shareholders, she described the mutually rewarding situation. All three accepted. The company documents, and the business plan that she drew up were rock solid and made both her and Dr Lewinski rich. A clinic with twenty five doctors and three dentists working out of twelve consulting rooms and a small operating theatre was an instant success.

Her next projects were a moderately large mining company working mainly in palladium and a new emerging black political party that in fact never made it anywhere but brought her name into prominence through some solid new ideas. Human rights, particularly those of women, became a strident passion in her life and there was plenty of scope in the new South Africa for a new vibrant and colourful personality in the field. Important people started to notice.

Chiropractic has long sat, uneasily for some, in the so-called CAM camp; complementary and alternative Medicine. There has been struggle of identity within the profession. Do we want to be "complementary" to medicine? Alternative? Or even a subspecialty (like dentistry) within medicine. Santie is faced by these questions at Med 24 when a chiropractor wants to join.

Whilst the issue has by no means been settled (either from within medicine, where we chiropractors are still not entirely welcome, or from within chiropractic, where the feeling is that we will lose our identity), the trend has been towards ultimately full inclusion within the mainline health community. I for one welcome this. Why, because the niggling conflict between chiropractor and medical doctor on the street hurts only the patient. The sooner we can work together for the benefit of you the patient the better.

Patients are the ones who will benefit from a new alignment. A recent example is the recent Winter Olympic Games. The Vancouver Oraganizing Committee with backing from the OIC Medical Commission invited 24 chiropractors onto the host medical teams. They worked within the sports medicine polyclinics, serving all athletes.

An important step has been to firmly grasp the definition of professionalism and a professional code of ethics, no easy issue for either medicine or chiropractic, but weeding out the "second hand car salesman attitude" has been vital.

Santie finds herself in Med 24 firmly in the medical corner, but facing these issues for the first time as an administrator.

Bernard Preston's A Family Affair is not really into these chiropractic questions though. 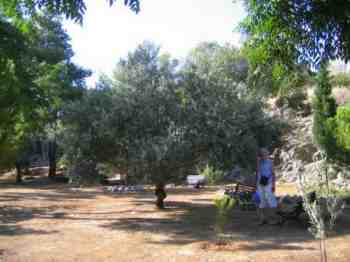 Wherever you find yourself in the Mediterranean lands, you can't but help noticing the revered olive tree. It's no coincidence that the the so-called Mediterranean diet, based on the high Mono Unsaturated Fatty Acids (MUFA) in olive oil, is one of the most healthy in the world. That's She who must be Obeyed not Santie on a jaunt from Med 24 in the shade of that olive tree, by the way.

Here you see the inspiration behind the excellent health in the Bernard Preston family, the good wife Helen, standing under a beautiful olive tree near the town of Naplion, once the capital of ancient Greece.

This Tapenade is so easy to make, so delic and healthy. You probably need to go out and buy some capers. No capers? Easy, just make Olive Pate.

Santie and Janet make olive pate once, but A Family Affair has nothing to do with Greece, ancient or otherwise; it does move to Italy in the next volume. 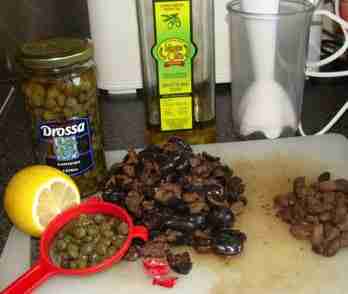 It's virtually impossible for the heterosexual world to understand lesbianism; but it is possible to accept that some women prefer the company of another woman to a man. Mature men like Dr Lewinski from Med 24 don't try to challenge that, or feel they have something to prove.

In any case, "normal" heterosexual relationships are in such tatters, who are we to cast the first stone?