Jan Jansen is preparing to kidnap his only child from the woman he raped.

Chapter One from A Family Affair by Bernard Preston sets the scene for this book.

This page was last updated by Bernard Preston on 27 December, 2018.

There's a very happy man walking down a Johannesburg street, a family man, he chuckles to himself, reaching for the third time into the inside pocket of his exquisitely tailored grey linen suit, just to check again that the passports are indeed there. He has just left the Department of the Interior where he concluded a most satisfactory transaction with a shady official.

The official is wise, he reflects darkly, if you can call a corrupt man that, suggesting that, at the precise moment he passed the two CCTV cameras, he was to blow his nose. The wrap around dark glasses and the Swiss hat would complete the disguise. I can’t think why I was so anxious about this little deal. It was so easy. To think that I could buy two passports for a mere three thousand Rand. Bent bureaucrats are the scum of the world.

At his offices, the renowned Jansen, Thomas and Hansen, the man would normally wear a neatly ironed white shirt and a conservative tie, but on occasions like this he favours a black cotton T-shirt under his suit. He scowls, sensing the sweaty armpit, as he replaces the passports, knowing that it has nothing to do with the weather. It’s a cool Johannesburg autumn day. The man laughs derisively as he passes a ruling party poster for the upcoming elections hanging crookedly from a lamppost. It promises clean and transparent government. Later, scanning the passports, he notes with approval the cleverly altered names. Should he ever be found out, he could conceivably lose his license to practise law in South Africa again, but that will not be important much longer.

A family affair is a torrid look into what makes many relationships tick; rape, abortion, incest and in this instance lesbianism.

Disclaimer: These first chapters from A Family Affair, the ones that are completely free, are a very early unedited version. Having decided you are enjoying the tale about Santie and Janet, may I suggest you lash out and buy the completely edited version. At only 99c each, that won't break the bank will it?

"There's a certain class of people who will do you in and then remain completely mystified by the depth of your pain."

Jan Jansen is a good looking man, going rather to seed, though it takes something of a cunning eye to recognize it.

His tailor has done a superb job and he looks successful and suave rather than obese and seedy. He reflects on the strange way the unexpected can sometimes happily resolve otherwise insoluble and particularly knotty problems; like the lack of a son and heir.

He is pretty philosophical about his three marriages. It wasn’t his wives’ fault that they all came to a bitter and recriminating end; and he is grateful that only one of them managed to dent what remained of the family fortune.

He did however have one deep disappointment. None of the unions, nor any of his mistresses for that matter, had provided him with progeny on either side of the proverbial blanket.

An only child, it did appear until very recently that the man would be the last of a long line of Jan Jansens, as the eldest son was always named, stretching back five generations. All were lawyers, living very comfortably in the the ancient city of Maastricht, made famous by its treaties and fit for a family of rich and successful advocates. They were known by friends simply as the Second or the Fourth.

Four generations of Jan Jansens had lived in splendor in a villa, laid in small but immaculate gardens along the River Maas, until the German officers crossed the Rhine. Their home was commandeered in 1940 by the Governor and two years later, razed to the ground by the Free Dutch.

An artist discovers his genius the day he dares not to please.

Not long after the War, his fortune halved, The Fourth emigrated to South Africa, hoping to start afresh. Unfortunately, along with the deprivations of the war, and the deep disappointment of having lost the family villa, bad luck continued to dog the Fourth’s footsteps; poor health and a wife who turned blind when she was twenty five. And a wayward only child; the Fifth.

Despite the man’s best efforts, his mother once told him that using a condom is like going to bed with your boots on, it seemed that the Fifth’s whole harem had conspired against both him and his eager millions of sperm cells. Ingenious cups and creams, gels and hormones had successfully frustrated the tiny creatures, and latterly some clever death traps ensured that any happy ova that did successfully mate went sailing unwittingly down the tubes to a perilous and unfruitful fate.

But finally, the man again chuckles gleefully, in a most unexpected field, his wild oats have finally taken root. At first somewhat perilously, given the state of modern medicine, but ultimately in a most promising and satisfying manner. He couldn’t have planned it better if he had tried.

It all came together at the annual office beach party, strangely the same day that he scored his only hole in one at the Royal Durban golf course. Altogether, a most royal day. Klein Jan is a very welcome, and quite unexpected gift, he laughs out aloud again.

Now, if Lady Luck continues her smiling ways, the Jansen dynasty will within the month have its heir. Of course, a son is not really enough; he has to be a Jansen. Well, Jensen will be close enough.

Klein Jan Jensen, he whispers happily. It sounds rather fine. 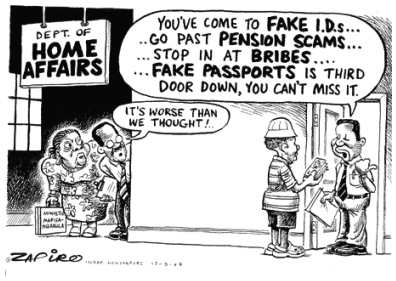 Bernard Preston is a semi retired chiropractor, self-opinionated greenie, solar geek and writer. You'll enjoy A Family Affair, though you may tear large chunks of hair out in parts. Jan Jansen is a monster.