Hot knife vs fork honey decapping has many pros and cons, especially for the beekeeper wanting to advertise a truly unheated, raw product.

I feel a bit of a turncoat, having used only the hot knife for close on sixty years, and now abandoned it in favour of the fork for decapping honey combs. 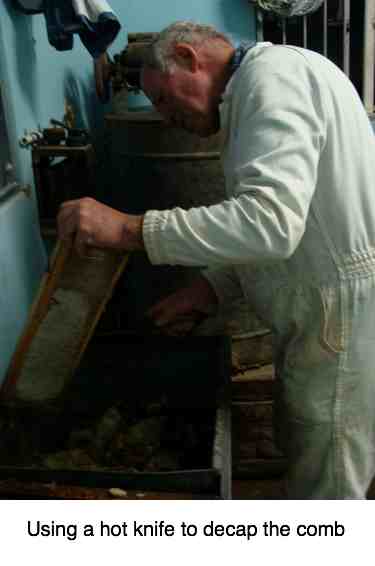 This page was last updated by Bernard Preston on 9th March, 2021.

Humans like bees are creatures of habit, and they are not always good; somehow we get stuck in our ways. Then, when another keeper suggests a different manner of doing things, we then defend our tried and tested method. New innovations always battle to break through our traditionalism.

Change of course is not always for the good, so a certain conservatism is not entirely bad. The death of my trusty decapping knife after sixty years of service was the stimulus to consider something different; and a visit to another beekeeper's honey-room.

The decapping fork was much cheaper than importing a new hot knife. It is also a lot lighter on the arm; less likelihood of getting tennis elbow. It is really a matter of personal preference. 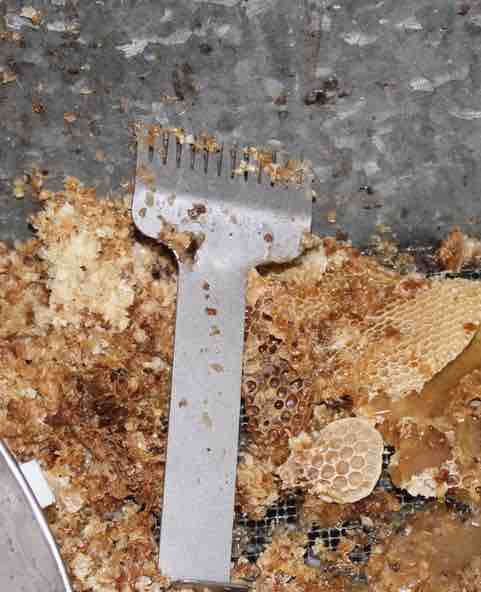 The hot knife vs fork honey decapping debate has slowly settled in my mind in favour of the latter.

The issues involved are:

There are no doubt other factors that may be of importance.

I proudly market a raw honey, lightly-filtered and rich in pollen, but Jiminy Cricket was forever pricking my conscience; a small proportion was exposed to the high temperature of the knife. Perhaps it was only 5 percent but it meant that the final product could not be described in all honesty as absolutely unheated.

The only way around that, and it was irksome, was to keep the gleanings completely separate from the bulk of the nectar; even then some of my best raw honey would have been exposed to the hot knife.

I soon realised that when comparing hot knife vs fork honey decapping that the former, my long tried and tested method, took a lot longer; that alone gave considerable impetus for change. I will do some measurements in the future, but I would estimate twice the time.

The fork removes far less honey in the gleanings.

At this stage I am still uncertain about which is more effective when comparing hot knife vs fork honey decapping. Measurements will follow at some time in the future to see if there is a difference in the extraction.

Likewise the fork produces less wax in the gleanings. In fact that may cause a shortage of new foundation. It does allow for deep stripping of the comb should one have a need for more.

The unexpected was that the fork butchered the combs and produced a lot of fragments that blocked the filter. However this was easily surmounted manually with a flat wooden pancake-spatula.

Whilst my original hot knife was quite light, the newly purchased item was much heavier and tired out the forearm; it is also a good deal hotter resulting in more damage to the honey, and frequently having to turn it off. But I do not particularly like the shape of the handle of the fork either, and will try some others.

In short, at the end of the day, both schools have their ardent enthusiasts who will stick to one or other of the hot knife vs fork honey decapping debate. I am the turncoat who for the present has swapped sides but old habits die hard.

I will not be totally convinced until I am sure as much honey can be extracted from the forked honeycomb, as from the one stripped with a hot knife.

Next will be to consider the plastic or steel needle roller tool for honey decapping; some call it uncapping. I hear that it is better still.

There's also apparently some research, according to Faithful to Nature[1] that heating honey raises the glycemic-index; that would mean an adverse effect on blood sugar, and make it fattening. I'm hunting for the confirmation from research.

Overall the insulin response to honey is significantly less than that of glucose.

German researchers found that there was considerable variation in different honeys, but overall the insulin response was 55% less than a glucose control. The GI of 5 of 8 supplied samples from the beekeepers federation was below 55; that's low. The exception was those from forests which were high in melezitose[2].

Unfortunately they never stated whether any of the honeys where heated or not.

Clearly this is a complex subject and whilst one can confidently state that the effect of the sugars in natural, raw honey is low on blood glucose one really has little idea of the effect of commercial bottles in the supermarket that invariably have been heated, and often adulterated with corn syrup.