Chiropractic Research gives vital clues as to the efficacy of manipulation. 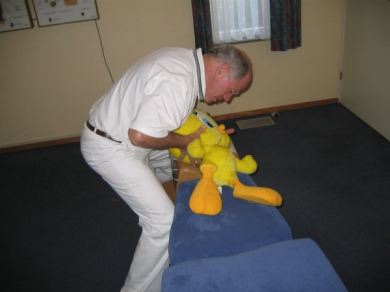 This page was last updated by Bernard Preston on 4 December, 2018.

"I believe in evidence. I believe in observation, measurement, and reasoning, confirmed by independent observers. I'll believe anything, no matter how wild and ridiculous, if there is evidence for it. The wilder and more ridiculous something is, however, the firmer and more solid the evidence will have to be."

Good research is utterly dependent on the integrity of the researchers. If they have an agenda, before the onset of their research, then they could even prove that the Earth is flat! Just like politicians, crooked researchers partake in murky science to prove their point. Mostly to prove that some therapy is scientifically outstanding, but sometimes said therapy is hogwash and, despite overwhelming evidence to the contrary, they are still peddling it. Murky science ...


Medical research into the effectiveness of Manipulation.

Chiropractic Research gives both the patient and the doctor confidence. The effectiveness of manipulation is no longer folklore but is undergirded by hard scientific research.

A summary of the findings of the Bone and Joint Decade's exhaustive research literature research came up with the following:

Do you get relief of pain and tingling in the arm by raising your arm? Bizarre? Not at all. SHOULDER ABDUCTION RELIEF sign.

Good research is utterly dependent on the integrity of the researcher and statitician. Damn lies statistics can be used to twist the facts; don't take everything at face value and particularly distrust the stats on your food labels... DAMN LIES STATISITICS

Do chiropractors belong in alternative or mainline health care?

Chiropractors have been at odds over this question, but a major consultation to address the question, has shown a clear mandate to their leaders to bring chiropractic into mainline health care system as the ‘spinal care experts’.

Adoption by the World Health Organization of the chiropractic term ‘neuro muscular skeletal’ brings the medical classification system in line with the chiropractic notion of function and disability of joints.

In the early years there is no doubt that Chiropractic failed to produce a reasonable volume of research. However, in the last 25 years, Chiropractic has an impressive record considering the absence of funding from the traditional sources that medicine enjoys. There is now an international network of full time researchers, the depth of which can be assessed by reading journals such as Journal of Manipulative and Physiological Therapeutics, a chiropractic journal. In addition many medical journals are accepting research done by chiropractors.

"In questions of science, the authority of a thousand is not worth the humble reasoning of a single individual."

Anecdotes certainly do not constitute research but they do give some ideas for researchers in search of research proposal topics. I personally for example eight months ago suffered from a severe sequestered disc in the lower back; surgery was recommended.

But of course, I decided to give chiropractic manipulation a one month trial to see if the severe thigh pain, numbness and weakness of the quadriceps muscle could be cured. This last weekend I climbed to 8600 feet up the Drakensberg mountains without the slightest problem from my back or leg. Femoral nerve damage.

But there is no research proving that chiropractic can cure a sequestered disc. This is an interesting anecdote but it has no scientific basis.

Basic science is now providing strong validation of how spinal fixations cause not only arthritis within the joints but increasing noxious stimulation of the spinal cord. Read more about the rationale for Chiropractic Therapy.

Chiropractors know that their treatment is effective for 1001 conditions, but now the challenge to prove it scientifically. RCT stands for Random Controlled Trials and, when double blinded, the gold standard of research.

Chronic and Acute Low Back Pain

‘Spine’ is probably one of the most esteemed medical journals. Spine has reported that, in a randomized controlled trial or RCT (one of the benchmark Chiropractic research trials) of patients with chronic back and neck pain, after 9 weeks of Chiropractic treatment 27% were completely without pain. In comparison only 9% of patients who received acupuncture and a miserly 5% of patients who took prescribed medication were pain free.

In another Spine research article Aure et al showed that in a group of 49 patients with chronic low back pain, preventing them from working, that 67% of those receiving manipulation were back at work after two months in comparison with 27% who received exercise only.

Spinal Manipulation is recommended in medical journals too.

A UCLA low back pain study published in Spine 30(19) found that: The fact that back pain patients have better satisfaction if they choose chiropractic care is now beyond debate. This has been consistently demonstrated by observational studies and randomized trials.

A review, reported in the British Medical Journal (June 2006): Over 1000 randomized, controlled trials of all treatments for LBP have now provided a "greatly improved' foundation for manipulation in the evidence-based management of LBP. Their conclusion is that spinal manipulation is recommended for both acute and chronic LBP, and that all surgery except discectomies (in cases that have not responded to conservative management) should be avoided. Diagnosis and treatment of Low Back Pain (LBP) - Koes, van Tulder and Thomas.

Moller et al (Journal of Joint Surgery) found that smoking was the single most important risk factor for the development of postoperative complications. (I know of no chiropractic research that would confirm this, but my experience in regard to our care endorses it absolutely. Damaged tissues need all the oxygen they can get, and it has been proved that smoking reduces the oxygen carrying capacity of blood by about 20%. B.P.)

Other research on cadavers confirmed the blockage of the arteries of smokers which supply the lumbar spine with oxygen rich blood, explaining why smokers have more back pain, and respond more poorly to all forms of treatment of the lumbar spine.


ANTI INFLAMMATORY DRUGS have so-called anticholinergic side effects. They block the transfer of information from one nerve to another causing memory loss, foggy brain and blurred vision.

Read more about 'anticholinergic side effects' by typing it into this Google search engine.

Much of the mystery has gone from enjoying a long and healthy life. Just a couple walnuts a day, less than three helpings of red meat per week, no colas... the simple little things.

DISEASES OF THE IMMUNE SYSTEM

How often it seems that "the establishment" pours scorn on startling and novel new ideas. The new idea promulgated in 1895, for example, that the health of the spine has a vital impact on the whole of health. Now consider this one: a top medical researcher is infecting his patients with weak immune systems with worms! And getting quite a lot of flack from the establishment. He thinks it might even be the cure for Multiple Sclerosis - we watch with interest. Startling new treatment for DISEASES OF THE IMMUNE SYSTEM.

This rib pain treatment casefile convinces me that the treatment of choice for rib conditions is indubitably Chiropractic. But then I'm also undoubtedly highly biased! RIB PAIN TREATMENT CaseFile ...

Researchers have found that there is a 400x greater chance of a dissection of the inner wall of an artery in the neck during the twelve months following a whiplash injury. Because of the serious complications of this condition, manipulation of the neck following whiplash, even as long as twelve or more months, should be very carefully and gently done.

A dissertation from COLLEGE RESEARCH TOPICS is a requirement at the more advanced colleges.