Bettercreme sucks is the first time I've taken a personal umbrage to a product. Actually that's not quite true; I have a page somewhere on Marmite for much the same sort of creative accounting and deception, about hydrogenated fats. Provided there is less than 0.5g they can round it off to zero; lies, damn lies and statistics.

There's only one amount of hydrogenated fat that can be recommended and that's 0.00000g per year. That should be our goal, not achievable of course, especially with the deceit food companies use. Marmite is otherwise a great food. 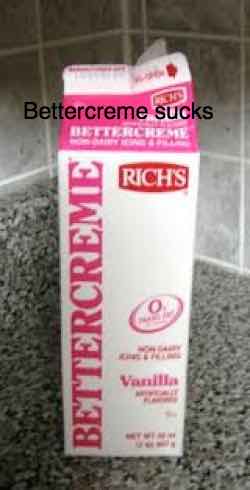 This page was last updated by Bernard Preston on 8th July, 2019.

This stuff is gross and anybody who lets it past his or her lips needs their head read.

What finally enraged me was the lies and deceit on the website; more about that later.

The problem is that if you purchase a cake at the local bakery, there is a fair chance that it has been topped with one of Rich's whipped icings.

The website describes it as the preferred icing of choice in tests across the United States. That doesn't impress me, particularly as America is one of the most obese nations on earth, and the average person by sixty is suffering from three distinct diseases.

Perhaps Bettercreme does taste nicer than traditional buttercream, but like he who considers only price when buying an article, we become fair game for unscrupulous marketeers.

So, what is it that has me incensed? Many things but the first is the senior marketing manager's remarks about cakes being vital for a baker's profits, and raising the bottom line; at the cost of the nation's wellbeing.

The second is that it contains high fructose corn syrup, and thirdly the long list of chemicals to stabilise, emulsify and flavour the product.

Worst of all is the double speak about hydrogenated foods; there is oodles of research about the toxic nature of this substance.

Then we can add the comment that they are doing what is right for the environment. Cleverly there is no mention of what the destruction of forests to plant palm trees for their oil is doing to the orangutan's habitat.

Bettercreme sucks for many reasons but topping the list is the lies and deception on the website. Let's start there.

On the website, and I quote, there are 'zero grams of trans fat.' These are toxic oils, quite foreign to the human body, that are at the root of much of the inflammation suffered by Americans; in their muscles, joints, organs and blood vessels.

Yet, if you read on the carton, it says that Bettercreme is made up of 'fully hydrogenated palm oil.'

So, which is it, Ms Boyd? Zero grams of trans fatty acids, or fully hydrogenated palm oil? It can't be both.

If you read the literature about  high fructose corn syrup, you'll find that it is controversial, but increasingly the weight of evidence is showing that long term consumption of HFCS leads to abnormal increases in body fat, especially around the abdomen, and a rise in circulating blood fats.

Of interest is that the average consumption of sugar in 1900 was 4kg per person, in 1940 it was 20kg, and today over 100kg; it exactly parallels the rise in obesity and type two diabetes.

Do a rough calculation; how much sugar did you consume today?

Then we had that the product contains at least six different chemicals that act as stabilisers, emulsifier, preservatives and flavouring; these are recognised substances that they are entitled to use, but I for one wouldn't touch.

You can be the judge whether you want so many chemicals in just the whipped icing that so many consumers love; now add to that all the substances added to the cake by the bakers.

Of course all of this needs to be judged in the context of the overall meal planning. If you are putting on pounds around the waist, and your blood fats are rising, then you too may come to the conclusion that bettercreme sucks if you are eating it on a regular basis.

You enjoy a bought cake only once a month perhaps? Then don't fuss. But I for one would not touch the stuff; you be the judge.

What I also find odd is that the bakers at supermarkets use bettercreme to decorate their cakes, but they don't stock it; I wonder why not.

I've just been to a seminar in which a researcher who is a world authority stated that the average person by sixty is suffering from three distinct diseases. Obviously Bettercreme sucks isn't the whole problem; in fact it might only be a small part of the picture. It was the lies about hydrogenated oils that got my back up.

We use only 100% wholemeal flour for our baking; it is true that it isn't so soft that it slides down your throat like icecream. But it does contain all the minerals, vitamins and fibre that our bodies demand for optimum wellness.

Very occasionally I will accept a slice of cake that could have bettercreme sucks; perhaps that's one of the reasons why the boss and I at 70 have no serious diseases; yes, she does have some Heberdon's nodes on her fingers that trouble a little periodically.

Butter and better; cream and creme

Whenever you see a play on words like butter and better, cream and creme, look further; they are hoping that you'll give it only a cursory look and presume this is natural dairy. It's all part of the Bettercreme sucks deception.

Interestingly butter is back, and never should have been banished to Coventry; but we should never eat hydrogenated foods.

There's a disease called orthorhexia in which we become so obsessed with our food, what we will and won't eat; it's a fine line between health nut neurosis and simply wanting to keep out of the clutches of doctors.

Bernard is a semiretired DC with a passion for the prevention of disease; that means more exercise and making certain we enjoy nutritious foods, and absolutely avoiding the likes of Bettercreme sucks.