Warring Souls is a "stone in the shoe" book for Christians; I found it irritating that corn under my transverse-arch.

Here is a review by Rev. Ron Nicholson.

“O come let us adore him,” we sing at Christmas time.

But who are we adoring? The carol tells us in the 2nd verse; “God of God, Light of Light, he is the very God, begotten not created.”  But what does that mean? The words from the carol are taken from the words of our traditional Christian-creeds. 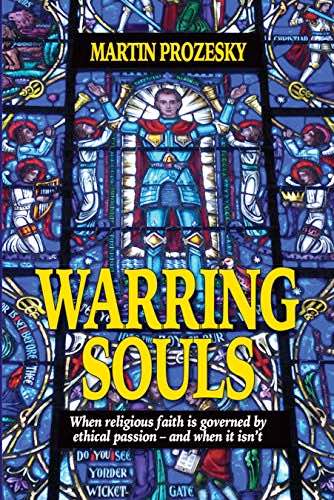 For many Christians unless they know a good deal about 3rd century Greek philosophy these are just words. In the 3rd Century good Believers were trying to sum up what Jesus meant to them and  how they understood him in ways that were consistent with their world view and culture. What does he mean to us today?

Martin Prozesky has written a book which is different from his other more academic tomes. It is a novel. Or is it a volume on travel, because there are lyrical descriptions of the Southern-Cape which made me want to revisit places which I once knew quite well? Or is it a theological treatise?

We know it is a novel because it is a story about people.

Like any people, the characters in the novel sometimes fall in love albeit rather discreetly. They have thrilling, and somewhat scary, adventures. They also quarrel. In their contrariness they form groups and counter associations. It is set in a fictional Anglican-seminary which seems to operate more like a university.

If it is like a university then there must be freedom of speech and permission to follow what the researcher sees as truth, whatever that may be.

This is, however, an Anglican seminary. Should it not therefore reflect what religious people see as the truth?

Anglicans however don’t always agree in some respects on what the truth is. Indeed, Christian and Anglican belief takes many forms, from fundamentalism where every word in the Bible is taken to be literally true, through to those who question the idea of a personal God altogether.

Although all claiming to be Christian, some groups would not regard others as Believers at all.

Warring Souls includes people of almost every shade across this spectrum, but essentially it is the story of Sarah, who is on the liberal side, and Gerald, who is much more conservative, and their rival claims to be Christian.

Can Gerald accept Sarah’s views as Christian and Anglican?

"Warring Souls is for those mature Believers who are able to contemplate and consider ideas that may be at variance with their own."

So Warring Souls is a novel, but one based on wide knowledge of the varieties of Christian belief and, although Sarah is the heroine of the story, Prozesky reflects all these shades with accuracy and fairness. Though there is one “villain” who seems to have an eye on the filthy-lucre, the others are all of them seeking to be faithful to the truth. Yet they don’t agree on the truth.

Over the centuries Christian belief has had to accommodate new truths, often with difficulty.  500 years ago Copernicus taught us that the world revolves around the sun, which Believers at the time thought incompatible with the Bible.

150 years ago Darwin taught us that all beings on earth have gradually evolved over billions of years, which some Christians still believe is incompatible with the Bible.

In our own time a group of Biblical scholars formed what they called the "Jesus seminar,” using textual and historical methods to try to suggest what he was really like and what he taught. Many Christians would say their conclusions are incompatible with the scriptures as they understand it.

So who is truly Christian? People come to terms with new discoveries and new philosophies in different ways, but how far can one go from the tradition while still being accepted as a Believer?

How do people with seemingly such different views come together as a Christian community?

This is essentially what the book is about. Can the characters accept one another as Christians, and on what basis? Although the novel does not touch on the issue of sexuality it is a fact that the world-wide Anglican communion (as in some other churches) has come very close to splitting over their views in recent years and may still do so.

Rival Anglican churches are springing up claiming that others are un-Christian. A character in the novel quotes William Temple, famous Archbishop of Canterbury 60 years ago. “Moral progress means enlarging the circle of your concern."

How far can we enlarge that circle and still be Christian?

The present Archbishop of Canterbury was questioned a few weeks ago about how far we can enlarge the circle over the issue of sexuality. He admits there is profound conflict, but in his own words believes we can still “disagree well.”

To quote him, “There is this struggle to see how you live in love and unity when you disagree with one another; and there are conflicting beliefs as well.

Of course it matters what we disagree on. These arguments are incredibly important, not only about sexuality, but about numerous other things within the Church.

But do we live out that disagreement in a way that demonstrates that we are caught up in the love of God and of Christ? Or do we sort them out in a way that says we’re behaving like a political party having a row?

The quarrel in Warring Souls does seem like a political-party having a row. Can they resolve it? Can they disagree well? What can they have in common which enables them to accept one another as Christian? It is a very contemporary issue.

Christian groups still struggle and often fail to find each other.

The novel suggests the way forward.

I found the way forward which the novel suggests of great help to me in a time of personal questioning after an illness. Do read it to see.

Copies of Warring Souls can be obtained from Porcupine Press[1] at its online bookstore, or from the author at marproz[at]mweb[dot]co.za, or by ordering it from your bookshop. It is also available as an eBook from Amazon.