Special honey is a beautiful short-story by Geoff Elliott.

We had a farm in Africa.

It was right in the wilds of Africa. It had mambas and pythons, and a great variety of birds and wildlife. Resident on the farm were a few Zulu families as well; the Sitholes, the Mhlongos and the Mbonas. And old Dlamini who this story is really about.

In those days farmers' sons, such as we were, walked safely barefoot over all the lands and it was not unusual to spend a day out in the open with your brother, with an old shotgun and a single-shot .22 rifle; exploring and investigating. 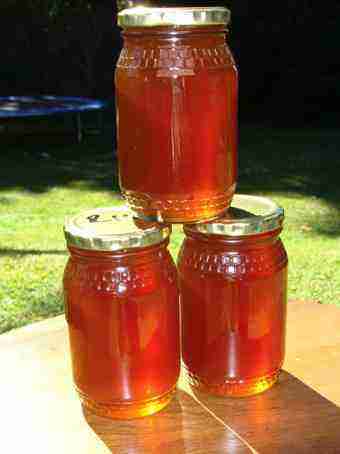 On our various adventures, it was common to be observed discreetly at all times by some of the Zulu umfaans who kept their distance but could be heard walking nearby through the long grass and thorn trees. Partly we always assumed to see what the boss’s sons were up to but also to ensure that the many elicit dagga gardens cultivated by the locals were not disturbed in any way.

The farm was neatly divided in two large grazing-camps that ran through the centre of the property and bisected what used to be the owner’s garden and went past his dilapidated old house, which had now been abandoned for many years. We still used the stock-handling facilities there and were often to be found sitting on the substantial verandah, with its grapevine, having our lunch and tea prepared by Dlamini.

Dlamini was a bachelor and lived in a two-hut kraal and was the caretaker of the old house and yard; and the hundred or so very wild Dorper sheep that roamed freely on the farm with their white bodies, black heads and extremely fat tails. These were securely locked in a small kraal next to Dlamini’s huts each night.

The empty house was still intact in many ways, even down to having running-water at the kitchen sink, supplied by a borehole and an extremely temperamental windmill that chose randomly whether to work or not.

Special honey is by an author potentially as good as the great George Elliott but he has been hiding his light under a bushel.

Under the floorboards of what used to be the lounge, an enormous swarm of bees had established themselves. These were wild and untamed, as suited the outside environment, but were able to produce substantial amounts of honey, being constantly busy in the grapevine and in the surrounding flowering thorn trees.

Magnificent honey quite unlike what you might find in the shops.

The honey was in a class of its own, with a special unique flavour.

Special honey which once a year, in the depths of the cold of winter, when the bees were at their most dormant, Dlamini would ask permission to raid the hive for the nectar, which he would then sell on for his own benefit.

This permission was always speedily granted, as for compensation he was instructed to supply our family with four bottles of pure gold. The rest was his, to do what he wished with. We were beef and sheep farmers and not really “into” honey and wild-bees.

Our four bottles were treasured and rationed to last the full year until the next harvest. On special occasions a bottle would be brought out and shared equally amongst present guests and family. And stories would be told of the source and of Dlamini's bravery, or was it foolhardiness, in raiding the wild bees under the floorboards. And of his constant success in supplying us annually with the delectable treat.

This was, of course, not the only treat that emanated from the farmhouse and environs. Once a year a great expedition was planned. Kerol was bought, knives were sharpened, surgical instruments were sterilized and off we went to castrate the young rams from last season's “crop”. We were helped by the Zulu men on the farm who had not gone to Jo’burg or Kimberley to seek work and helped occasionally for us on a task basis when unable to find gainful employment elsewhere.

In those days, the men all wore traditional “beshu’s” of oxhide at the back and mongoose tails and strips of leather at the front, concealing their manhood; no t-shirt, overalls or jerseys. It was a warm climate and we were men. Sandals were made from cut out car tyres, wire and strips of leather; and that was it.

The debate was often similar to the old question as to what “what does a Scotchman wear under his kilt?"

But became “what does a Zulu wear under his beshu?” Often nothing I can vouch from many an inspection. Dlamini was a skinny old soul in a field of strapping young-men, and the only concession he made to his age in the cold weather was to wear a pair of socks with his car tyre sandals to keep his feet warm.

The castrating of the rams was always a special occasion. We would arrive on the farm to be greeted by the sheep shut in their kraal, a few willing helpers rounded up by Dlamini and a number of umfaans crowded round a fire expectantly awaiting their treats; all dressed in beshus and sandals, except Dlamini, who would have his socks on as well.

A young ram would be caught and dumped on the table. The sharpened knife and the surgical instrument used in the final act, lay submerged in a great enamel-bowl of kerol and water. The knife was used first and then the instrument that severed the testicle and crimped the blood vessels to prevent excessive bleeding; commonly known as the “nutcracker”. The result of the operation was then thrown in the direction of the waiting umfaans who would deftly catch it; budding cricketers were these young men. They would then rush over to the fire to cook and eat the delicacy.

The process was repeated many times with the usual banter and conversations to pass the time. Who would be held down after the last lamb and have a similar procedure acted on them? Dlamini was a bachelor and it was usually agreed that he should be the final victim as he had no use for that part of his anatomy.

However he was always one step ahead of his helpers and when the last sheep had been done, he was nowhere to be found, having safely retired to the kitchen to boil the water on the old wood stove for the obligatory cup of tea to be enjoyed with our packed-lunch.

And then, one year, on a cold day in the July school holidays, we were told that there was a substantial flock of guinea fowl on the farm. We rounded up our shotguns and jumped into the old trusty Chevrolet C10 truck and sped off for some shooting. We had long ago worked out the best route to the farm on the backroads to avoid the traffic police and awkward questions about our age and whether we had a driver’s licence or not.

Having had some sport with the guinea-fowl, we retired to the house discovering that Dlamini was nowhere to be found. There was a fierce and angry hum that could be heard 30 metres away, and stroppy bees would be seen buzzying about on the verandah and in the old diningroom.

Dlamini had raided the hive and the bees were angry. Was Dlamini okay or had he been trapped under the floorboards this time? We cautiously investigated, approaching from direction of the kitchen. The sink was piled high with combs literally dripping his special honey. There was no sign of Dlamini though; he had apparently gone to town, it was later discovered.

We lit the old wood stove, boiled the water and made ourselves a cup of tea, all the while admiring the huge pile of comb placed in the sink and draining-board. The honey was of its usual quality and was trickling down into the sink but it was not filling. Further investigation was called for.

On opening the cupboards under the sink, the secret of the unique flavour and clarity of Dlamini’s special honey was discovered. The drainage pipe had been disconnected and the honey was happily draining through one of Dlamini’s old socks that had been tied in place; and then dripped clean and filtered into the aforementioned great enamel bowl on the floor of the cupboard.

Each beekeeper makes his or her own special honey; the less processed the better. 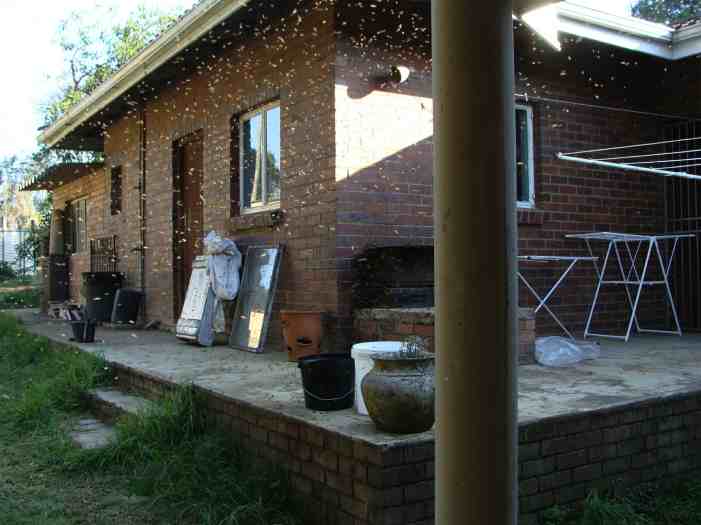