Latent heat fusion, or melting actually, is the magic that saves us from being flooded every spring. It's also the principle that mysteriously brought me kicking and struggling into the Kingdom of Heaven.

There's a common perception that the Christian faith and science are at loggerheads; that is not so.

This page was last updated by Bernard Preston on 18th October, 2021.

The miraculous shape of the water molecule 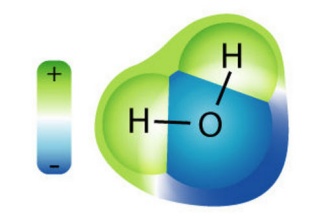 I was riding today, a raw winter morning, on my way to the shops, saying the Lord's prayer which I had neglected earlier. I found myself reflecting on the fact that it was Latent Heat, more specifically that of water, that really finally convinced me that this world without a Creator is just the purest nonsense.

You see it's February in Holland, and there was just the first sign of a thaw. 1*C said the  roadside thermometer, but that did not mean that suddenly every crystal of snow and ice turned into water. Why is that? What is it that saves us from a flood every spring when the temperature first rises just above freezing? It is latent heat of fusion.

It was more that forty-years ago and I was part of a group of Mountain Club members who had labored up Gray's Pass in the Drakensberg in heavy snow. We were well kitted out, so there was no real risk; one of the things I did in those crazy days just for fun.

First it was the latent heat of fusion that really ratted on us. We weren't expecting the cold, and melting the snow for our soup used a good deal more benzine than we had catered for.

Of course, the latent heat of condensation came as no surprise; many of us were scientists, so we knew that it took a great deal of energy to turn water into the steam needed to cook our rice.

But then the next morning, we woke up to a magical world. 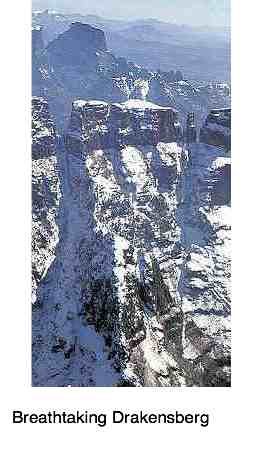 As the thaw began, my then unknown companion, Geoff, and I started to talk informally about how the latent heat of melting, it's the same as fusion, was what saved the world from a mass-flood every spring. Without it, all that ice and snow would have instantly turned back into water.

So what is the latent heat of fusion? It's that amount of energy that is required to turn water into ice, or vice versa for that matter, without a change of temperature.

Jup, that's it. It takes energy to turn a solid into a liquid without it getting even one tenth of a degree warmer; and vice versa.

And for water it takes an astonishing amount of energy; of kJ per kg. Far more than other common substances.

If you want to be a scientist then we talk about moles and joules, and other stuff, but that's not important. It is the principle that counts. It takes one heck of a lot of energy to turn snow at 0*C into water still at zero.

And without that one little fact, the Earth would be virtually uninhabitable; literally. Water would evaporate at the drop of hat causing massive-storms as the seas evaporated, and flooding, and any snow on our mountains would turn instantly flood the rivers as soon as the temperature rose to half a degree above freezing.

And so the great search began. Talking as one scientist to another, one beggar telling another where to find bread, Geoff started to share with me how knowing Jesus Christ as his friend had brought meaning to his life.

You can read about my own struggle to find joy in this seemingly meaningless world in this chapter from Frog in my Throat, my first book of coalface anecdotes. 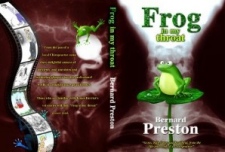 A bit of science 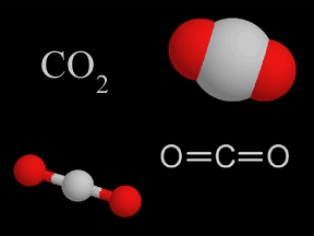 Life on Earth can only exist because of one tiny fact; the water molecule isn't like it's first cousin, carbon dioxide. CO2 is linear. If water was like that I wouldn't be writing this page. Because I wouldn't be; nor would you.

We won't go into the chemistry of it, but to put it simply, the electrons of oxygen are arranged in such a way in water so that the hydrogens are distorted. To be exact, in fact the H-O-H angle is 104.5* whereas in CO2 it's 180 degrees of course. That little difference is what distinguishes between life and no-existence. Could that have happened by chance?

As a scientist I found the belief that water has this odd shape came about by mere chance far more improbable than the watch on my arm could simply appear by a random occurrence. And I still don't.

And the genome of a fruit fly is a million times more complex that the water molecule. Is that also chance? What about you and me? Is it all about a statistical improbability? No way, Jose. Both my watch, the water molecule, and the whole complexity of creation demand a creator. 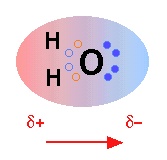 The long and the short of it is that water is a 'polar' molecule; it binds ferociously onto its nearest neighbour, and takes a lot of convincing that he must let go. That's Latent Heat of Fusion and Evaporation. 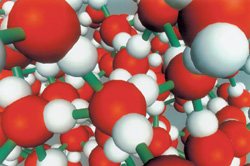 A not so small miracle

My scientifically-trained mind finally had to admit that this magnificent world could not have come about by accident. The design and planning that went into it spoke powerfully to me of a Creator.

What really cemented it though was a supernatural healing. That too I couldn't explain away.

It happened this way. Whilst playing squash against young John Davenport (where are you, young man) I inadvertently put my ankle into the corner between floor and wall. My ankle turned, and I immediately experienced the most exquisite pain that I have so far felt.Editing this page, now aged 73, I still think it was the worst I have ever experienced.

And despite medical treatment, it went on hurting; bad. And disabling, for months, the slightest depression in the ground, a small pebble and my ankle would turn again; and swell again, turning purple. And once more, regularly; I had to give up squash completely. 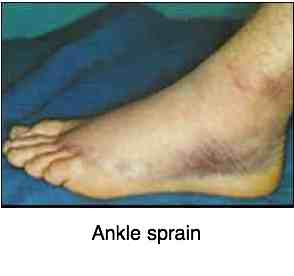 Then my knee started to hurt, I suppose from poor-gait. There was no injury, it was just reacting to a disabled ankle. This went on for six months, and I was miserable.

Then a good friend, a Christian, asked me why I was limping. At that stage, I was a science and math teacher, and had no inkling of the connectivity of the body. How a bad ankle could cause a painful knee.

So, I told him, my knee was sore, and I had no idea why as I hadn't injured it.

Two weeks later, Harold remarked that I was walking better. I confess I hadn't really noticed, but yes, the pain had gone. Then he told me he'd been praying for my knee; for me the real miracle was that he knew nothing of my ankle.

Not only my knee was healed, but my ankle. From that day I've never again had ankle problems. Within a couple weeks I was playing squash again as though nothing had ever happened. And that I couldn't explain away with any plausible arguments. I had been miraculously and permanently healed, and not through my own faith at all.

Thank you, Harold, you are a true man of faith.

What perhaps might be bizarre to some is that the theory of Darwin doesn't bother me one iota. Newton discovered the law of gravity, the principle that God created to stop us from flying off into space under the influence of the centrifugal force of a spinning body, and keeping the Earth in orbit around the sun. Darwin may have discovered how God went about Creation. Does that bother me? Not in the slightest.

In fact I think it's one huge red herring, drawing us away from the fact that God, in Jesus Christ, loves us with an everlasting compassion. That we are a fallen people, and He is going to call us one day to account.

And that in Jesus Christ we have complete and total forgiveness of our sin. "It is done," He cried. He paid the price for my wicked deeds.

Richard Dawkins may taunt me about believing in fairies at the bottom of my garden. So be it. He has faith in an even greater improbability; that the water molecule, and all that goes with it came about as a mere accident of chance. As my friend Geoff said: "That's like believing that your watch came about by a flash of lightning, some sand was turned into glass, and iron ore into steel."

Isn't more sensible to believe that my watch has the stamp of a creator? And so does the water molecule and its massive Latent Heat of Fusion. 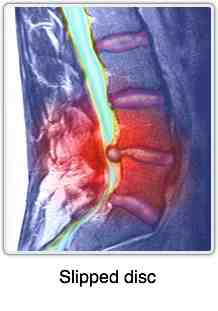 Forty years ago when I trained as a DC was long before the discovery of MRI. I had no idea at the time, but the fact that water has polar-properties was going to become profoundly important in my life for another completely different reason.

Therein lies the reason that all the water molecules in our bodies will line up in a powerful magnetic field, and so make this magnificent scan of the spine possible. Without the dipolar nature of water, we couldn't make MRIs. We are beautifully, fearfully and wonderfully made.

Yes, I believe in an all powerful God who created the heavens and the earth.

And in his only begotten (not created) Son, Jesus Christ. 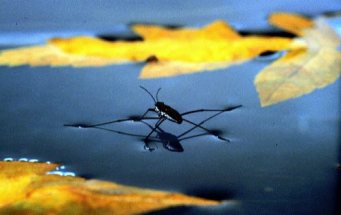 Isn't she beautiful? The polar nature of water has many vital effects, nothing to do with Latent Heat Fusion, but just as important to life. It creates the 'skin' on on our ponds enabling this little guy to walk on water; it makes ice float instead of sink too. I could go on nauseatingly. There is a Creator, believe you me. And astonishingly He loves us, what's more.

Fairies? Well, if the famous artist Rodin can believe there is nymph dwelling in every tree, then I can believe in a Creator God!

I am quite sure there is a nymph living in every apple tree actually. The fruit is God's gift to the unhappy colon.

Our page about the humble apple tells of the pectin that is a starch very resistant to digestion and absorption in the small intestine. The double blessing is no blood sugar surge, and feeding the very important microbiota in the colon; that means less neurodegenerative conditions like Parkinson's disease. These bugs are able to synthesise dopamine.

An apple a day may have started out as being an old wives' tale, but today it is firmly established in science. Use the site search in the menu above to find that research.