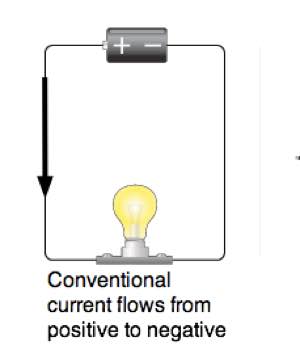 How diodes work brings you part two of their use in the solar environment.

But first we'll start with a little simple physics; early scientists didn't know about electrons but they did discover electric current. But they didn't know which way it flowed.

So they made a convention; current flows from the positive terminal of the battery, through the globe, and back to the negative.

This page was last updated by Bernard Preston on 23rd December, 2018.

But they were wrong; the flow of electrons is actually from the negative pole of the battery through the globe, and back to the positive.

And there's been confusion ever since because an electric current is a flow of electrons; from the negative pole of the battery to the positive. 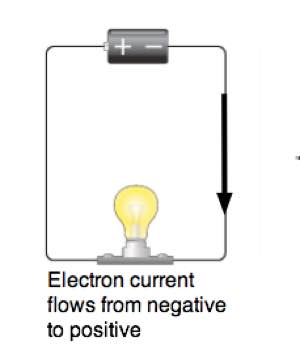 A diode is an inexpensive little device that allows this flow of electrons to go in one direction only. As we will see shortly, the situation may change when using solar panels, and the current wants to reverse, draining your battery at night.

You must stop that; enter the diode.

Our diode has two leads; one is called negative, though it's not really, and is known as the cathode, but confusingly given the symbol k.

I think it's German for kathode.

The cathode is marked on the device with a line; conventional current can only flow in the direction of the arrow.

The other lead naturally is the positive and called the anode.

Below are two diodes; the top one is a low current device that will only carry a couple of amps.

That below is a stud diode for use in high current; as when you are using several large PVs producing hundreds of watts.

In both cases, note firstly the arrow showing the direction in which the conventional current is allowed to flow.

Secondly, note the line depicting the cathode. Conventional current is prevented from flowing from right to left, bottom to top, into the negative side of the diode.

Adding to the confusion is that a diode doesn't really have a positive and a negative lead; the voltage on the cathode side is simply slightly lower than the anode. 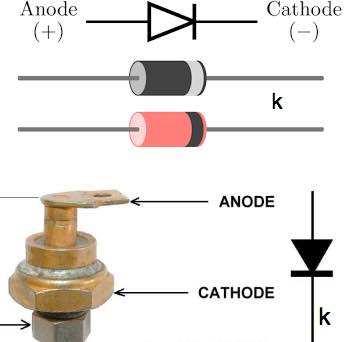 The important thing to grasp is that the conventional current will be blocked if it tries to enter from the k side. Let's look at a very useful application of this.

Let's say you want to use a small PV panel that is generating a current in bright sunshine at 25V to charge a 12V gel cell battery as is used in many gate motors, for example.

During the day, the voltage in the PV is higher than in the battery, so it drives the conventional current in the direction showed; into the positive terminal of the battery. It is charging the battery, providing surplus power that will drive your gate motor. 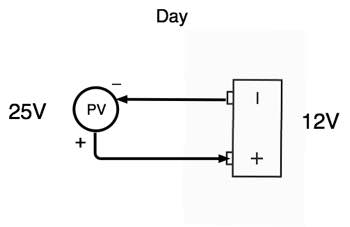 But what happens at night?

At night the voltage from the PV panel drops to zero, with no photons landing on it, and your 12V gel cell battery has the higher voltage; it will discharge (go flat) through the panel. 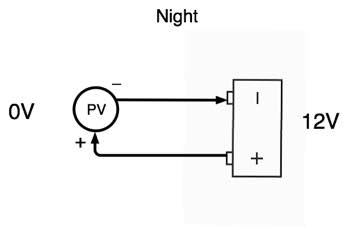 At sundown you have a full charged battery and you wake up the next morning, and you can't open the gate; your battery has gone flat.

Notice that the battery now has the higher voltage, so the current reverses and your PV instead of collecting energy from the heavens, discharges it.

Enter the diode which can be used to stop this reverse current.

Conventional current flowing out and being lost from the + of the battery to the PV is blocked by the diode. 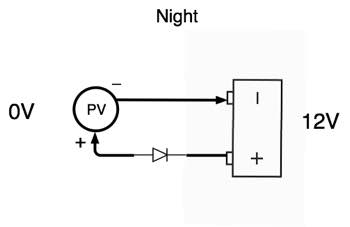 This is an immensely useful characteristic of how diodes work. You may still want to disconnect the motor from the battery every night when you go to bed; keeping the circuit alive during the night also uses power and drains the battery.

How diodes work are particularly useful too when you have one or more unequal solar panels charging a battery. The second PV may overpower the first.

Let's say that your one 15W panel is not proving sufficient to power the electric motor that opens and closes your gates. That may because there are many cars coming and going, but it could also be due to the fact that the panel is facing due north (in the Southern hemisphere) and after noon it soon supplies insufficient energy.

Or in winter, the declination of the sun means less power, or even inclement weather. You need more power so you acquire another panel, but it may not supply the same number of watts, or have the same voltage.

Let's consider a situation where you have two PV panels in different locations, perhaps because of shadows, charging the battery.

Both must have diodes so that at night when the voltage in the PVs drops to zero, the current cannot reverse.

But here we have an added complication. The PVs have different voltages; one is 25V and the other 28V.

It's generally recommended that you use PVs of the same voltage, as the more powerful one will drive the current backwards in the 25V panel.

But as you can see the current cannot reverse in the 25V PV because of the diode. Such useful little devices, so can use PVs of unequal voltage. 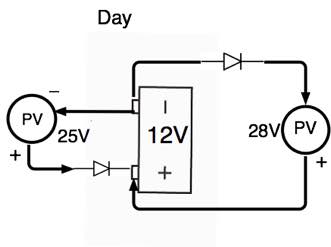 This morning I'll take some photos showing you the actual set up.

(Apologies for the delay; I'm currently working overseas for a month, and this is on hold until September)

A solar powered generator is one reason for writing this blog; there are of course many other applications for which knowing how diodes work is important.

Whilst going off the grid is only for those with the money to purchase a huge bank of batteries, or a water turbine that will generate energy during the night and inclement weather, a solar powered generator means you can produce most of your own electricity. After sundown you reply on your utility to supply stoves for example.

Bernard Preston is no electronic specialist but as a physics major he has enough background to know how diodes work; they are an essential device when planning to build a solar powered generator, or a solar powered gate motor.

One is high voltage AC, the other low voltage DC; both are important in the solar environment.