Carpet South Africa with Spekboom is about a wonderful indigenous tree that soaks up an incredible amount of carbon-dioxide from the atmosphere.

Rumour has it that our national flower is about to go the way of Die Stem, Afrikaans universities and the old South-African flag. And our cricket teams are about to be renamed the Porkies. 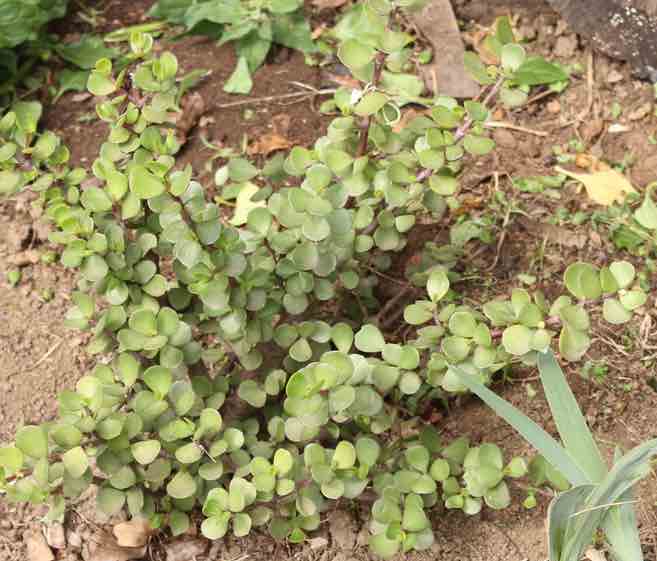 I am kidding of course. Long live the unforgettable protea, but there has been considerable interest of late in the Spekboom, also known as the Porkbush; Portulacaria afra.

Mostly at our green home, in my half of the garden anyway, we look to plants that produce food. However, those that secrete prolific amounts of nectar like the Halleria Lucida, particularly if they are indigenous, always get a look in. Martin Roberts in A History of South Africa describes the honey from the Spekboom as unsurpassed in flavour and texture.

That is not faint praise, and caught this beekeeper’s eye. Personally I have no experience of the honey from the Spekboom, but our first shrub is six months old and flourishing; given time I am told it will grow into a small tree.

It is clearly a succulent and we look forward to the carpet of pink flowers, small and star-shaped according to SANBI; they are apparently a rich source of nectar, for insects and beekeepers. I look forward to seeing how the resident sunbirds take to the flowers too.

It is very easy to propagate apparently, so the nurseries will not be making a huge profit; simply break off a twig and stick it into some Umgeni grit, and keep it moist but not wet. She with the green thumb is going to try her hand.

With more credible scientific information confirming that the prophets of doom have in fact been spot-on about catastrophic global warming, with signs of irreversible climate change all around for us to see, what is particularly interesting about the Spekboom is its ability to act as a carbon sink.

Far more than most plants, it is has the ability to capture some of the vast amounts of toxic gases from the atmosphere that those coal-fired power stations in Mpumalanga are poisoning South Africa and its people with.

We have such vast tracts of ground under bugweed and other nasty invaders, especially where those beautiful old gums, also under the hammer, have been laid low.

Would it not be wonderful if everyone reading this cut back just one bugweed and planted an indigenous plant like Halleria or Spekboom? They are very pretty with oodles of nectar for the seriously threatened bees; make it your small contribution to save the planet from greenhouse gases.

As an aside you will notice that local honey has risen in price and in fact may soon be unavailable. I am fairly sure that it is because of the extremely dry late summer, winter and now spring. We have had fat-years, and it is inevitable that there would be a lean one, hopefully not seven, to follow. Even as I write the gentle spit of the fly is bringing hope that the rains have started.

We have had to resort to Umgeni for the last month; that is a disaster in our green home, but I hear a steady trickle of rainwater into our underground reservoir; it was cheaper than plastic tanks incidentally.

It is all about each and every person taking a determined stand to do something to save the planet from those invasive humans; they are so destructive that they are burning their own home. In time the seas will rise, 30m if the scientists are to be believed, putting out those fires and drowning their cities; end of problem.

Yes, I know the Cradle of Mankind is to be found in the Magaliesberg and all of us, black and white find our roots in South Africa. None of us are invaders, only we behave like we are.

Carpet South Africa with spekboom that absorbes huge amounts of carbon-dioxide from the atmosphere and provides copious buckets of nectar for honeybees.

Spekboom can sequester at least two tons of CO2 per year for each acre planted, making it more effective than those in the Amazon rain-forest. What is left of it; the trees are being hacked down for timber and to make way for soyabeans. Increasingly we live in a world demanding vast acres of vegetable protein.

As I update this page on 1st May, 2020 we are indeed into another fat-year for the beekeeper. We have had abundant rains and our spekboom is flourishing, but not flowering yet.

As an aside we are currently locked down under the weight of the misery that is known as the coronavirus; is it not interesting that the bug has flourished in those parts of the world where air pollution is severe? Perhaps that is why we have been spared at not least in part because South Africans are carpetting their country with spekboom.